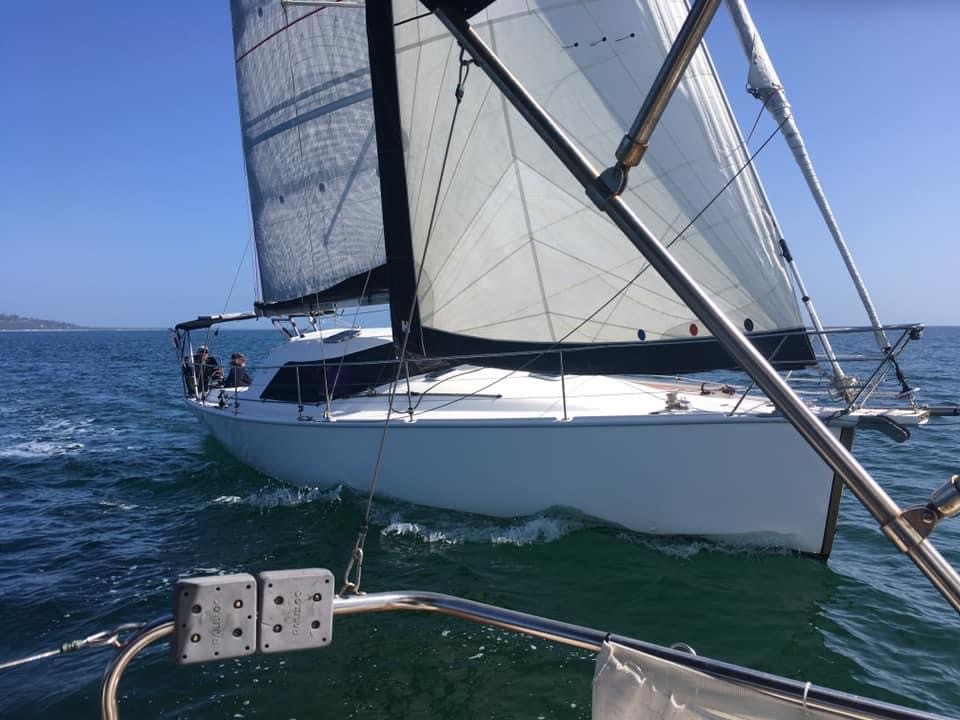 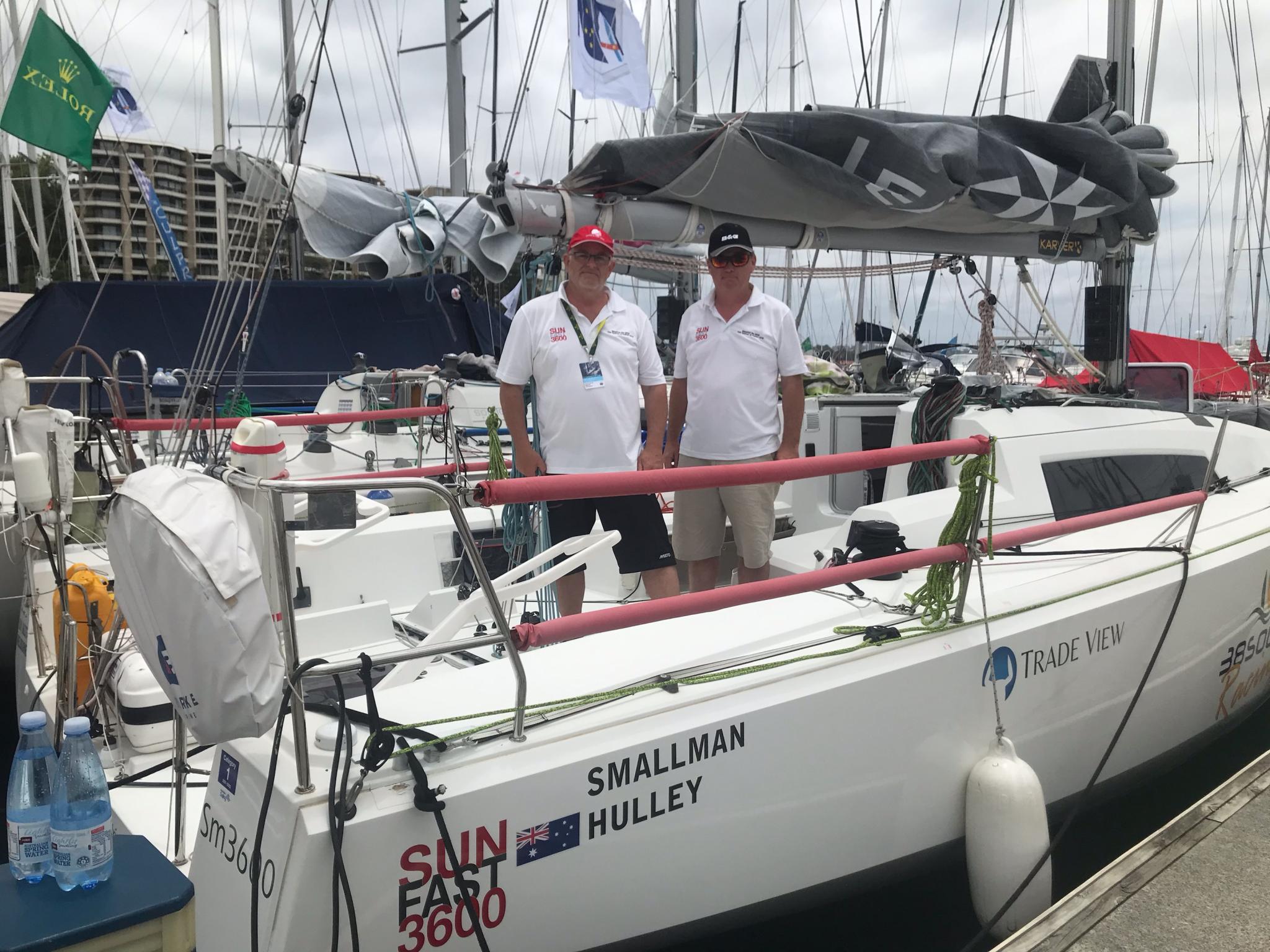 Competing in the Rolex Sydney Hobart Yacht Race is no small feat.

The maxi yachts in the fleet can have up to 24 crew members.

But imagine taking that right turn out of Sydney Harbour and heading south towards Bass Strait as one of only two sailors on board.

Thirty-six sailors on 18 yachts are set to compete in the inaugural Two-Handed Division on December 26. The entrants hail from Queensland, NSW, Victoria, South Australia and Tasmania.

I talked to several of these sailors who will, no doubt, face challenges that include fatigue, breakages and changing weather conditions, relying on their talent and experience — and ability to communicate.

Rod Smallman had always aspired to compete in the Melbourne to Osaka Double-Handed Yacht Race. But it wasn’t until he was diagnosed with Prolactinoma (a noncancerous tumour of the pituitary gland) that Smallman took the leap and entered the 2018 race with his son Tyson, sailing Maverick, a Jeanneau Sun Fast 3600.

“I thought ‘bugger it, I’m going to do it.’ So, we became two-handed ocean racers and I loved it,” Smallman told me from his home in Melbourne.

“I probably wouldn’t have done it [the Melbourne to Osaka race] if it wasn’t for [the tumour],” the 61-year-old said.

“It was daunting because we’d never done a 5000-nautical mile two-handed race before. I remember thinking ‘What the f*** am I doing here?’ I just wanted to slink away, pretend it never happened.”

But they persevered and finished third on IRC and eighth on line honours out of 16 finishers.

Smallman’s experience inspired him to enter the inaugural Two-Handed Division for this year’s Sydney Hobart Yacht Race on board Maverick (now owned by Anthony Hammond). His co-skipper is Leeton Hulley.

Smallman, who competed in his first Sydney Hobart in 2019, has sailed before with Hulley (50), who has seven Sydney Hobarts under his belt. The pair get along famously and have a similar approach to two-handed sailing, Smallman said.

“When [Hulley’s] on watch I know that his tactical decision making is similar to mine, so we’re not zig-zagging down the course with different opinions. That’s critical, because while you’re sleeping you don’t have any say on what goes on.”

Sleep is not something the pair will get much of, so they will be sure to put some ‘zeds’ in the bank when they can. They plan to start off with a three-hour-on, three-hour-off watch system, and then work around it, depending on the weather.

“If it’s a 10-knot glamour, you just get as much [rest] as you can because you know it’s not going to last.”

Light upwind conditions are ideal for the 36 footer, which is a popular boat for two-handed sailors in Europe (where two-handed sailing is highly regarded). Smallman describes the boat as a ‘big dinghy’, as the majority of the ropes can be adjusted by hand rather than on the winch. The spinnakers are either furling or socked. This is so Smallman and Hulley can optimise their time on deck, rather than spending precious time downstairs packing a kite.

“If it works for the lazy man, it’s good for two-handed.”

Smallman seems to have the art of two-handed sailing down pat. His essential items include a bean bag, for maximum comfort while sitting in the cockpit, jaffles (egg and bacon, and ‘meat in a can’) and a pressure cooker to prepare dim sims.

“The secret to two-handed sailing is dim sims and bean bags,” Smallman said.

Smallman and Hulley have worked hard to prepare for the race. Recently, they competed in a race run by the Ocean Racing Club of Victoria (ORCV), sailing in wind gusts up to 30 knots.

They also sailed Maverick to Sydney to compete in the 2020 Sydney Hobart. But the day they arrived the race was cancelled due to a NSW Covid-19 outbreak that led to a two-week lockdown in Tasmania. After a trip to the shops, Smallman and Hulley sailed back home to Victoria.

This year they’re ready to rock.

“I’m jumping out of my skin! There’s something about the harbour start that just gets your juices flowing.”

Smallman believes they could be in with a chance to get onto the podium in the handicap divisions. But their main goal? “To be lined up in the first edition of the two-handed Sydney Hobart – that’s your answer.”

Being further back in the Sydney Hobart fleet will be a new experience for two-handed entrant Peter Dowdney.

Dowdney has competed in 16 Sydney Hobarts. But that is not his only claim to fame. In the 1980s, Dowdney sailed with ocean racer (the late) Lou Abrahams. He was also a bowperson for a couple of America’s Cup campaigns headed by Syd Fischer AM OBE.

Dowdney is a Sydney Hobart tragic, a fact his family has come to accept.

“They’ve now embraced it and they don’t ask if I’m doing it, they ask me what I’m doing it on. It’s one of the things that has become a part of the DNA of the family,” Dowdney said from his home in Victoria.

Dowdney has an impressive Sydney Hobart resume’. He was the first person to cross the line in the 1988 race aboard Syd Fischer’s Ragamuffin.

This year Dowdney will not just be bowperson, on board the Elliott 1250 Tourer, Joker on Tourer. He will also be the tactician, trimmer, mastperson and co-skipper to the yacht’s owner Grant Chipperfield.

Dowdney and Chipperfield will use the Sydney Hobart as a practice run for the 2023 Melbourne to Osaka Race.

“We actually registered our interest in the previous Osaka race, but we weren’t really in a position to do it back then, Dowdney, 57, said. “Now we’re both four years older and approaching our 60s, it’s on the bucket list. We said ‘You know what — this is the time.’”

Dowdney has complete faith in his long-time friend Chipperfield, 56, an experienced offshore sailor.

“Having confidence in each other makes a big difference because you go down below, the bloke that’s up there – you’ve got to trust him 100 per cent with your life.

“He’s the guy that’s watching over you while you’re sleeping. It takes a bit of getting used to. That’s one of the reasons why it’s good to have someone with you who you’ve known for a long time, and you trust each other.”

It is important to minimise risk while two-handed sailing, which is why the pair have made some adjustments to the yacht to make safer for activities such as sail changes.

Some of the halyards originally could only be controlled at the mast, so they have diverted them back to the cockpit where they can be controlled by an electric winch.

“It’s just a subtle change to the way we sail the boat, but it’s a big change in terms of  mitigating risk when changing sails in bumpy conditions,” Dowdney, who is the Australasian Sales Manager for Ronstan, said.

The duo have had plenty of practice sailing together. They competed in the Melbourne to Devenport Yacht Race (195nm), ocean yacht race to Grassy, King Island (114 nm) and Apollo Bay Ocean Yacht Race (52nm). They have also gone out in tough conditions, ‘bashing around in 15 to 20 knots’, to practice reefing and shaking out the reefs.

Dowdney would love to win the Two-Handed Division on line honours, but is under no illusion that Joker on Tourer isn’t the lightest or fastest boat in the fleet. However, he isn’t ruling out getting some solid results in the handicap divisions.

Strong north-easterly winds are ideal sailing conditions for the boat.

“From our standpoint – we probably want some reasonably solid breeze at some point. That will sort us out and give us a chance to position towards the front of the two-handed fleet. Then it’s just going to be a matter of hanging on.

Tasmania’s Rob Gough and John Saul have a slight advantage over their fellow two-handed competitors.

Last year, the pair sailed from Sydney to Hobart to deliver their boat back home after the race was cancelled.

“We got the boat to the Cruising Yacht Club of Australia the week before the race got cancelled which was a bit of a disappointment. But we’re having another go this year,” Gough said.

Although this will be Gough’s second Sydney Hobart, he is a seasoned sailor. He is a successful windsurfer and Moth sailor. He won the Moth National Title in 2012 and won the Master’s category at the 2017 Moth Worlds.

Joining Gough is offshore sailor John Saul, 61. Saul skippered Computerland to the finish line of the tragic 1998 Sydney Hobart. Only 44 yachts completed the race that year.

The pair have done plenty of two-handed sailing together, including cruising around the Pacific.

The 40 foot Akilaria RC2, Sidewinder, was designed for this sort of sailing. Gough bought it from a sailor from the UK who abandoned an attempt to sail solo around the world. All Gough had to do was reduce its weight and simplify its set-up.

Gough and Saul have done a few overnight races on the yacht in the lead up to the race. And Gough even did 11 hours of solo sailing around Bruny Island, southeast of Tasmania, in April, in a “pretty hectic” westerly.

The humble goal for this year’s race is to make it to the finish line.

“It’s going to be awesome, we’re really looking forward to it. And it should be good coming up the Derwent, with just two people on board it will be pretty epic.

“We’ve just got to make sure we get across the Bass Strait, do all the right things, and don’t push ourselves too hard so we can be on the finish line.”