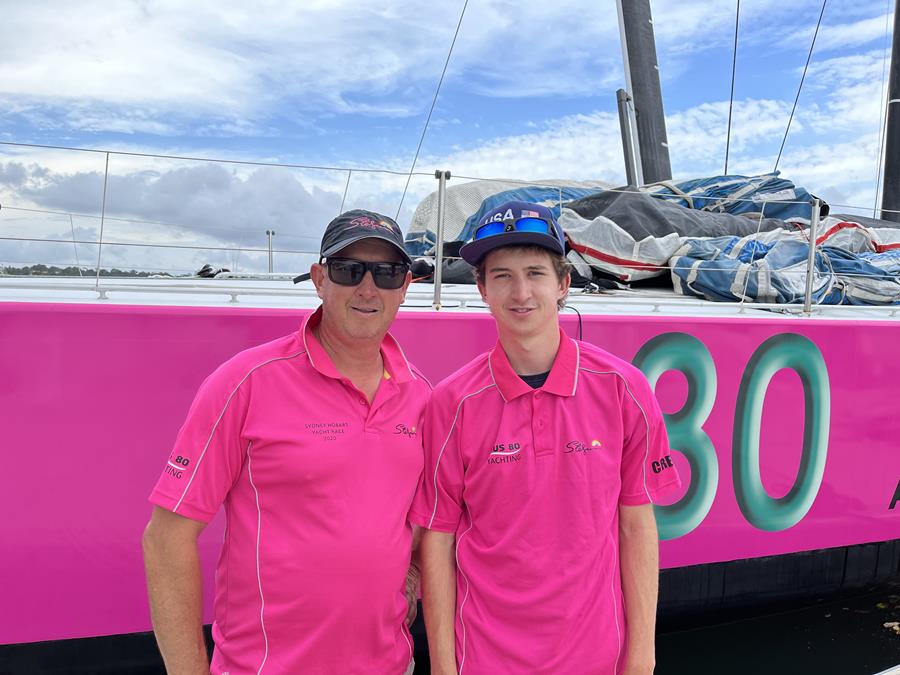 Zac Heyes’ first memory of the Sydney Hobart Yacht Race is of the Boxing Day start, trying to see his father Paul on television somewhere in the fleet.

This year, Heyes,18, will finally get to see his dad close up and live at the start, as a fellow crew member on the Botin 80 Stefan Racing.

Born on August 3, 2003, Zac is also the youngest person to crew in the 76th edition of Cruising Yacht Club of Australia’s 628 nautical mile race, and one of five 18-year-olds among the fleet of 93 boats.

“I remember as a young child how I’d see Dad go off and do the Sydney Hobart and then I’d watch the race on television,” he said.

“It’s so great to be a part of the race now. I’m super excited. I’m really looking forward to it.”

While Zac’s background in sailing began in skiffs, he has forged some handy experience for his age. Although this will be his Rolex Sydney Hobart debut, he has ocean racing experience.

He sailed in the 2019 Darwin Ambon race over 630 nautical miles on the Santa Cruz 72, Antipodes, with his father as helmsman. They won on IRC.

So, Zac is accustomed to some of what he will experience racing in the 2021 Sydney Hobart.

However, he is ready for the challenge of racing upwind, as he is likely to face in the Sydney Hobart; especially with southerlies and on-the-nose conditions forecast.

“I am ready,” says Zac, who recognises the iconic status of the race.

“This is a great race, the most well-known race in Australia.

“I just want to get on the boat and get going to the start.”

Zac and Paul Heyes are not the only father-son combination on Stefan Racing.

There are two other such pairings, with skipper Grant Wharington and his 25-year-old son Oli on board, and Doug Sallis with son Jarrod, also 25.

Paul, who is also a champion sports boat sailor, says the three sons have all earned their places in the crew rightfully.

“There are no free passengers on this boat,” he said.

“All three boys are doing a role and holding their spots. They are all very fit and agile.

“These boats are about manpower and the boys are a valuable part of that.”

Stefan Racing is owned by the three fathers and marine auctioneer, Adrian Seiffert, who will also be sailing in this year’s race.

Paul says Stefan Racing is ready, especially after the 400 nautical mile delivery run the crew took her on from the Gold Coast to Sydney.

“We’ve been working on it for the last three or four months full-time,” he said.

“The delivery run was great. We were getting up to 33 knots. It was great for the crew too.

“We are very well prepared.”

Sponsored by Stefan Ackerie, owner of a hairdressing salon chain well-known in the seventies, Stefan Racing is the former Beau Geste and has a strong Sydney Hobart pedigree.

An all-carbon canting yacht, it was sailed from America, where it had sailed as Cabron. It arrived in Australia in December 2020 with similar foils to a V70, and daggerboards.

While that set-up was to optimise the IRC rule, Wharington felt it slowed the boat down. Hence, the return to larger sails and water ballast.

“We want to go as fast as we can. Its real strength is in big breeze upwind and reaching. It’s a very powerful boat,” Wharington says.