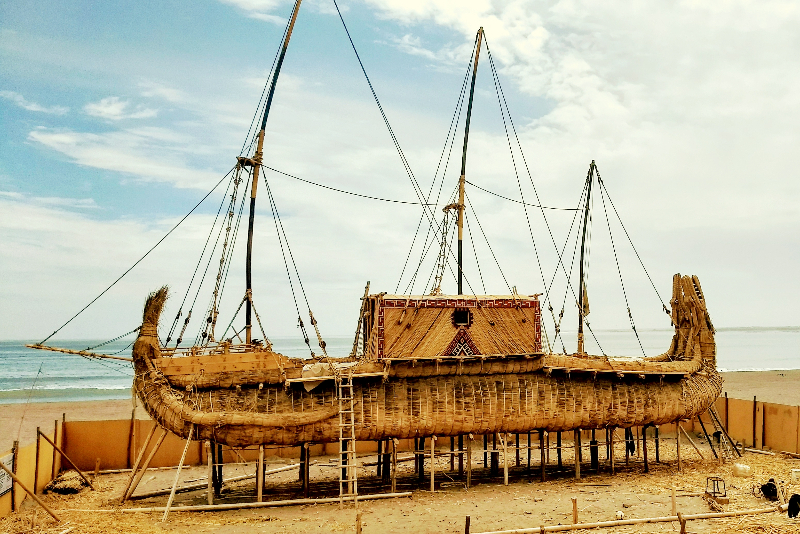 19/09/2017
Arica, Chile: on a lonely stretch of desert beach in the extreme north of Chile, a reed-raft is taking shape. It has no rudder, uses eucalyptus and bamboo for the masts and cabins, rope made from native agave plants, and its solid hull was constructed from tightly-bound Totora reeds, harvested by hand in Lake Titicaca.
Named the Viracocha III, it is Captain Phil Buck’s third such raft, and his second attempt to sail to Australia.
“Our first two rafts both made it to Easter Island. This time I have built the boat much stronger, and with increased sail area, hope to bypass Easter Island altogether and make our first landing at Mangareva in French Polynesia, which will already be almost halfway to Australia” says Massachusetts–born Buck, 53.
Other unique features include embedding eucalyptus tree trunks in the hull, using a longitudinal system of rope trusses,  and using taller masts and more sails than have been tried in previous attempts.
Trying to keep the boat true to its mission to prove the ancient South Americans could have made such long voyages, no metal, plastic, glass or other modern materials have been used for the raft's construction; all the bamboo was harvested locally by his crew, and driftwood was used to make the rope blocks and pulleys. Sisal rope made from agave is used, and wooden dowels replace nails. Sails are made of cotton, cotton being cultivated in South America for millennia.
Steering will be done by guara boards lashed to the side of the hull, en lieu of a keel, while a tiller will also give a measure of manoeuvrability. In any case, the wind and currents of the South Eastern Pacific should propel the boat to more or less directly to Mangareva with a minimum of tacking, and  “From there one is rarely more than a few day's sailing from the next island,” he says.
Critics compare the venture to Thor Heyerdahl's Kon-Tiki and Ra expeditions, predicting a submersive end to the voyage, but Buck is unfazed, pointing out the Kon-Tiki was made of wooden balsa logs, prone to shipworms, while the Ra reed rafts were made from different African reed species and papyrus, respectively.
In recent years DNA studies by Professor Erik Thorsby have suggested that there was contact between the Polynesians and Pre-Columbian peoples, and Mangareva itself was pinpointed as the likely point of contact, by Peruvian expert José Antonio del Busto, author of a book entitled “Tupac Yupanqui, discoverer of Oceania”.
There are other clues in Polynesia, like the sweet potato, Inca-style walls, linguistic and oral traditions that are strikingly similar. Buck wishes to add his voyage to the growing stock of evidence such voyages were made in antiquity.  As to a link with Australia, the evidence is more sketchy, though he notes Tasmanian Aborigines used reed canoes identical in shape to those used today in Peru.
Buck admits the hardest part of the voyage is getting the boat built and into the water undamaged. Partly financed by grant by the Bolivian government, harvesting the reeds began two years ago; the hull was damaged by rain while being built in a plaza in the Bolivian capital, and further damaged en route to Chinchorro Beach in Chile back in February. Now, with the vessel 90% completed, funds have dried up and he is relying on volunteers and donated materials to finish construction, while negotiating tough terms with sponsors.
He hopes to launch the boat using a system of ropes and pulleys manned by spectators, and expects the 10,000 nautical mile voyage to Sydney to take up to six months. It won't be easy, but Buck is no stranger to hardship: apart from the 2000 and 2003 voyages, he is an avid mountain climber, in his 20s and 30s he ascended the highest mountain in every country in the Americas, one of which had landmines on its slopes.
The Viracocha III will have a mixed, international crew of 12 and a pet dog. Launching is scheduled to take place in six weeks.
– Article and images by Glen David Short, an Australian volunteer working on the Viracocha III.