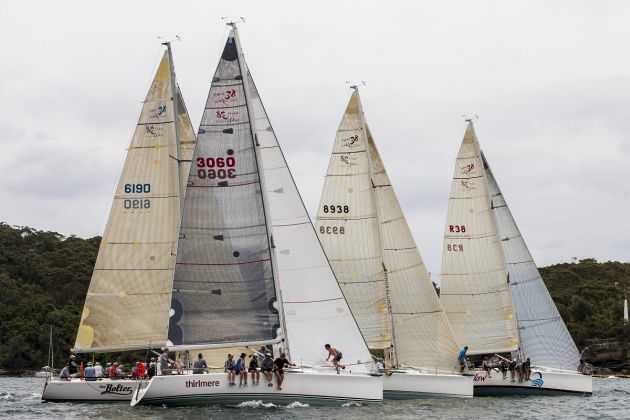 A dozen Sydney 38’s from Australia and overseas are making history today as they prepare for the first ever Sydney 38 OD International Championship at Middle Harbour Yacht Club as part of the 11th anniversary Sydney Harbour Regatta.

It was not without incident that the 12 will make the start line for the first of three planned windward/leeward races today, according to class stalwart and executive member of the Association, Peter Byford, co-owner/skipper of Conspiracy.

On one of the favourites, Kirwan Robb’s IKON38, a crew member was injured on the delivery trip from Melbourne, but they have overcome that problem ahead of the practice day yesterday.

“Nothing went right yesterday – and we broke gear. Hopefully it will be better today, it will be our practice day as we didn’t have the chance yesterday,” Malo said.

The lone American crew, on the other hand, is in fine fettle with their charter boat, Larki Missiris’ Wild One.

In the class for just over a year, skipper Stuart Jones is actually an Aussie from Cronulla, living in Philadelphia. His own Sydney 38 is based at the home of one design, Annapolis, Maryland.

“Six months after I bought the boat we did the Newport Bermuda Race with it. Surfing downwind at one stage, I got the boat to 18 knots. It was something else,” Jones said this morning.

During their learning curve, Jones was in touch with the Sydney 38 Australian Association who convinced him to return home for the Sydney 38 One Design International Championship. “They offered to arrange a charter and were very helpful and I thought ‘why not, we could learn a lot from this’. Larki has also been fabulous in helping us,” said Jones whose crew make up includes four from Philadelphia, two in Chicago and two in Maryland.

A second New Caledonian pair, Renaud Gerardin and Mana Malmezac, have left their ‘Guilty Pleasure’s’ at home and chartered well known Sydney boat, Calibre. They are ready to go and according to Peter Byford, are in good shape.

“Their only problem is a little barrier with language, as they have some Australian crew mingled with their French crew, but they’re cranked up and ready to go,” Byford said.

Of his own chances at the event, Byford admitted that acquiescing to his two sons in recent times has improved their chances.

Others entered included Bruce Taylor’s Chutzpah38, minus Taylor who could not make it. But as a committed Sydney 38 sailor, the Victorian sent his crew, headed by Jim Conway, and they should be in the money.

Racing starts from 12pm today, tomorrow and Sunday. Officials are hoping the weather help them put three races away each day on offshore windward/leeward courses.

According to the Bureau of Meteorology, the fleet can expect south-easterly winds of around 10 knots, increasing to 15 to 20 knots in the morning, and tending east to south-easterly in the late afternoon or early evening. A thunderstorm and rain showers are also on the cards.

Full results will be found at: www.shr.mhyc.com.au