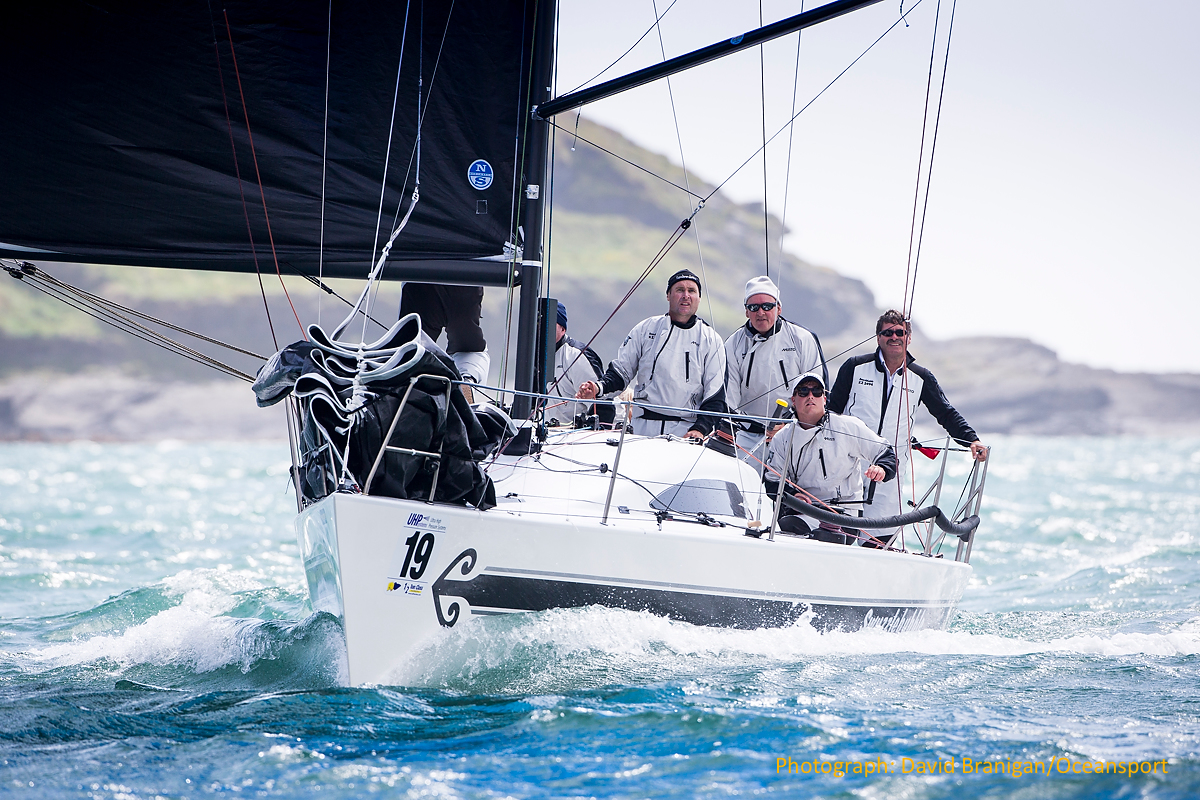 Swuzzlebubble at the Half Ton Classics Cup. Photo David Branigan/Oceansport.

With an enviable scoresheet of mostly first and second places for the series, Phil Plumtree’s Swuzzlebubble won the Euro Car Parks Half Ton Classics Cup at Kinsale, Ireland with just Friday’s eleventh race remaining.  A breezy penultimate day ended with a short coastal course in which the British boat placed fifth but was still good enough to confirm the overall win.

Plumtree’s ten race series saw him dominate the 21-strong fleet from the opening race on Monday in spite of an eighth place in race three.  However, four races on Tuesday left little room for doubt with all first and second places for the day while the event discard took care of the high score from the opening day.

Another first and second place on Thursday saw Swuzzlebubble start the coastal course with a commanding nine-point advantage.  However, the race around the scenic approaches to Kinsale and the finish off the historic Charles Fort carried a 1.5x multiplication factor and several wipe-outs in the heavy conditions at sea saw Plumtrees team place fifth.

Their nearest challengers were second placed David Cullen on Checkmate XV and Nigel Biggs on Checkmate XVIII but both had sixth and fifth places earlier in the day that effectively decided the regatta in Swuzzlebubble’s favour as the former Kiwi classic ended with a three point advantage and a worst race discard of second that allows Plumtree to sit out the Friday’s final due to an unexpected crew personal commitment.

The regatta now returns to what had been suspected all week given Swuzzlebubble’s pre-event favourite status after two previous titles: that the series is a battle for second place.

Cullen’s lead over his Checkmate’s former owner is just 1.5 points and while the Howth Yacht Club skipper equalled Plumtree’s win count for the series so far, a make or break final race could be all the opportunity Biggs needs to push his newly launched Checkmate XVIII ahead of his friend and take the first runner-up place.

As has been the case all week with one day lost to high-winds, the forecast for Friday morning is for near gales but with a possible weather window to allow for an earlier starting-time of 0955 for a one hour windward-leeward course.

Elsewhere in the fleet, Mike and Ritchie Evans’ The Big Picture is assured of fourth overall, ahead of class president Philipe Pilate on General Tapioca.  The third host country boat – all three hail from Howth – in the top six has a battle to keep the standing as Jonny Swan holds a slim 0.75 point lead over seventh placed Paul Pullen on Miss Whiplash.