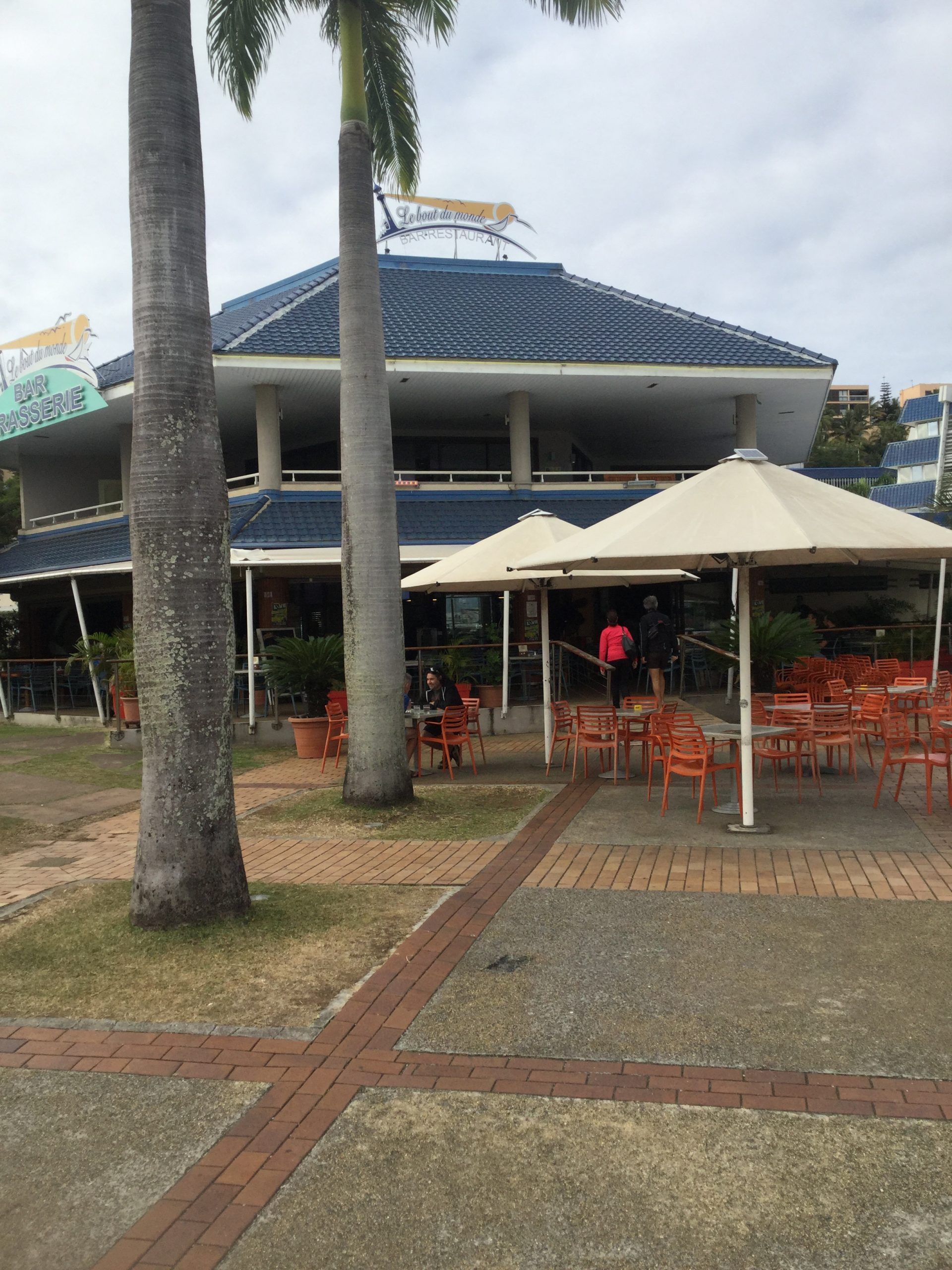 Plenty of reef.  The fringing reef well out with several well posted passages into the Lagoon.

Once inside the lagoon one cannot steer a course direct to Noumea, or one would come to a grinding halt.  “Crunch”. (Coral reef and Islets).

Never the less a small boat paradise inside the beautiful lagoon.  Places to anchor and overnight.

Noumea is a natural protected harbour with not one, nor two, but three marinas and plenty anchorages outside of them.  Lots and heaps of yachts.

Port Moselle Marina similar to Papeete Tahiti – is in the town.  Fast ferries come and go.

A floating jetty opposite the Marina office and the terribly important (I reckon) Brasserie.  Very friendly staff, nice.  But the negative is – you need a gold card to pay for the beer.  Anyway it is the visitors jetty and pens.

The British have all sorts of flags.  The French have the tricolour.  Meaning the same flag military, shipping and domestic.

Aside, French Polynesia and New Caledonia also have their own flags as our Australian States do.

A week back, on the visiting yachts dock, I noticed a black rubber sided Rib – hard bottom, big outboard.  Had the look of efficiency, dock near the gate-out on the jetty.

It was manned by military and police type.

They went to another dock.

Later an Australia owner (neighbour) of a large stock production catamaran (the fashion these days) said there had been a drug bust.

The yacht was being tracked on its way to Australia.

It ain't going to get there.

I mentioned, some weeks earlier, the customs officer in Tahiti, showed me – on his computer – what his real job was.

Tracking fishing boats all across the South Pacific.

Oodles and masses little white dots on the screen.

My guess, if they know who, what and where a certain yacht is.

One cannot hide that yacht, not even in the big wide Pacific Ocean.

Sneaking into little outlying islands like French Polynesia, Tonga or even Chesterfield Island, little over half way between North of New Caledonia and the Australian Great Barrier Reef.

Chesterfield is French.  (The Coral Sea is a bit of a French Lake).

It was 2,600 N Miles from Tahiti to New Caledonia via my way points.  All pumped into the B&G of course.

The last 1,000 miles was quiet.  I blame this (or I suspect) on the effect of the Islands to the north.  Tonga, Fiji, Vanuatu.

Previous years I'v noted the windy Indian Ocean trade winds from Australian owned Christmas Island and Cocos Islands to Mauritius – as one draws closer to Mauritius the effects of the Islands Rodriguez, Mauritius and Reunion, the wind and ocean could be quiet at times. Beginning 100s miles away.

It is winter.  Soon Spring.

Unlike Panama (in the doldrums).  That's par 1 yuk multiplied by humidity and thunder storms.

From Bundaberg – watching weather forecasts – I will sail South to Queensland's “Gold Coast” and “Sydney Town”  all on the long haul route (south about the Australian Continent). On my way home to Western Australia.

Blimey, doesn't feel like it.  I am only just starting.  Wouldn't want to kark it yet, otherwise one would never know what Donald Trump will say next.

Kindest regards to all