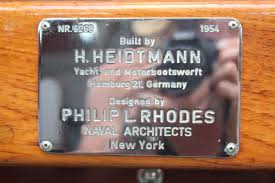 We receive some bizarre stories from our sources all around the world, but this one has us baffled. Why would anyone want to steal the boatbuilder's ID plate from a yacht? Haven Orrechio- Egresitz from the Cape Cod Times tells the story:

FALMOUTH — A 23-year-old South Yarmouth man accused of stealing nautical items from boats in Bourne and Barnstable, including from a museum, pleaded not guilty to a related charge Monday in Falmouth District Court.

Samuel Lawrence was issued a summons by Bourne police last month for one count of receiving stolen property over $250 after officers determined he stole a builder’s plate from a sailboat in Monument Beach, according to a police report filed in court.

Builder’s plates are metal plates on boats that provide information such as who built the boat, the date it was built and where it was built.

The plates are worth little on their own, but a sailboat loses significant value when the builder’s plate has been removed, according to Bourne Detective Sgt. Jonathan MacDougall. The owner of the Monument Beach sailboat told police his Herreshoff skiff was worth about $20,000 with the plate.

The owner met with Bourne police June 27 at Rivendell Marine in Monument Beach and said he remembered a man, later identified as Lawrence, showing “specific interest” in his boat during Memorial Day weekend, according to the report.

After noticing the plate was missing, the owner posted a request on Facebook that anyone with information about stolen merchant items, specifically boat builder’s plates, to contact him. A boatyard owner reached out and told him about an investigation into Lawrence by Barnstable police.

The next day, Bourne detectives went to Lawrence’s house and asked him about the plate and whether he had been at Rivendell Marine. At first, Lawrence said he had not been there in a year, but detectives told him he had been identified as having been there on the holiday weekend through a separate Barnstable investigation, according to the report.

At that point, Lawrence said he might know where the plate was, but it was not at his house.

Later in the day, Lawrence called police and told them he had the plate and they could pick it up. When detectives arrived, they believed the plate, which had the same stamp numbers as the stolen plate, was not the same one the owner had showed them a photo of, according to the report.

Lawrence said it was the same plate, but he had cleaned it up and restamped it for the owner, the report says.

Lawrence was released on his own recognizance after arraignment and is scheduled to return to the Falmouth court Sept. 25.

Lawrence pleaded not guilty last month in Barnstable District Court to charges that he stole various other sailing artifacts and builder’s plates from the Wianno Yacht Club, Osterville Historical Museum, where he had once been an intern, and boatyards in Barnstable.