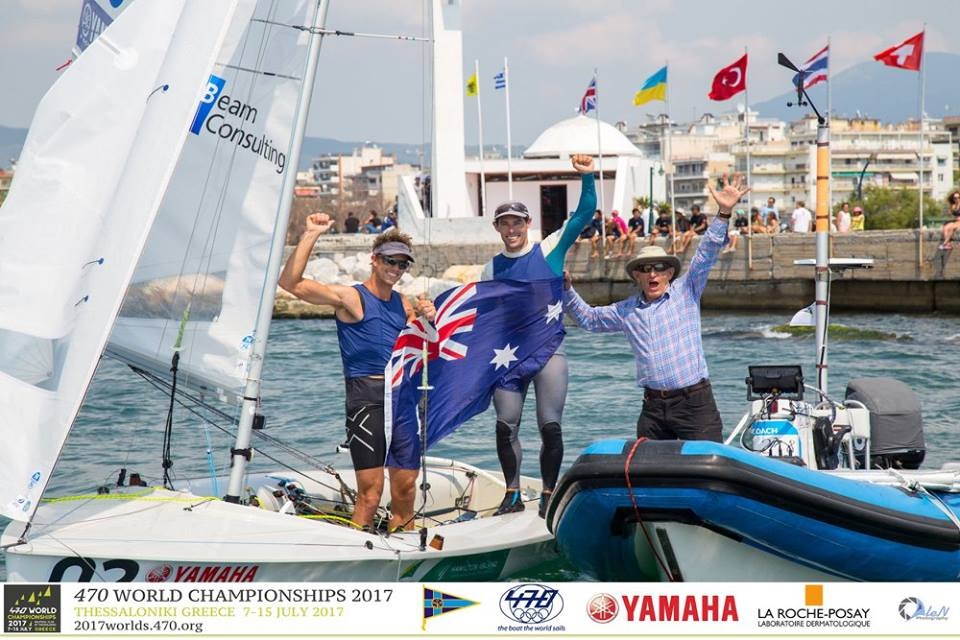 Australian Sailing’s Head Coach and 470 Coach since 1997 Victor Kovalenko has an unparalleled coaching record, his sailors have won ten Olympic medals and 19 world championships.  He is widely known as the Medal Maker and his string of coaching success continued recently when the 470 World Championship 2017 was won in Thessaloniki Greece, by Australia’s Mat Belcher and Will Ryan.

Belcher, as a 17-year-old Brisbane schoolboy, carried the Olympic flag into the arena at the closing ceremony of the Sydney 2000 Olympic Games.  He’d just won the 420 Worlds, the feeder class into the 470’s and a week later, Kovalenko arranged for the newly crowned Olympic 470 Gold medallist Mark Turnbull to take Belcher for his first ever sail on a 470.

Belcher, although World Ranked number one missed out on 470 Olympic selection for the 2008 Beijing Games where Australia again won both Men’s and Women’s Gold medals, as it had in Sydney, but took Olympic Gold in London 2012 with Malcolm Page.  He then started an intense campaign with Will Ryan, his training partner crew who had medalled in the 2008 29er Worlds and come thru the Australian Sailing Squad ranks. Belcher and Ryan sailed intensively in their 2016 Olympic campaign, which saw them win 18 regattas in a row and that 40-plus regatta campaign culminated with an Olympic Silver medal in Rio.

Victor Kovalenko reflected on the campaigns ‘Mat’s seventh and Will’s fourth World Championship win is a just reward for two very talented and dedicated sailors.  Both Mat and Will are outstanding sailors and I am lucky to work with them.

‘Now we are doing a new kind of campaign, carefully selecting events for both landmark and strategic importance and building on training time and experience in other classes in that it allows us to accommodate both Mat and Will’s other priorities.

‘For Mat its making sure he has more time at home, for family and business interests and with our Australian 470 training base on the Gold Coast, the knowledge transfer to the next generation of young Australian sailors.

‘We are combining this Tokyo Olympic campaign with Will’s professional sailing in many different classes at the same time.

‘This is very important for us to move forward because after 470, we all want Will to sail at the top level in other types of sailing, such as America’s Cup and more big boat racing, perhaps in the future even the Volvo Ocean Race.  He is currently in M32, match racing and keelboat racing.

‘Olympic champions and Olympic medallists bring some special elements to the sailing arena, their decision making, their knowledge, their professional approach to sailing.

‘Olympic Sailing is not just about learning to tack and gybe and how to go fast.  The most important thing they are learning is how to make good decisions fast, under pressure, to ensure they reach their goals.

‘Therefore, when talented young sailors say my aim is to sail at the Olympics that can be the start of very significant careers.  This is a skill they can take into other sailing areas, where incomes have many more digits and, into business and politics; all areas where these skills are invaluable.

‘And of course, not only can young Olympic sailors expand their sailing horizons, they can further their education while they are campaigning.

‘Both Mat and Will have completed their first degrees and are now working on their Masters degrees.

‘After the Championship Will Ryan presented to me his 2017 World Championship Gold medal and said, ‘Victor I want you to have this medal, without you there would be none, this medal belongs to you.’  I said No, no Will it is not.  This is your medal and you should keep it.  But he is much bigger than I am, he just forced me to take it.

‘Will is an amazing young gentleman and I was very touched by his action and I am very proud.

‘This is the 19th World Championship that my sailors have won, 38 athletes received Gold medals.  This World Championship medal presented to me by Will Ryan is the highest level of recognition for my skills as a coach and of my contribution to this success.’

Ryan, who has recently competed at the World Match Racing Tour event in St Petersburg, commented: ‘This new model is definitely working.

‘We have been able to spend some time away from this class and invest into other classes and come back to 470 which is pretty special and pretty unique and it is part of my motivation for doing the Games.

‘I have been sailing some M32, MC38s, Farr 40s, other big boat events overseas and each one brings their own experience.  You learn something new and you hope with some, you will be able to bring back and trial elements that you can bring back to 470.

‘The same thing that everyone does with whatever life experience that they have, whether it is business management or whatever.  You try and bring some of those skills back into your other domains and hope you can find a way for them to overlap.

‘That’s something that Victor does naturally.  He looks at other sports and brings a lot of the other elements back.  Hopefully, we can all contribute a bit more this time.

‘Putting our latest World title win in context, what is as important for us is the process that led to that win.  It is nice to show ourselves that we can perform in conditions that are not our strength… a lot of positives there for us.’

Belcher added, ‘We are really proud to come away with all those World Championship wins, we certainly could not have done this without Victor.  I think the overall number of wins reflects the time and dedication we have spent in the class.  We are just looking forward to now consolidating what we have done for this year and really try and establish what we need to do for Tokyo.

‘This win has put us in a good position for our campaign and it shows our approach has worked.  We are sailing well together and we are looking forward to using this as a platform to go forward.’

‘And yes, Will and I are looking to add some more 470 World Championships to our own and Victor’s list over the next few years.’