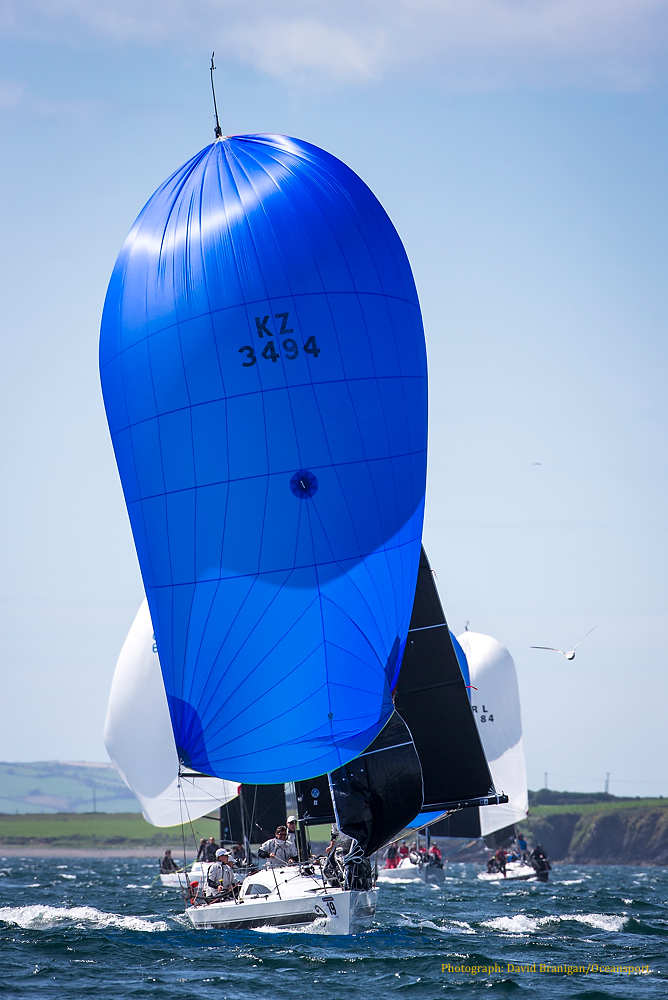 The event has been postponed until next year - David Branigan/Oceansport pic.

In a clear statement of intent for the remainder of the regatta, Phil Plumtree’s Swuzzlebubble found form on the second day of racing at the Half Ton Classics Cup at Kinsale with two wins and two second places during a long day afloat sailed in ideal conditions.

While there was a building breeze of 12 to 20 knots ending in champagne sailing conditions for day two, a near gale forecast for Wednesday morning may yet mean a lay day is on the cards and a break in the programme could be the best hope for a tight pack of runner-up contenders to break Plumtree’s dominance of the 21-boat fleet.

Two bullets for David Cullen on Checkmate XV edges him into second overall, five points behind Swuzzlebubble and just a single point ahead of Nigel Biggs on Checkmate XVIII, the previous overnight leader.  A consistent day for Mike and Ritchie Evans’ The Big Picture, Cullen’s clubmates from Howth, Co. Dublin keeps them in the hunt in fourth overall and just ten points off the leader.

On the water, Swuzzlebubble’s impressive upwind performance is hard to miss and although needing to finish by more than a minute and a half over her nearest rival to win on IRC handicap, Plumtree’s team is absent from the boat on boat tussle for places further astern.

Rollercoaster results across the two days afflicted several crews, notably Paul Pullen’s Miss Whiplash who lost his consistent form of thirds and fourth places from Monday and Paul Wayte’s Headhunter who used both the event discards to drop eleventh and twelfth places.

Class President Philippe Pilatte on General Tapioca also used both discards but also scored a third and fourth places to move up the leaderboard to fifth overall though a distant 19 points off first place.

Meanwhile the forecast of strong winds for Wednesday and possibly again later in the week led Principal Race Officer Anthony O’Leary to set four races for the day with three windward/leeward courses followed by a ‘round the cans’ race finishing inside Kinsale natural harbour overlooked by the historic Charles Fort.

The possibility of the gale blowing through by lunchtime on Wednesday has not been discounted and the intention to hold a coastal course remains – pending a decision by the race committee in the morning.  The longer race offers 1.5x multiplier and could prove critical in deciding the final outcome of the championship.