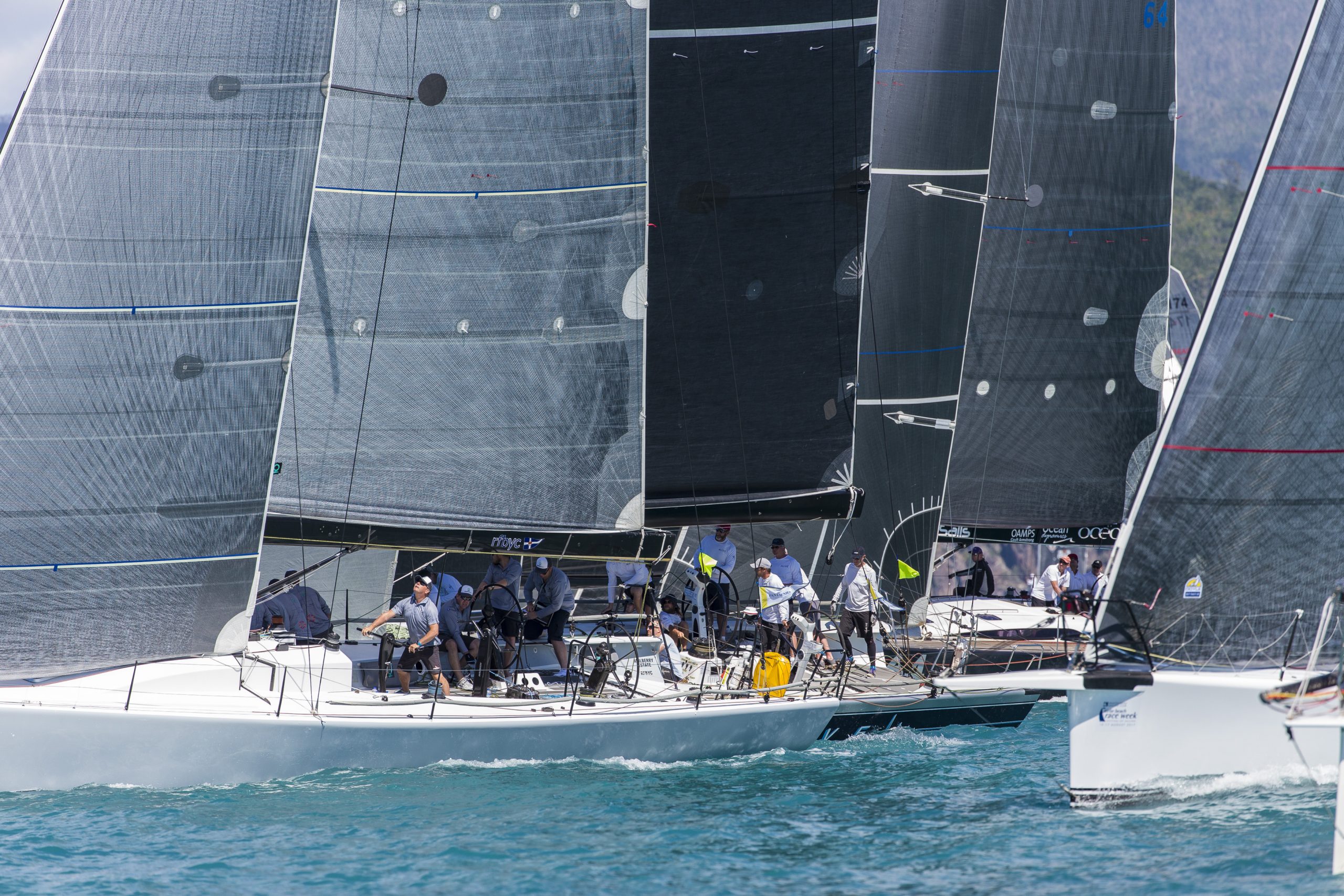 A wall of boats on the start line - Andrea Francolini

Airlie Beach Race Week Festival of Sails was a light weather regatta – race officials were even forced to abandon all attempts at racing yesterday – and for a short time it looked likely to happen again today, but just after 11am all that changed.

The weather gods smiled, answering competitors' prayers in the Whitsunday Sailing Club hosted event, a light zephyr of breeze filtering across Pioneer Bay in time to start a bay course.

It may have been light, it may have been shifty and even patchy, but it was an extremely pleasant way for the 102 boats and officials to end racing for the 29th running of the annual regatta.

The Goat/Team Hollywood (NSW) started in a winning position and finished there in IRC Passage. The experienced combination of Ray ‘Hollywood’ Roberts, Jamie Wilmot and Jeremy Whitty in the brains trust at the back of the boat was conducive to the cause. However, David Currie (Vic) and his Ponyo crew kept the Sydney 38 honest, finishing one point behind.

“We broke a halyard today, so were fortunate to win, because Ponyo pushed us the whole week,” Roberts said.

Receiving his trophy, the Sydney yachtsman said: “This is the best regatta in Australia – that’s why we keep coming back and will continue to do so.”

Local Terry Archer’s ‘flying’ G’Nome, a Grainger 075, stole the show in the Multihull Passage division, defeating David Davenport’s Montebello 12.5 Misty Sea, all the way from WA, by a lone point, while stalwart, John Williams was third with Tyee III (Vic), but tied on points with Misty Sea.

For Performance Divisions 1 and 2 and the Multihull Racing Division, a drop came into play after the three sailed five races. For all others, all races counted.

OK Dinghy supremo Mark Skelton, kept the momentum going from day one to take out Performance Division 1 by six points with his Beneteau 40.7 in a clash of the Beneteaus Mayfair, James Irvine’s Beneteau F40 (Qld), was second overall in their six race-one drop series.

“She is used as much as we can to excite and often scare,” Humphries maintained of their Conquistador. “We have a crew made up of marine industry ring-ins and hangers-on – a menace in the making.”

All other divisional results can be found by clicking on the link below.

Boss Hog Trophy, presented to the crew that best sums up the spirit of Race Week, displays sportsmanship and stands above the rest over the course of the regatta, on and off the water went to John Williams, the owner/skipper of the multihull, Tyee III.

“John did well – he finished third in the Multihull Passage. He’s supported the regatta for a long time and he epitomises all the regatta stands for,” Denis Thompson, Principal Race Officer said of the Victorian who has been a big supporter of sailing for over 50 years.

Williams was over the moon: “This is fantastic. Such an honour, especially looking at those who have won it before me,” the Victorian said.

Attending the prize giving was the Honourable Jason Costigan MP Member for Whitsunday, who presented some of the prizes. He has paid a special interest to Airlie Beach Race Week Festival of Sails in the past two years and was a joy to host on board our media boat.

Well, that’s a wrap and we look forward to seeing you at the 29th Airlie Beach Race Week Festival of Sails.