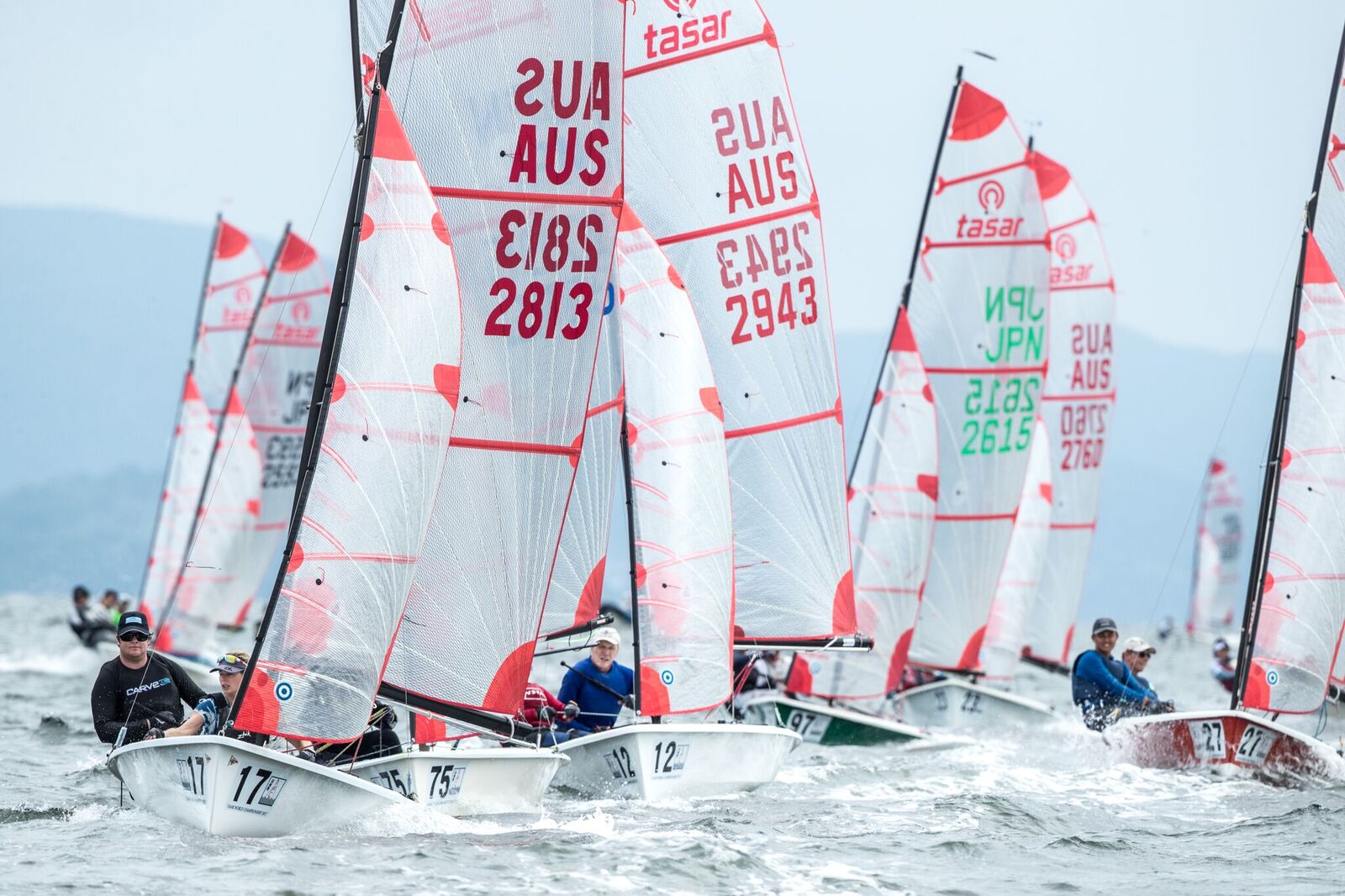 What a week it was for sailors at their recent 21st Tasar World Championship, held in Gamagori, 3 hours south of Tokyo Japan.

More often than not, there was a call by the helm for `more vang, more cunningham, more jib tension!!’ as the 97-boat fleet reacted to freshening winds and heightening waves making for exhilarating upwind planing and fast screaming reaches. In amongst it all was the occasional `man overboard’ and capsize, as well as broken halyards, rudder boxes, and even a snapped boom.

As Libby said after the 1st Race Day of 3 races and 5 hours on the water, it was one of their toughest days she’d ever experienced in a Tasar Regatta. The long lengths of each leg, the intensity of the breezes, the duration of each race (leaders finishing in 60 mins); set the norm for the first three days of nine races, testing not only sailing abilities but endurance.

Together with exhaustion, swollen hands, and impressive hiking bruises, came big smiles and endless stories, all discussed over festive Japanese food platters and beverages during each day’s Post Race Presentation and Happy Hour.

With the gradient winds dissipating later in the week, Day 4 with Races 10 and 11, was sailed in softer breezes, enhancing opportunities for the `lighter’ Japanese crews to excel. Finishing 5th overall, with 2 `heat wins’ were Hiroshi Takahashi and Hiroyuki Sugiura. Japan’s `Sailfast’ team Hiroaki Sato and Yasuaki Muragishi also achieved many top 10 heat wins to finish 10th.

With just Heat 12 to be raced on Day 5, and leaders Jonathan and Libby clearly securing their 1st place on the podium, there was a mere 2 pts separating 2nd and 3rd, and 14 pts separating 4th to 9th.

Consequently, chances were high for positions to change in this leading group comprised of 2 American and 5 Australian boat teams plus Japan’s `Hiro crew’ above. It was not to happen however, as the race was abandoned due to insufficient breeze and subsequently the Series was concluded based on overall results from Day 4.

Traditionally Tasars have honoured their `older sailors’ with perpetual trophies for combined age categories for over 80-Masters, over 100-Grand Masters and over 120-Super Grand Masters. This year was no exception! In fact the competition was so high that to win the Masters or Grandmasters trophies you had to finish in the top three overall. Awards went to:

In addition, the Event attracted many past Olympic, World and National Title holders in other Classes, a list suggestive of the popularity Tasars are experiencing around the World.

A brilliantly hosted Regatta, from offshore race officiating and media footage, to fantastic traditional Japanese food, refreshments and entertainment. How lucky it was that Typhoon Noru held off on the coast of southern Japan, only to strike Gamagori with heavy rain and gale force winds the morning after Presentation. `