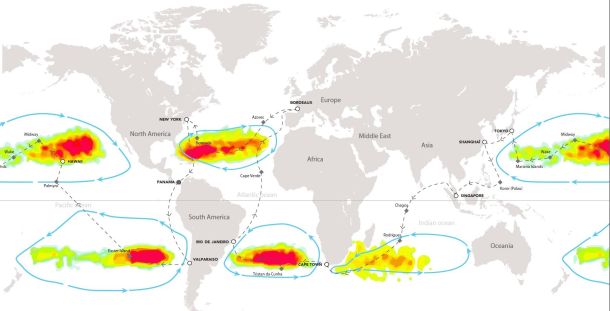 Plastic gyres in the world's oceans.

A Swiss-led, state-of-the-art trimaran yacht will set sail on March 15 as part of a research expedition to study the impact of plastic pollution on the global marine environment. It will focus on five trash ‘vortexes’ located in three oceans.

The “Race for Water Odyssey” expedition (R4WO), skippered by Swiss sailor Stève Ravussin, former winner of the Route du Rhum, will commence its 300-day ocean voyage in Bordeaux and cross the Atlantic, Pacific and Indian oceans. The aim is to study plastic pollution at five key areas, known as “gyres” or “vortexes”, where waste accumulates in large quantities, and in particular the impact of pollution for island populations living near these zones.

It is estimated that the surfaces of the worlds’ oceans are laden with nearly 269,000 tonnes of plastic pollution from 5.25 trillion particles, but much more lies below.

“The oceans have become the biggest rubbish bins in the world. Eighty per cent of all ocean pollution is plastic,” declared Marco Simeoni, chairman of the Race for Water Foundation, the initiator of the expedition.

Although several individual studies have already been conducted on certain vortexes, such as that of the 5-Gyres Organisation published last year, this will be the first time an expedition will collect and analyse systematic and comparable data on all five of the planet’s gyres in one go.

“There are about a dozen other organisations working in this area but very few are active; most are involved in awareness raising,” said Simeoni.

The six-member expedition crew will focus in particular on 15 island beaches located in the five vortexes and follow standardised techniques for collecting samples of microplastics. These will be sent back to a scientific team at Lausanne’s Federal Institute of Technology (EPFL) for analysis.

“We are starting to understand the overall problem much better but we still are not familiar with the general dynamics and how this pollution evolves over time,” said EPFL scientist Florian Faure, who has studied microplastic pollution in Swiss lakes and rivers. “It's interesting to focus on the islands to have fixed points to collect the rubbish. This research can be repeated over time and continued by people locally.”

Researchers from Duke University and Oregon State University will also help coordinate a digital mapping project of the plastic rubbish together with Swiss drone specialists SenseFly, an EPFL spin-off company.

During their voyage the crew will stop off in New York, Rio de Janeiro, Tokyo, Shanghai and other cities to raise awareness about the problem. The team also plans to meet with island residents, sailors, fishermen, local authorities and NGOs to gather information about their solutions for mitigating plastic pollution on their coastlines as a future follow-up.