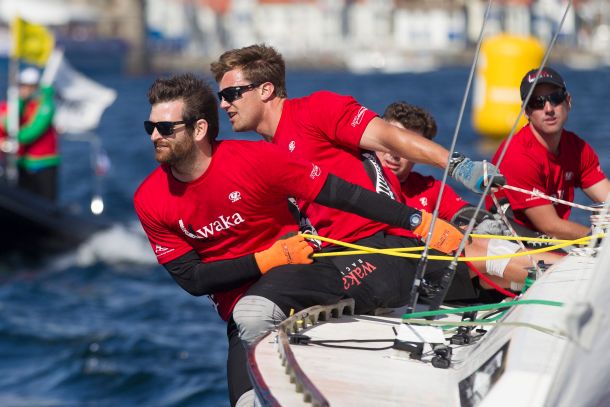 With 20 of the 24 flights of Qualifying now complete after day three of Stena Match Cup Sweden, the vital question is over who will make it through to the top eight and continue into Friday’s Quarter Finals here in Marstrand.

Currently leading the field, both on 10 points, are Ian Williams’ GAC Pindar and Francesco Bruni’s Luna Rossa teams. Already holding a three point margin over Team Alpari FX in third place, the British and Italian teams are definitely through.

The bottom four, including the 'match racing legends' American Ed Baird and local hero Magnus Holmberg, plus other Swedes Victor Ogeman and Johnie Berntsson, look set to be eliminated when Qualifying at this, the second event in the 2014 Alpari World Match Racing Tour, concludes tomorrow.

Racing on the fjord south of Marstrand island was held in a light westerly breeze and yet more blistering sunshine, bringing spectators and corporate guests out in droves.
Star performer today was Bruni whose victims today included other Tour card holders Phil Robertson, Taylor Canfield and Mathieu Richard.

“It was harder today, in that a couple of times we were behind and we passed,” Bruni commented. This included defending Alpari World Match Racing Tour champion Taylor Canfield, who the Italian team passed after they managed to split from them on the second beat. As to why they are doing so well here, Bruni says he feels comfortable sailing the DS37. “I am really happy with how things are going. I always feel fast around the course. When we are ahead we extend and when we are behind we catch up. That makes you race much more relaxed and you just make less mistakes.”

Hansen, the defending champion at Stena Match Cup Sweden, remains the top placed of the four Swedish teams competing and now the only one still capable of making the Quarter Finals.

“We had four really exciting races today but unfortunately we lost three of them,” admitted Hansen. “But the four were more or less the top of the tree, so it was no shame to lose to them. We are now in a position where we must win the rest of our races, so that is tough.” Hansen faces Gilmour, Richard and Bruni tomorrow.

Australian David Gilmour, a new Tour Card holder for 2014, has a tough road ahead of him, for at present he is in ninth place, with heavyweight bouts against Bruni, Canfield and Hansen still to sail: “The starts are definitely not one of our strengths at the moment and we aren’t getting around the course that fast. And I am not 100% sure what is going wrong, so it is quite frustrating at the moment.”

This is Gilmour’s first time racing in Marstrand where he is living in the shadow of his father Peter, the ‘grand master’ of this event, who won it no less than seven times over its 20 year history. “I haven’t spoken to him about any of the boat handling side of things or the racing. I probably should,” Gilmour Jnr admitted.

An exciting prospect currently lying in fourth place and likely to make it through to the Quarter Finals is the youngest competitor at Stena Match Cup Sweden, Joachim Aschenbrenner. He today won three more races, losing one to Francesco Bruni. His most exciting was against Swede Johnie Berntsson, when penalties were awarded to both boats in a tense pre-start. During the race there were two lead changes with Aschenbrenner finally managing to rid himself of his penalty and get in front just before the finish.

Considering that the Danish skipper is just 20 years old, he is clearly a talent for the future and a Tour Card holder in waiting.

Having had a better day today, but whose prospect for Stena Match Cup Sweden now seems over was American three time Match Racing World Champion, Ed Baird. After having a poor opening two days, Baird and his all-star crew won their matches against Nicolai Sehested and Johnie Berntsson today.

The final four flights are due to get underway  tomorrow. The weather is set to add a fresh complex to the event with stronger winds forecast.