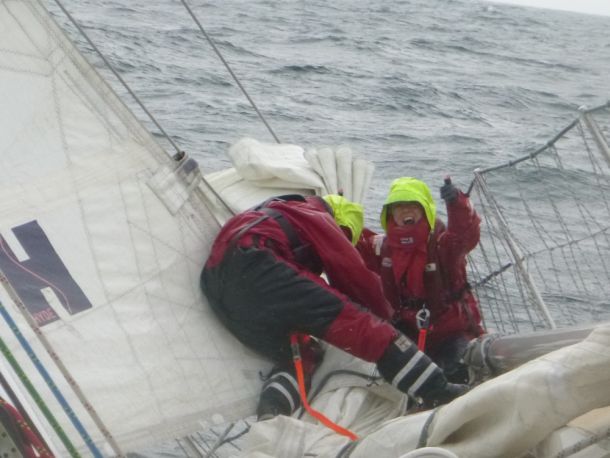 The Clipper 2013-14 Round the World Yacht Race fleet is closing in on Den Helder in the Netherlands with the first yachts expected to arrive at the dock around 08:00 (local time, UTC/GMT +2) on Friday 4 July.

Henri Lloyd is still leading the fleet, which is currently running in winds of 20 knots off the north east of England with the direction expected to back round to the south west this afternoon.

The winner of the OneDLL Cup, from Derry-Londonderry to Den Helder, could have a deciding outcome on the overall Clipper Race standings. If current overall race leaders Henri Lloyd maintain a lead in excess of twelve points, it will have a potentially unbeatable advantage in the Clipper 2013-14 Race.

Vicky Ellis, skipper of Switzerland, currently in third, said the conditions in the North Sea were unmistakable, with boat speeds increasing to 10 knots.

“It is shallow and quite tidal so has a horrible short, steep chop to it. We have been doing a few headsail changes to reduce canvas for the strong winds that sprang up yesterday afternoon and last night as the low pressure system front moved over us.

“We are currently running in a pack of seven boats, which are all within six miles of each other. With only 220 miles to go as I type, the podium spots could be anybody's. Skipper Eric Holden and his crew have a good lead at the moment but what the rest of the fleet don't know is that one of those podium spots is ours.”

Jan Ridd, skipper of Team Garmin, currently in seventh, added the fleet had endured some pretty nasty conditions in the last 24 hours since it rounded the top of Scotland. He said his crew had to work very hard changing up and down through the headsails as the wind built and subsided.

“The highest gust we saw on our Garmin instruments was just over 48 knots which when trying to sail into it makes for a very uncomfortable life both above and below decks. Also we had to navigate around the numerous offshore oil and gas platforms in the North Sea as well as avoiding the support craft and tankers that move between them and the shore. It has been a busy and stressful time for everyone.”

It is the second time the Clipper Race will have visited the Dutch port of Den Helder after racing in during the previous edition of the race.

You can view the overall leaderboard here.