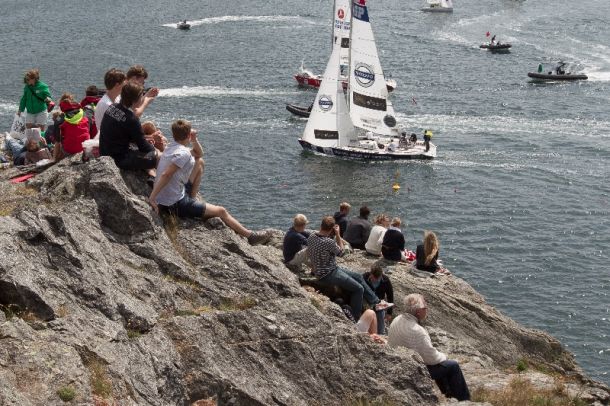 Marstrand, Sweden (4th July 2014): Stena Match Cup Sweden was two flights into its semi-finals stage at the close of play on the penultimate day of racing and in both matches it remains tied on 1-1.

The top four going through to the semi-finals were decided earlier today with Italian Francesco Bruni’s Luna Rossa the sole team to win their quarter finals in straight sets, in their case against David Gilmour.

“Every start we were on the right and ahead, apart from the second one where we won the pin, because it was massively biased,” said Bruni. “The guys are on fire. They are driving the boat fast. It is running very smoothly on board. You don’t have to push in situations if you feel that you are fast. It is never easy – it is very shifty, so you are never perfect. It is about limiting the big mistakes.”

GAC Pindar skipper Ian Williams, leader at the conclusion of qualifying yesterday, chose Joachim Aschenbrenner to race in the quarter finals. This was a bold call as the 20 year old Dane’s team was the only one to beat Williams during Qualifying. This remained questionable when Aschenbrenner, claimed the first Quarter Final match against the British four time ISAF World Champion. However the GAC Pindar crew fought back to win the next three.

The match between local hero Bjorn Hansen and Team Alpari FX skipper Keith Swinton, went 3-1 in the Swede’s favour while the one between Mathieu Richard’s Lunajets crew and Taylor Canfield USone went the full distance with Canfield eventually prevailing.

In one pre-start Canfield managed to drive the bow of his boat into the stern quarter of Richards’ boat. “There was no damage done,” explained Canfield. “He already had a penalty in the pre-start so it was a pretty stupid high risk move for me to make. But not doing it we would have been off the line behind and in the conditions we had this morning it would have been tough to catch up. So I made the decision, went for it…and failed.”

For the semi-finals, Williams defied expectations and chose Francesco Bruni as his opponent. Given that GAC Pindar and Luna Rossa were the stand-out crews from Qualifying, finishing tied on points, four ahead of their opposition, this seemed like another punchy call from the British skipper.

Two flights into the semi-finals, held in a light southerly breeze, blowing across the fjord and extremely shifty as a result, Williams claimed the first race and felt that he should have won the second had it not been for an umpire call he deemed questionable.

Williams came ashore fuming: “He [Bruni] dialled us into the top, we dipped and came up and he went quite wide and tacked onto port. So we tacked on to starboard and had to avoid him and then we got a red flag penalty for that. Even with the penalty, we went from being in control on the right, to being not in control, because he rolled us. So how that ended up as a red flag penalty… I think they were watching a different set of circumstances to me.” However the umpires did see it a different way maintaining that Williams hadn’t completed his tack on to starboard.

In that race they had started behind thanks to a riding turn on their jib sheet, but had managed to catch up with the Italians. “We’d done a good job, so it was doubly frustrating to be penalised like that.” Aside from the umpire call, Williams felt they were sailing well.

Similarly the Taylor Canfield versus Bjorn Hansen semi-final bout ended on 1-1 at the close of play.

“We had a really good last race with him where we were leading, got past and were able to get back around him and give him a penalty,” said Canfield, the defending Alpari World Match Racing Tour champion. “I think together as a team we were going really well and we just need to refine those little mistakes we’ve been making throughout the week. But no big changes – we are pretty happy with the team and how we were going.”

Meanwhile Bjorn Hansen’s crew seemed to have breathed a big sigh of relief having made the quarter finals and then the semis and were looking ever stronger and more confident on the water. Hansen’s responsibility has increased but being the sole Swede left in the competition. His supporters have laid out a giant banner on the rocks (now known as ‘Hansen Hill’) on the opposite shore to Marstrand saying ‘Go Bjorn’.

“We had a BBQ with the guys up there yesterday. They help a lot and it is great to have their support and all the other guys on this side. There is nowhere in the world like this for sailing,” said Hansen.

And he is right – there were some dramatic moments today causing gasps from the crowd of spectators and corporate guests, which would applaud whenever a match concluded or something worthy occurred, in a Wimbledon centre court-like way. As Hansen put it: “It is an honour to be Swedish in this race for sure.”

Racing concludes tomorrow with the final rounds of the semi-finals followed by the finals.