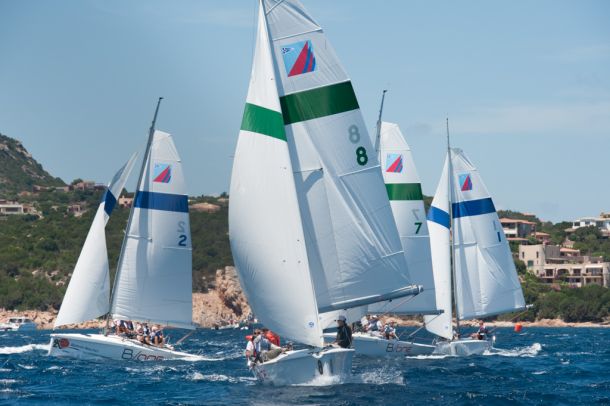 Porto Cervo, 5th July 2014. At the conclusion of two round robins, with almost 60 races held in the team racing event organized by the Yacht Club Costa Smeralda, victory in the Invitational Team Racing Challenge went to Italy's C.C. Aniene skippered by Cristiana Monina and Luca Tubaro. The Yacht Club Costa Smeralda team, skippered by Filippo Maria Molinari, took second place in the inaugural edition of the regatta ahead of Team Atalanti/Yacht Club Greece, skippered by Stratis Andreadis and Iason Spanomanolis.

Today's third and final race day dawned bright and blustery with a brisk Mistral blowing away the light and humid conditions that had characterized the previous days and allowing the Race Committee to hold all of the remaining 24 races scheduled in order to complete the second round robin. The mistral wind which varied from 15 to 20 knots and gusted up to 22 made for fast and furious racing off the coast of north-eastern Sardinia and a thrilling end to the event.

During the prize giving ceremony held on the Piazza Azzurra overlooking Porto Cervo Marina, Riccardo Bonadeo, YCCS Commodore, expressed his satisfaction at the week's proceedings: “This has been a truly wonderful inaugural event: fantastic teams, varied conditions, really thrilling racing and a real feeling among all of the participants despite the epic battles on the race course. My thanks go to the Race Committee, the Umpires and the International Jury who did a fantastic job, to Bavaria for the boats, and of course to all of the teams who travelled from near and far to make this event a success. I look forward to seeing you all here next year.”

The Final Results , the photos and full event details are available on www.yccs.com.