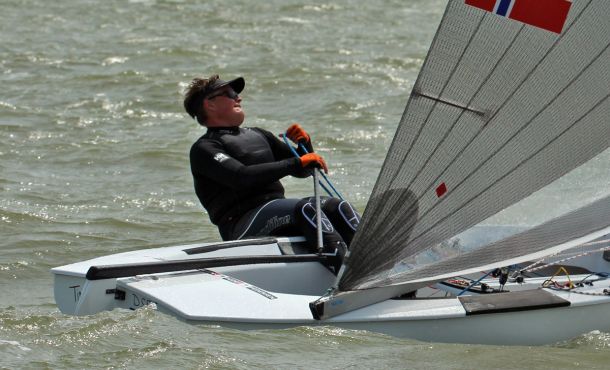 Anders Pedersen (NOR) had a nearly perfect start to the 2014 Finn Silver Cup (the Junior World Championship) in Hoorn, Netherlands on Sunday. He leads overall after a win and second place from the 2011 champion Arkadiy Kistanov (RUS) and Nenad Bugarin (CRO). The second race was won by Mikolaj Lahn (POL).

The forecast was for strong winds for most of the day. After launching in 18 to 20 knots the 32 young Finn sailors found a steep, short chop on the race course, but during the day a few rain clouds passed down the course and the wind decreased by the hour to 8-10 knots by the end of race 2.

For the first race the race officer set Course 2, with an upwind downwind loop followed by two long reaches to the finish. After one general recall, the fleet got away cleanly with Arkadiy Kistanov (RUS) getting the best of the first upwind to round ahead of Anders Pedersen (NOR) and local favourite Tobias Kirschbaum (NED). Kistanov and Pedersen sailed away into a comfortable lead and the Russian extended on the second upwind. However on the reaches he perhaps sailed too low early on and allowed Pedersen to close the gap and they rounded the wing mark side by side. Pedersen clearly enjoyed the second race as made his move to sail over Kistanov and then extended to win. Kistanov crossed in second. The battle for third was finally won by Jakub Marciniak (POL)

Race 2 was started very promptly in slightly less wind, with Course 1, a double windward-leeward loop. Marciniak continued his good form and was the early leader rounding ahead from Pedersen. They separated at the gate which allowed Pedersen to be further inside the Pole as a major shift changed the landscape on the second upwind. Marciniak tacked back early to get to the left and he dropped through the fleet, eventually finishing 12th. Pedersen hung onto the middle and stayed in second, but the lead went to Mikolaj Lahn (POL), while lots of others made big gains out of the left. Pedersen almost caught Lahn on the final downwind as the breeze faded to 8-10 knots. However it was Lahn who just crossed ahead with Fabian Pic (FRA) gaining 12 or more places on the second upwind to cross in third.

Pedersen explained his day, “Today the strategy was just to find a good angle, get the shift, go for it and keep in the pressure. In the first race I was in second all the race behind RUS 6 and managed to get past him on the last reach.”

“In the second race, I was second at the gate. The lead was shifting a bit, but I managed to keep in second. I was in the middle trying to save the lead, and I was struggling to get back to the left because I had a good angle and no pressure, but finally the wind came back a little and I managed to round in second. The wind just dropped and went left, so the guys who banged the corner gained a lot.”

“The conditions were quite rough. The waves were really big and tight, so it was really hard to get the boat going. And downwind it's rough pumping. But I am happy so far. Couldn't be better.”

Kistanov gained the most from the shift in the second race. “It was a nice day, with good conditions. The first race was good but I went a bit wrong on the second downwind where I went a bit more down than was needed so I lost my first position just before the finish.”

“In the second race I started badly but I had a really good second upwind. It was easy to understand. I saw before the downwind mark that there was more waves on the left, with a good shift up to the mark. I think I gained about 15 places. It was nice.”

On the venue, “I really like Hoorn. For me it's the best place for sailing. It's very physical with a lot of shifts and I really like that.”

While a front is passing through Sunday tonight, Monday is forecast to be a much calmer and dryer day with 6-10 knots of wind. Two more races are scheduled from 12.00. The Finn Silver Cup consists of a series of 11 races up until Friday 11 July.