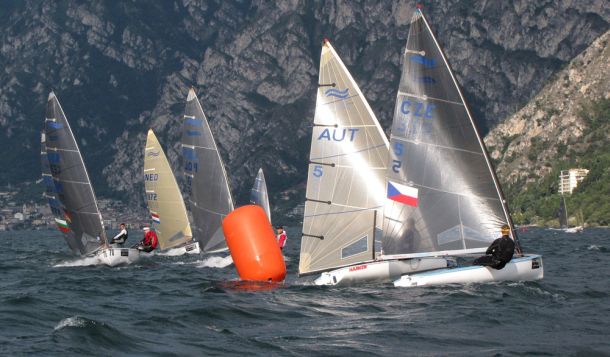 The 16th Junior Finn World Championship – for the Jorge Bruder Silver Cup – opens in Hoorn, The Netherlands this weekend. To date there are 35 registered sailors from 17 nations and four continents entered, including two former champions and a large group of newcomers sailing their first Finn Silver Cup.

The host club WSV Hoorn is located on the Markermeer, an area of water separated from the IJsselmeer by the Houtribdijk, a dam built across the former Zuiderzee. The Markermeer is shallower than the IJsselmeer and it was originally intended to be transformed into a polder, but work was stopped in the 1970s due to financial concerns and it soon became an important ecological and recreational inland lake. Hoorn is situated on the southern side of the peninsula from Medemblik. One of Hoorn's most famous sons was Willem Schouten, who in 1616, discovered Drake Passage between South America and Antarctica and named the southernmost tip of South America, Cape Horn, after his home town.

The Finn Silver Cup may not be the Cape Horn of sailing, but it is still a significant challenge and the list of winners below illustrates its important role in the class since 1999, with two sailors going on to win the Finn World Championship and numerous others later representing their countries at the Olympic Games. Only two sailors have won the title twice, Chris Brittle (GBR) and Jorge Zarif (BRA), the current champion.

The Finn Junior World Championship began in 1999 in response to the growing number of younger sailors in the class demanding their own championship. For many years it was just part of the Finn Gold Cup. Then in 2004 it became the Finn Silver Cup; it was held that year as part of the Finn Gold Cup in Rio, and the Brazilian Olympic Association donated the 'Jorg Bruder Silver Cup' to the class in memory of the Brazilian sailor who had died in an airplane crash in 1973. Since then the event has taken on new stature and has attracted up to 50 entries in the following years.

In 2007, the event started to be held as an independent championship, separate from the Finn Gold Cup. That year it was held in Moscow with 51 sailors, and, apart from on a few occasions, has been held separately from the Finn Gold Cup ever since. Last year's winner Zarif decided not to defend this year, but there are two former champions present. Arkadiy Kistanov (RUS) won in 2011, the second time it was held in Moscow, while Martin Robitaille (CAN) took the title two years ago in Maubuisson, France.

This could be the most hard fought for Silver Cup so far with a large group of favourites hoping to win the cup in their last year as a junior. Peter McCoy (GBR) finished fourth last year, but then won the 2013 Junior European Championship a few weeks later. Anders Pedersen (NOR) is Norway's top Finn sailor and picked up the bronze in last year's Junior Europeans. Philip Kasueske (GER) is one of the ever improving German team and won the Delta Lloyd Regatta a few weeks back in Medemblik.

If recent form is any judge, at the European Championship in La Rochelle earlier this year, Pedersen, McCoy and Kasueske finished one after the other in the overall standings, while Jakub Marcinak (RUS) and Kistanov were also in the top 50 overall. Other names to watch could include Dimitar Vangelov (BUL), Ondrej Teply (CZE), Fabian Pic (FRA) and  Lars Johan Brodtkorb (NOR).

Tobias Kirschbaum (NED), from the host club, has trained a lot and improved since his 14th place last year, and has local knowledge on his side. Also, Robitaille has turned up with two other young Canadians with whom he has been training with. There is a lot of untested talent taking part so it will be quite interesting to see who rises to the top.

As part of their preparations, 10 sailors took part in a clinic organised by the Finn class over the past four days to ensure all the young sailors have the best chance in the coming week and learn a lot from taking part. It attracted sailors from Netherlands, Poland, Russia, Italy, Canada, Norway and Bulgaria. Over the four days, they worked on tactics, boat set up and speed. A morning briefing each day was followed by an on the water session, with starts and racing, and then a debrief. The Finn Silver Cup clinic has become a regular feature in recent years to transfer knowledge to these emerging young sailors.

Measurement and registration are already under way with the opening ceremony on Friday evening. Eleven races are scheduled from Sunday 6 July, through to Friday 11 July. A practice is scheduled for Saturday afternoon.