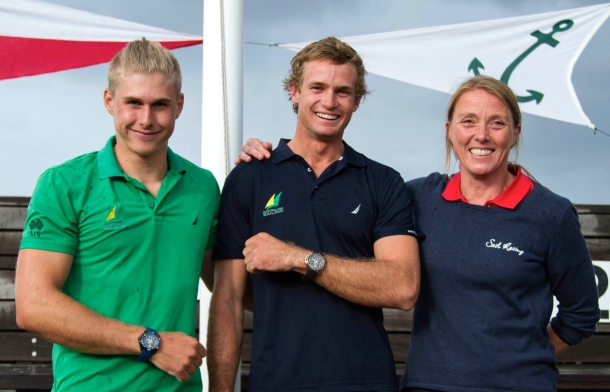 Queenslanders and Australian Sailing Squad (ASS) athletes Joel Turner and Lewis Brake are the new U21 Junior World Champions in the Olympic 49er class after winning the U21 category at the 2014 SEIKO Junior World Championship 49er in Aarhus, Denmark overnight.  ASS’s Harry Price and Angus Williams (NSW) completed the Australian success by finishing second in the same category.  In the overall U24 ranking of the event, the two crews came fourth and 13th respectively.

It was a challenging week in Denmark with shifty winds and difficult racing conditions and it was left to the best U24 skiff sailors in the world to see who could sort through the conditions most successfully.  The format of the week saw the fleet complete ten races with medal races having to be abandoned due to the conditions.

Coached by Queensland Institute of Sport’s assistant sailing coach Shane Smith, Turner and Lewis managed the conditions well and came out on top in the U21 fleet.

“The racing itself at this regatta was extremely tricky! Offshore breezes the whole week which provided very shifty and inconsistent winds. The result at this regatta means a lot for us in terms of recognition for the training we have put in over the last few months.  It also consolidates our knowledge of where we can and should be performing,” said Turner after the event.

Turner and Brake finished seventh at Kieler Woche in Germany last week and were happy with stepping up their performance in Denmark.  As Turner described, this will give the duo extra confidence moving into the 49er European Championships in Helsinki, Finland and the World Championship in Santander, Spain next:

“Our team performance was definitely backed up by our performance in Kiel and we had a good team environment with Harry and Gus and our coach Shane.  We now have a really good understanding of our strengths and weaknesses, which we can continue to work on during the Europeans and training before the Worlds!  Our expectations for Helsinki and Santander are now more defined as we have now raced most of the boats that will be attending at both of those events.”

Harry Price’s and Angus Williams’ second place in the U21 category underlined the potential of the current Australian 49er squad.  And as Angus Williams said after the regatta, the duo was very pleased with their performance:

“This was really our first proper event that we competed in the 49er and it went really well.  We weren’t expecting a lot, but did impressed ourselves so we were very happy with the outcome.  We didn’t have the best regatta in Kiel and this was a big step up.  Here in Denmark everything seemed to fall into place and go well for us.”

“The result shows that we are up there and with some more training back home in Australia and a few more regattas we can hopefully get some good results in the future.”

“The 49er Europeans will be next for us as well and it’s obviously going to be a fleet of much higher calibre.  We are going to have our work cut out for us, but hopefully we can get some good results under our belt and come away from it with lots of lessons and things to work on at home.”

The Australian AST and ASS 49er crews will compete at the 49er European Championships in Helsinki (8-14 July) next week and will be joined in Finland by Nathan Outteridge and Iain Jensen (NSW).