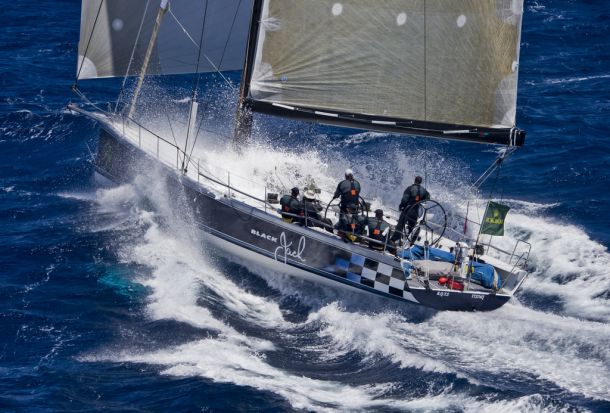 The RP66 Alive in the Melbourne - Vanuatu Race.Photo Peter Campbell.

Tasmanian yacht Alive is blitzing the fleet in the 1885 nautical mile Melbourne to Vanuatu ocean race; 24 hours after the start yesterday the Reichel/Pugh 66 has sailed out of Bass Strait and is about to gybe northwards.

The powerful yacht, previously named Black Jack until bought by Turner earlier this year, was “smokin’ along” under spinnaker and “blitzing the fleet” south-east of Mallacoota, according to the Ocean Racing Club of Victoria web site.

The galeforce westerly winds, which initially saw the start postponed 25.5 hours until 10.30am on Monday, have moderated but they have already claimed one casualty.

The Melbourne yacht Myuna, a Cavalier 37 entered the Rally division, broke its boom last night and anchored in Refuge Cove, in the lee of Wilson’s Promontory. She will head back to Melbourne today.

Another yacht, Ashley Stevens’ Jeanneau 36.2 Ariel II, also sheltered in Refuge Cove while the crew searched for a “serious” water leak. However, Ariel II reported to the ORCV this morning that the problem had been found and fixed and she was resuming the race.

At 10.30am, 24 hours after the start, most of the small fleet was still in Bass Strait, midway between Lakes Entrance and the northern tip of Flinders Island.

Tasmania’s Alive had sailed a more northerly course, closer to the Victorian coastline, seemingly to find flatter seas, making two significant gybes before setting a course due east to clear the south-east corner of the Australian mainland.

ORCV race officers are predicting fast spinnaker running conditions all the way through the Tasman Sea and the South Pacific to the finish at Port Vila, capital of the island state of Vanuatu.