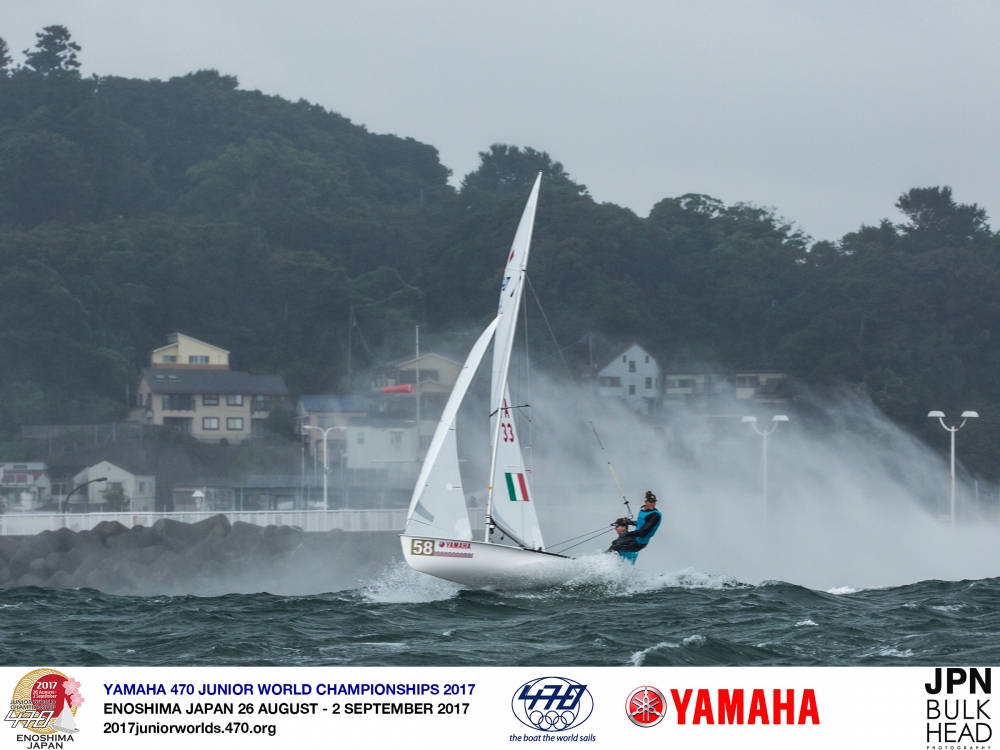 With the imminent arrival of Typhoon No. 15 in 2 days, the advance weather conditions kicked up the breeze and sea on race day 4 at the 2017 470 Junior World Championships in Japan.

Approaching from south of Japan, Typhoon No, 15 is expected to be at its closest to Enoshima in two days. The weather system being pushed ahead delivered an exhilarating and gruelling race track, with 15-20 knots of breeze, maxing to 30 knots, and a big, long swell boosted by the wind from the north, and choppy waves. With no sun, the temperature dropped 6-7 degrees, making it cold on the water.

The 470 Women raced first, then the Men, and whilst the front of fleet players enjoyed a great day, for the back half if was more a matter of survival. Just one race, before the Race Committee abandoned racing for the day.

Two races are scheduled for each fleet on Friday 1 September, starting with the 470 Men at 1100 hours and then the 470 Women. The forecast is for 17-19 knots at that time, with gusts up to 30 knots. Friday’s racing will wrap up the opening series, with the top ten boats advancing to the Medal Race and the rest of the teams contesting a final race on Saturday 2 September.

The women raced first, and the long-standing partnership of Benedetta di Salle/Alessandra Dubbini (ITA) proved their excellent teamwork in the heavy condition, staying in control to win the only race of the day with a massive margin.

It was impressive to see the teams master the conditions, with 15 boats finishing the race, and the rest either retiring or the less experienced teams opting not to race and remaining ashore.

470 MEN
Hippolyte Machetti/Sidoine Dantès took out yet another race win, attacking the race track in a superb display of showmanship. Duelling with Guillaume Pirouelle/Valentin Sipan (FRA), the two teams pulled away from the fleet in their own battle to the finish, as their remarkable downwind speed and boat control put them in a class of their own.

Machetti/Dantès have enjoyed an impressive year on the 470 campaign circuit, climbing to a #14 world ranking, from a string of results including 4th at the 470 Worlds.

Local stars, Daichi Takayama/Naoya Kimura crossed the finish in 5th and sit tight in third overall. With two more races to decide the medal race line up, this pair will be working hard to stay on the podium.

Towards the end of the race, the wind increased to 30 knots, as teams battled to stay upright.