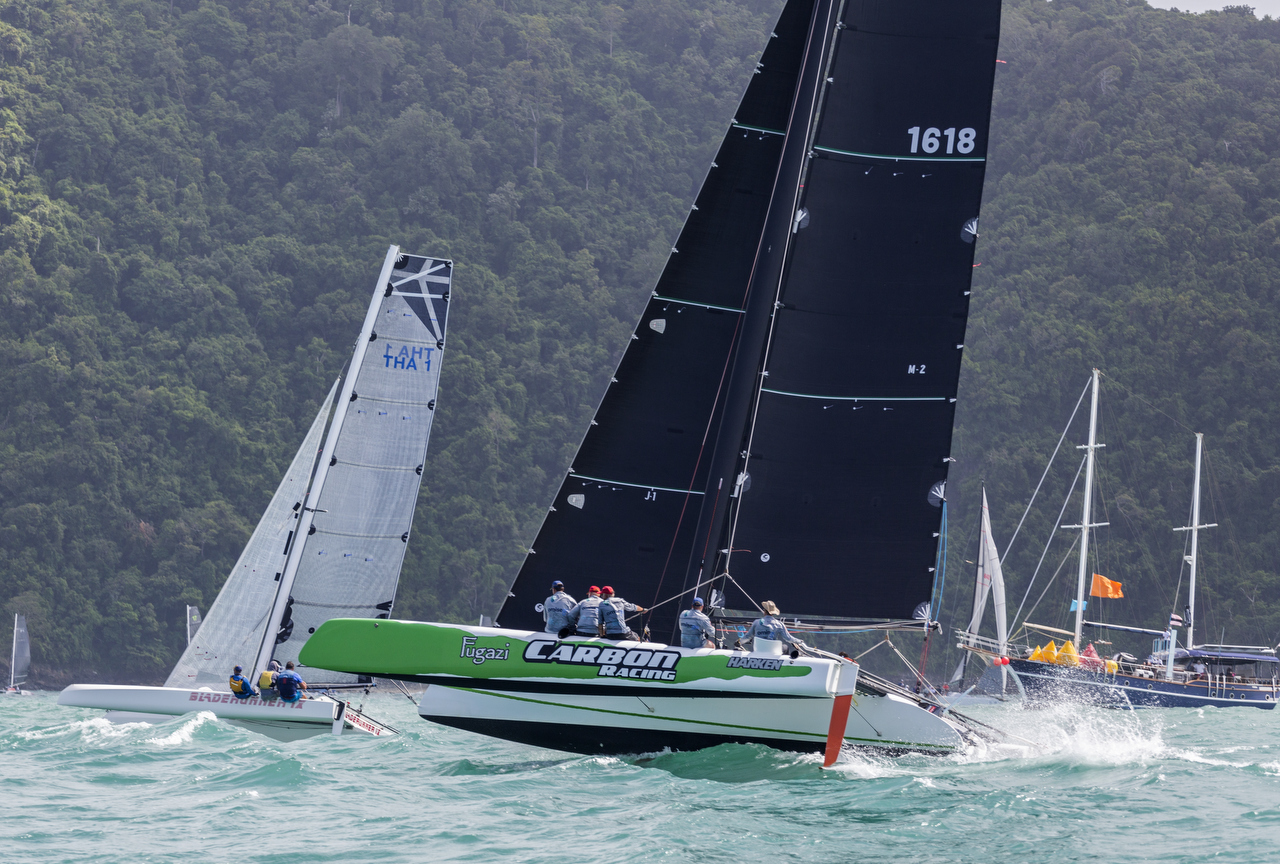 They say “bad things come in threes” and today, Day 3 of the 2018 Cape Panwa Hotel Phuket Raceweek, was clear proof that good things also come in threes as competitors enjoyed fantastic sailing for the third day in a row.

A one and a half metre swell on the outer course the downwind runs proved to be a surfer’s paradise where gains were made, and lost.

Because of 16 knots and lumpy seas, the Race Officer started the Firefly 850 and Pulse 600s outside, then sent them into Chalong Bay for flatter water, while the rest of the fleet enjoyed some spectacular racing on the outer course.

Two windward/leewards were the order of the day for the IRC classes and in IRC I Ray Roberts' Team Hollywood added two more bullets to their unblemished record. While Roberts was streaking away into the distance, the four 40-footers were thriving on the close racing with just metres in it on-the-water.

In the first race, following an issue with a spinnaker drop on the first run, East Marine Emagine slipped back and crossed the line in fifth, correcting out also in fifth. Loco sailed well, crossed the line in second and corrected out in third while Aquari beat Ramrod over the line by just five seconds claiming second place on handicap in the process.

With their spinnaker tangled at the end of the first downwind leg, the all-Russian crew on Megazip broached, recovered and then struggled to free themselves. Finally, after dropping the spinnaker they struggled to regain their rhythm and DNF'd the first race.

Aquari initiated some urgent repairs to their steering system between races and then went on to claim their second place of the day ahead of Loco in third.

Four 40-footers up against a TP52 is a tough challenge and as a result, the organisers have introduced a special IRC I – 40 Division to the results sheet. Reviewing the six races so far, it's clear how close these four are on-the-water and on handicap. Aquari currently sits top of the standings while Loco and East Marine Emgaine are tied on points with Loco in second based on countback.

Two more races for IRC II and two more wins for Phoenix means they are undefeated and carry a 10-point lead into the final day. Despite two DNS' yesterday, Prime Factor were back out on the course today and quick into their running with two second places, and with the discard now in play they sit second overall.

A slow start for Sailescapes Farrgo Ladies in Race 1 hurt them and although they managed to sail over Krabi Boat Lagoon Pinocchio to cross the line ahead, they head to settle for fourth on corrected time. They fared better in Race 2 claiming third place and with that are third in the overall standings with just one day to go.

It can take some serious breeze to get the cruisers throwing spray and today, they came into their own – surfing waves and flying off the top – putting on a show for all. And with this new found love of speed, there was some shaking-up of the results sheet.

Sand Groper got on the podium for the first time with a third in Race 1 while Lady Bubbly scored their first place of the series in Race 2. A 1,2 for Beaux Esprits see them remain firmly at the top of the standings while a 2,3 for Venture puts some space between themselves and Linda to remain third