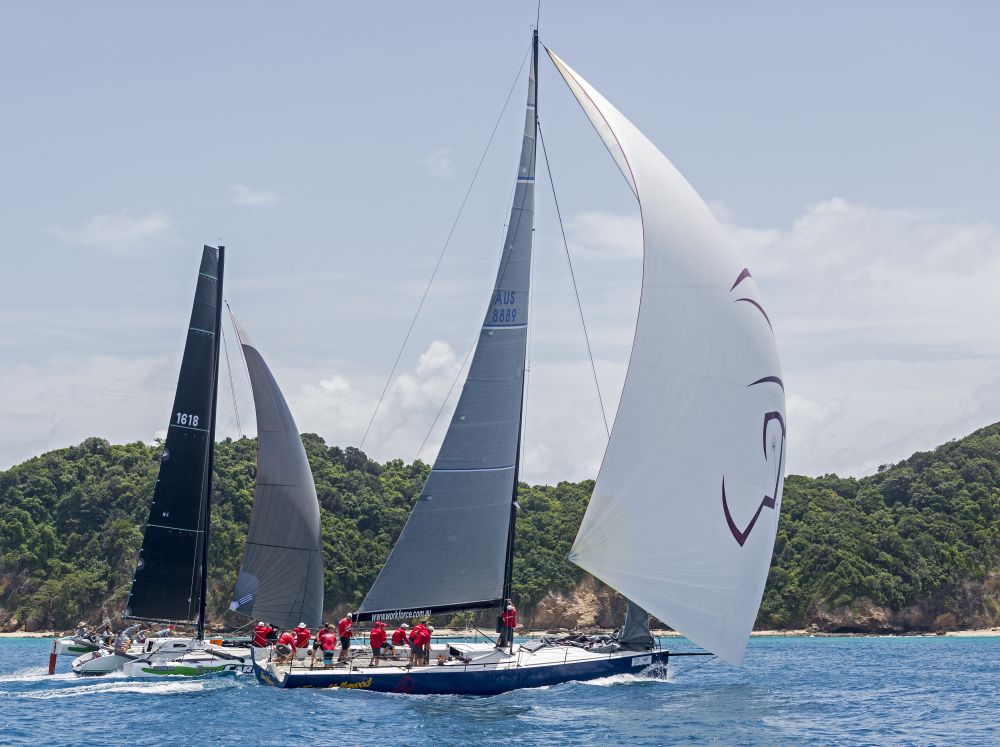 PHUKET, Thailand – There were some tired faces on the beachfront this morning as the sailors prepared for the fourth and final day of racing at the Cape Panwa Hotel Phuket Raceweek. No, those tired faces had nothing to do with the excellent party the night before, they were a direct result of three full-on race days with winds averaging 16-22 knots throughout, and a packed race schedule from Race Officer Simon James and his on-water team.

Another 16+ knotter today made for a fitting finale to a memorable 15th anniversary Cape Panwa Hotel Phuket Raceweek.

Ray Roberts' Team Hollywood have barely put a foot wrong all regatta. With slick crew work, the TP52 thrived in the conditions and the results sheet shows a dominating performance – eight wins from eight races. This is the third consecutive IRC I title for Ray Roberts, and second on Team Hollywood (2016 he won on his other TP52, Millenium Racing).

Chris Nicholls' Sydney 40 Aquarii (ex Rerefine, ex Windsikher, ex Foxy Lady 3) found their rhythm in the second half of the regatta and put a string of second places together to claim second overall while a slow starting, but fast finishing, Loco, skippered by David Dimmock, finished with a series of third places to move them up the standings to third overall.

In the IRC I – 40 Division, four competitive 40-footers (2x Sydney 40, 1x Farr 40 and 1x Club Swan 42) were enjoying some neck-and-neck battles on-the-water, where the smallest error was enough to cost a place. In the end it was the ever-young Aquarii that proved they can still mix it with the best on IRC handicap and won overall. Loco upped their game in the second half of the regatta to claim second while East Marine Emagine tied with Ramrod and won on count-back. Racing was so close that on a number of races less than 15 seconds were the winning margins on corrected time.

Susan Parker and her crew on Krabi Boat Lagoon Pinocchio put in some acrobatic displays yesterday and today they certainly had the bit between their teeth as they corrected out a full minute ahead of sister-ship Sailescapes Farrgo Ladies, and less than 30 seconds behind Phoenix to claim second.

A DNF in the final race for Phoenix blew it open for the rest of the class and the podium places, and it was the fast finishing Krabi Boat Lagoon Pinocchio who claimed their first place of the series and with that tied Max Palleschi's Prime Factor. On count-back it was the ladies who took second overall with Prime Factor having to settle for third, and with seven wins from eight races Phoenix defend their title and three-peat at Cape Panwa Hotel Phuket Raceweek.

A single race showdown in the Cruising Class saw Chris Mitchell's Lady Bubbly take today's win, adding to their win yesterday. However, it wasn't enough to overhaul Keith Garry's Beaux Esprits who held on to win the series by a single point. Venture, skippered by Tony Pfeiffer finished third.

Multihull Racing was finely balanced with Bladerunner IX and Fugazi tied at the top coming into the final day, and with two races planned anything could happen. Fast out of the blocks in Race 1 was Scott Galle's Bladerunner IX and although Dan Fidock's Fugazi went on to claim their seventh line honours, the time difference just wasn't enough and Bladerunner IX corrected out ahead to draw first blood. Fugazi would need to win the final race to tie the points and force it to a decision on count-back.

The second race saw the fleet off on a longer course, around the islands and flying their hulls the two trimarans made light work of it. Despite finishing 13 minutes head, it wasn't enough and Fugazi had to settle for second in the race and second overall. After some close racing and having come from behind, Bladerunner IX were crowned class winners while Cosmo had to settle for third overall.

With just one race scheduled for today, John Newnham and his Twin Sharks team had the title already in the bag and soon after crossing the start voluntarily DNF'd leaving today's bragging rights for someone else. And it was Voodoo, skippered by Hans Rahmann, who was bridesmaid in five races so far this week, that upped their game and took the final race win of the series and with that, safely secured second overall. A well earned third place today, and overall, goes to George Eddings' Blue Noze.

John Newnham extends his winning streak to six consecutive Phuket Raceweek wins and while that deserves praise, you only need to look at the time sheets to see how close the racing is between these one-design pock-rockets throughout the fleet.

In the Race 1 dial up for the Pulse 600s a port-starboard incident between Pixalux and SuDu Red saw Pixalux complete their penalty turn as the start gun went off. SuDu Red sailed off-the-line clean and Pixalux was playing catch-up for the rest of the race. A fourth for Pixalux was the outcome, opening the door for Simon Oliver's SuDu Red, who finished first in the race, to take the title to the wire.

In the second race, SuDu Red sailed impeccably to lead around the course and claim their second win of the day. A second place for Mick Tilden's Pixalux meant the two finished tied on points but due to more first place finishes over the series for Pixalux, they claimed the title while Zam Bevan's Multihull Solutions H30 finished third overall.

It's been four days to remember. Great winds, great racing and great parties is an unbeatable formula, and together with the Cape Panwa Hotel venue – its idyllic beachfront setting and convenient private pier access – has truly made this years Cape Panwa Hotel Phuket Raceweek one of the best yet.