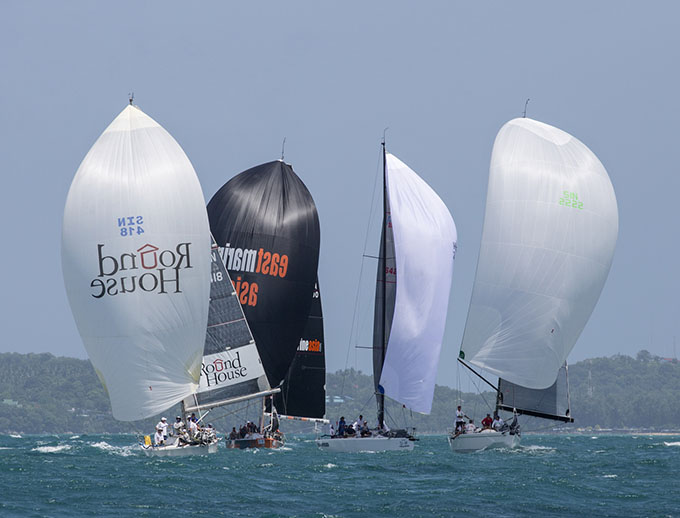 Thailand: Taking a leaf out of the 35th America's Cup rulebook where a top wind limit for racing was set of 24 knots, at the Cape Panwa Hotel Phuket Raceweek Skipper's Briefing, Race Officer Simon James announced if winds averaged over 22 knots at start time, racing would be postponed.

This is an understandable call when the Phuket Raceweek fleet ranges from TP52s to 20-foot Corsair Pulse 600 trailable trimarans.

As the Race Management team left the beach this morning, 28 knot gusts were recorded and the AP was raised onshore. It wasn't too long, however, until the wind calmed to a steady 16-18 knots, and at the same time the sun came out – a sure sign of an excellent day of racing ahead. The international media had their cameras at the ready.

Taking advantage of Chalong Bay's sheltered conditions, all classes raced into the bay today except IRC I which, led by Ray Roberts' TP52 Team Hollywood, enjoyed a fast windward/ leeward before heading off around Bon and the southern islands.

While Team Hollywood continues to dominate with two more wins today, the pack of chasing 40-footers are enjoying their own battle, switching places and where one mistake and a few seconds are the difference between hero and zero.

After a slow start on Day 1, David Dimmock's Loco jumped back into contention today with a second place in the first race while Craig Nicholls' Aquari placed third with just 30 seconds separating second to fourth in the first race – a sign of how close the 40-foot racing is.

Aquari went one better in the second race while East Marine Emagine re-found their form and finished third. The two sit tied on points, which breaks in favour of Aquari, at the half-way point of the regatta.

There appears to be no stopping Neils Degenkolw and his Phoenix in IRC II. He added two more wins to their scorecard today, making it four from four.

However, for the rest of the fleet, encouragement comes in the form of Sailescapes Farrgo Ladies who were on their transom in Race 1 to finish less than a minute behind on corrected time. Third place went to the Farr 1104 sister-ship, Krabi Boat Lagoon Pinocchio skippered by Susan Parker.

In Race 2, the Platu The Fox revelled in the breeze to take second place, just seven seconds ahead of the second all-female crew on Krabi Boat Lagoon Pinocchio.

Despite claiming line honours in both races today, the J/130 Jing Jing couldn't correct out onto the podium and had to settle for two fifth places.

After more than two hours of racing, just 20 seconds separated the top two in Cruising Class with Keith Barry's Beaux Esprits getting the better of defending champion Lady Bubbly and with that, take a two point lead in the standings. Third place today went to Venture, skippered by Tony Pfeiffer.

In Multihull Racing, Scott Galle's Bladerunner IX got the better of Fugazi in both races despite Fugazi claiming two line honours by more than 11 minutes each time, and with it they now sit two points behind Fugazi in the overall standings. Cosmo continued their consistent run of third places with two more today.

John Newnham's Twin Sharks recovered from a third in the first race of the series and with two wins today makes it three bullets so far and a clear lead in the overall standings. Two seconds for Hans Rahmann's Voodoo today brings them up the ranks into second overall while a 3,4 for Surf Patrol gives them a slim one point margin in third place.

Mick Tilden's Pixalux was back on the pace today following up his second yesterday with three wins from three races today. There wasn't much in it in the first race, however, as Simon Oliver's SuDu Red finished just 14 seconds behind while Zam Bevan's Multihull Solutions H30 was further back in third.

Racing continued to script in the second and third races of the day with SuDu Red second in both and Multihull Solutions H30 third. Meanwhile yesterday's winner, Brian Wood and his crew on SuDu Yellow, never started any of the races today and have now dropped to fifth place overall.