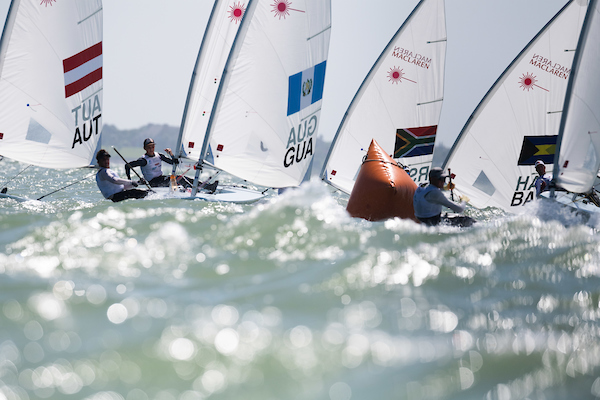 The racing portion of the 48th Youth Sailing World Championships wrapped up this afternoon with the final three gold medallists determined.

Carmen and Emma Cowles of the U.S.A successfully defended the gold medal they won last year in the Girls' 420 class to wrap up a sweep of the 420 classes for the U.S.A. JC Hermus and Walter Henry won the Boys' class yesterday.

Norway pulled a similar feat in the 29er classes. Pia Andersen/Nora Edland won the Girl's class in dominating fashion, winning the last race going away, while Mathias Berthet/Alexander Franks-Penty had to sweat out victory.

Berthet and Franks-Penty initially thought they had lost the gold medal by one point. As it turns out, they won the gold on a tiebreaker, turning tears to elation.

“This is the happiest day of my life,” said Berthet.

The Cowles twins posted seven first-place finishes and a fourth in their score line to win with the low score of 11 points, good for a 13-point margin over silver medallists Vita Heathcote and Emilia Boyle of Great Britain. The bronze medal was won by Spaniards Julia Minana Delhom and Silvia Sebastia Borso di Carminati.

It is the first time in 14 years that a Girls' 420 crew has won back-to-back gold medals and the Cowles did it in dominating fashion, often finishing well ahead of the chasing pack. In 16 races between the two regattas the Cowles have won 10 races and placed second five times.

They were very matter of fact upon returning to shore, barely showing emotion. But the sisters did relate that their coach, Steve Keen, hopped in the boat and gave them a big hug before they took a celebratory swim in Corpus Christi Bay.

“We're happy to be known as repeat champions but, to keep getting better, we have to keep an even keel to keep moving forward,” said Carmen Cowles.

In the Girl’s 29er, Pia Andersen and Nora Edland bounced back from second place on Wednesday to win the gold. They won the final three races of the series and posted the low score of 31 points, 14 points ahead of Americans Berta Puig/Bella Casaretto, who won silver. The bronze medal went to Russians Zoya Novikova/Diana Sabirova.

You might not expect two diminutive, blue-eyed blondes from Norway to possess a killer instinct but that's Andersen and Edland, lifelong friends who live about 10 minutes away from each other. They're following in the footsteps of their older sisters who raced the 29er for Norway at last year's Youth Worlds, but they've outdone their older siblings by winning the gold.

“Yes! We did it!” said Andersen. “It feels amazing – unbelievable – never believed it would happen.”

In fashion befitting gold medallists, Andersen and Edland blitzed the final race, winning by half a leg.

Their compatriots, Berthet and Franks-Penty, weren't sure what to believe. They entered the day with a 10-point lead in the Boy’s 29er Class but then sailed their worst race of the series. After posting all top-eight finishes in the first 11 races, including four first-place finishes, they went out and finished 19th.

Upon reaching shore they thought they had lost by one point, thinking they had placed 20th. But as it turns out three other crews were scored UFD for being over the start line early.

One of those crews finished ahead of the Norwegians. That was enough to put them in a tie with Seb Lardies/Scott Mckenzie of New Zealand and the Norwegians won the tiebreaker by virtue of the four race wins. Australians Henry Larkings/Miles Davey won the bronze medal.

“We knew we had to be within 10 places of New Zealand,” said Berthet. “We had that covered but then they came at us on starboard on the final downwind and we weren't able to jibe. They were to leeward and just behind, holding us out.

“At the finish there were only two boats behind us, but luckily we made it. It was an intense race,” Berthet said.

The six other classes were already decided before today's final race.

In the Boy’s' RS:X class, Geronimo Nores wrapped up the gold yesterday and then went out and won today's race. He finished with 17 points from a score line that included nine wins in 12 races. Italy's Nicolo Renna won the silver medal and France's Fabien Pianazza the bronze.

In the Girl’s RS:X class, Islay Watson of Great Britain won the Gold on the strength of three wins yesterday. She finished with 23 points and a two-point advantage on silver medallist Veerleten Have of New Zealand. The bronze medal was won by Italian Giorgia Speciale, who won the silver medal last year.

For Armit, the victory is good preparation for the Youth Laser Radial World Championship next month in Germany.

“It was great to go out and win this regatta, especially with a race to spare,” said Armit. “I've just been trying to improve and do the best I can possibly do. I learned a lot this week. It was good being able to test some different things this week in this fleet.”

Charlotte Rose of the U.S.A. won the Girls' Laser Radial yesterday. After placing second in today's final race, she finished 10 points ahead of silver medallist Emma Savelon of the Netherlands. Valeriya Lomatchenko of Russia won the bronze medal.

Sailors' will attend the closing ceremony this evening where they will be awarded nine perpetual trophies. The Bengt Julin Trophy, Sustainability Award and Nations Trophy will also be presented.