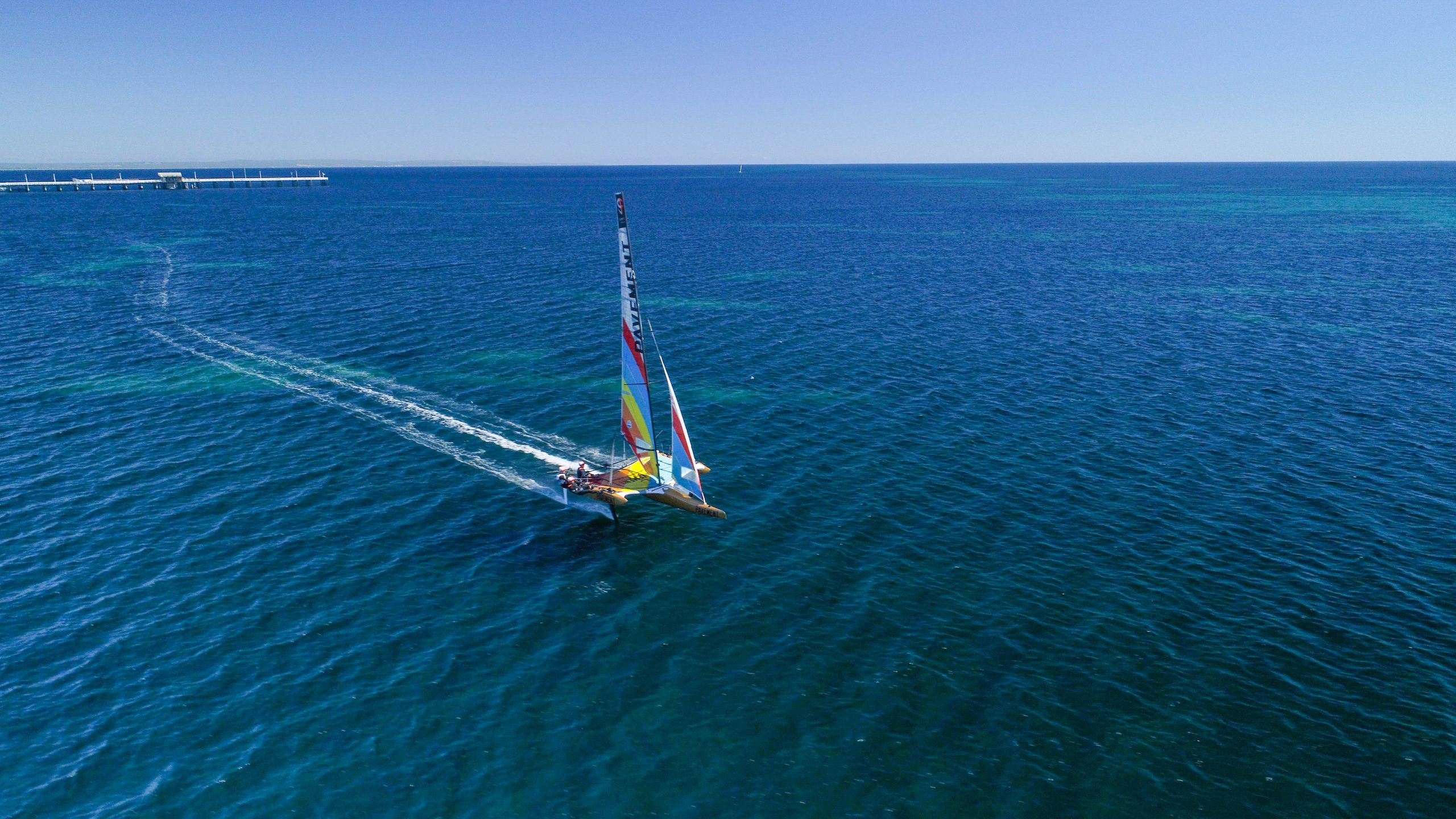 SuperFoiler with the Busselton Jetty in the background. Photo Rob Norman.

After a mammoth four and a half thousand-kilometre odyssey the SuperFoiler juggernaut has rolled into Busselton in Western Australia ready for the penultimate round of the SuperFoiler Grand Prix.

The massive logistical exercise witnessed the safe transport of the six SuperFoilers and their hundreds of supporting parts in three retro-fitted containers, as well as the cross-country haulage of the sixty event personnel that accompany each leg of the Australia-wide series.

The massive four state crossing is the furthest ‘fly away’ stage for the series to date – eclipsing the next furthest transition (Geelong to the Gold Coast) by nearly two and a half times.

“Busselton has definitely been on the radar for a long time. The racing conditions present consistent wind, flat water, gorgeous sunshine and the natural amphitheatre that the historic jetty creates. I am certain it will be more than worth all the logistical effort,” said SuperFoiler Grand Prix’s Head of Production Christo Macartney.

WA Tourism Minister Paul Papalia said it would help showcase the region’s aquatic attractions to a national and global audience.

“The event will provide a fantastic opportunity to promote Busselton and its iconic jetty – which is the longest timber piled jetty in the Southern Hemisphere – to some of the world's best sailors, as well as national and international audiences,” Mr Papalia said. “The State Government is excited to support the SuperFoiler Grand Prix and we look forward to welcoming all the competitors, and their support crews, to our State.”

The event will be amplified by more than eight hours of television and livestreamed broadcast coverage showcasing the racing and touristic attractions of Geograph Bay and beyond.

The SuperFoiler shore team will continue to work around the clock to deliver the six SuperFoiler machines (Euroflex, tech2, Pavement, Record Point, iD Intranet and Kleenmaid) to the start line for nine scheduled races across the Friday, Saturday and Sunday of the long weekend.

“The guys in the boat park work 24 hours. They are non-stop and without them this entire thing wouldn’t happen so all the sailors really appreciate it,” said Kleenmaid’s Bowman, World Champion Harry Morton.

The events are free for spectators to watch, although VIP Hospitably packages for the solitary event on the West Coast of Australia are available with Busselton’s historic jetty hosting Leg Four of the season.