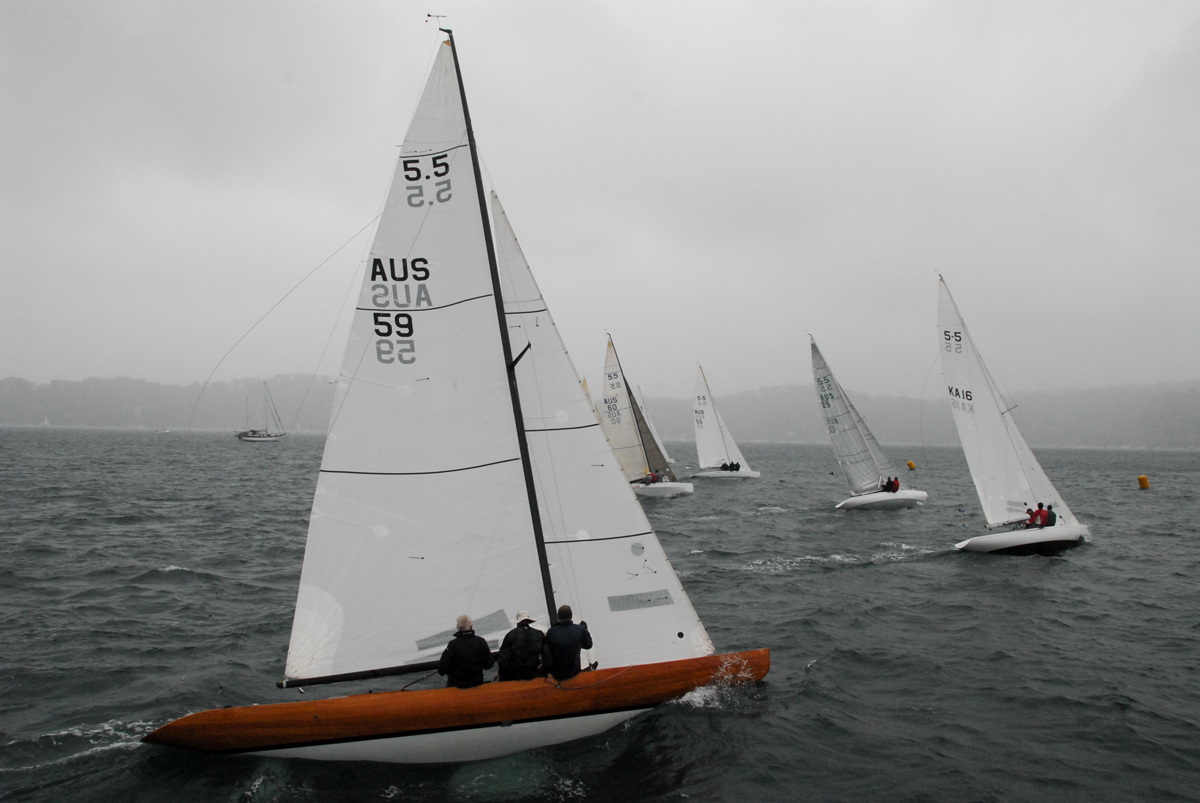 Skagerak, a Luders designed 5.5 Metre built by Lars Halvorsen in Sydney in 1974, took out the Int. 5.5m Class Australian Championship 2018, which was hosted by the Royal Prince Alfred Yacht Club (RPAYC) in Pittwater from 25-27 February. Skippered by Bob Stoddard, Skagerat ended up tied on equal point with Baragoola, a Briton Chance design, built by Hall and Johansen in 1968.

Concerns about wind and rain at the beginning of the regatta were forgotten when racing started on Sunday 25. Antares had a great first day in 15-20 knots of wind with two seconds and a win to take the early lead, though there were many boats heading home with breakages. A Fay/Luders design, and built by Ian Perdrieau in 1973, Antares has a distinctive ‘canoe’ bow and is a previous winner of the Australia Championship.

Baragoola ended the first day in second. She was one of the first 5.5 Metres to have the modern raised floor and separate rudder and was one of two Classic 5.5s racing the championship.

An inconsistent start for Skagerat was rectified on the second day with an excellent 1-1-2 to take the overall lead, after all the crews spent the morning doing repairs. The day started with 17-20 knots but eased through to 12 knots for the third race. Baragoola was never far away and ended the day just one point back, with Antares dropping to third. In the fresh southerly winds Plan B and Marotte both sustained some damage and called it a day.

On the final day, in a more subdued 7-10 knios,  Baragoola was the best boat of the day with a 1-2-3 clawing back one point to finish on equal points with Skagerak.  But, having won the last race, it was enough for Skagerat to win the title on count back. Antares took third, four points adrift.

Club Coach at the RPAYC, Tom Spithill, was sailing on Baragoola, the 2017 defending Australian Champion and the boat he part owns. “The boats are very enjoyable to sail and good to admire racing on Pittwater. Each boat has its own unique story and history. The boats ages range from 1960 – 2010, yet are still very competitive against each other. The Class has a huge following in Europe and we are hoping to see the Worlds hosted at RPAYC in 2020, fingers crossed.”

Stoddard commented, “The racing was nerve-wrackingly close and any of the top four boats could have won on the final day.” Each of the top four had won at least one race by the end of day two. “Despite the design differences between the boats, they are very similar in speed so the starts and mark roundings were very important to get right.  It was great to have Pam and crew come up from the harbour and join what would have otherwise an RPAYC fleet. The race committee did a fantastic job as the rain squalls and normal Pittwater wind fluctuations tried to put them off.”

“We are hoping to host the 2020 5.5 Metre World Championships here and that this event has generated more local and international interest in the class.”