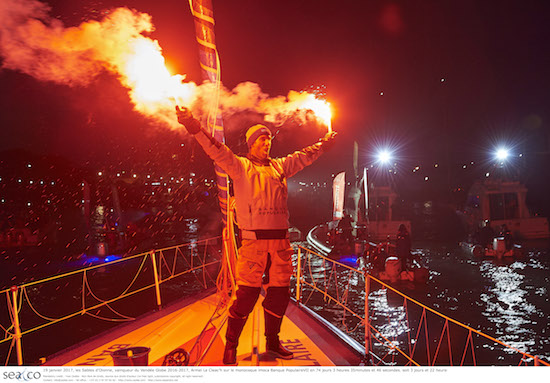 French solo yachtsman Armel Le Cléac'h has been recognised at the prestigious Laureus Awards for his outstanding win in the 2016/17 Vendee Globe Race. Beating five other nominees from sports such as surfing, snowboarding and skateboarding, Le Cléac'h was confirmed the winner at the gala presentation night held in Monaco.

Team New Zealand was a nominee in the Team award for their 7-1 win over Oracle Team USA in the America's Cup but missed out to the Mercedes-AMG Petronas Formula 1 motor racing team.

Tennis stars Roger Federer and Serena Williams took out the Sportsman and Sportswoman of the Year awards and Federer also picked up the Best Comeback award.

Le Cléac'h confirmed his position as the world's leading solo round-the-world yachtsman with his victory in the Vendee Globe, setting a new solo record of 74 days 3 hours 35 minutes and 46 seconds for the journey. Placed second in his debut race in 2008 and again, by just 3 hours 17 minutes, in 2013, the Frenchman held off a fast-finishing Alex Thomson to claim the ultimate prize.

For a full list of Laureus winners, go to https://awards.laureus.com/winners/