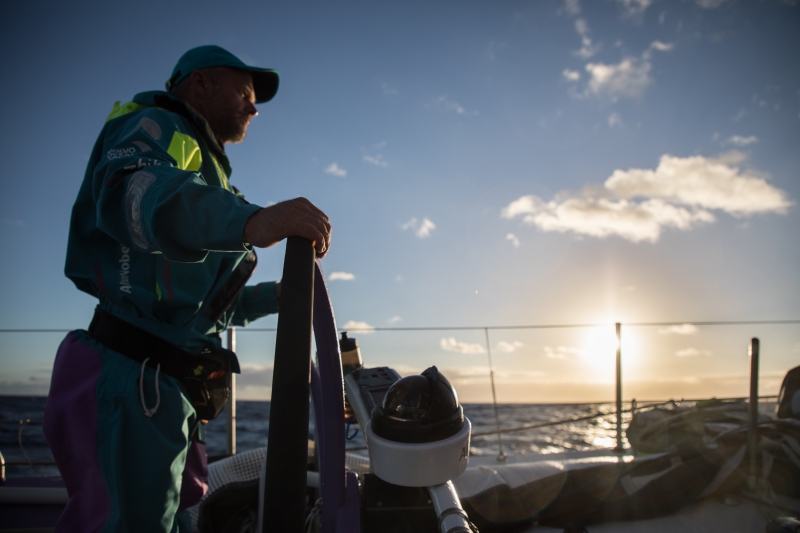 The finish of Leg 6 of the Volvo Ocean Race is shaping up to be a nail-biter after team AkzoNobel emerged from stealth mode on the public tracker on Monday with the narrowest of leads with just under 200 miles to go.

The Dutch team reappeared on the tracker shortly after 1300 UTC, ending 24 hours of mystery surrounding their position – and revealing that less than 12 miles separate them from third-placed Turn the Tide on Plastic.

Interestingly, their position wasn't included on the 1300 position report to the fleet, as they were just over 200 miles from the finish, so the other boats won't get their confirmed position until the 1900 position sked. (Under the rules of the event, once the lead boat closes to within 200 miles of the finish line, Stealth Mode ends for the entire fleet).

Simeon Tienpont’s crew had opted to ‘go stealth’ – hiding their position from their rivals and race fans – on Sunday in a bid to consolidate their lead on chasers Team Sun Hung Kai/Scallywag and Turn the Tide on Plastic.

But rather than extend their advantage, Tienpont’s team saw it reduced as they became the first boat to hit a patch of light wind lying off the northern tip of New Zealand.

The leading trio all have to navigate through the light winds, but AkzoNobel reaching it first has allowed Scallywag and Turn the Tide on Plastic to maintain speed for a few precious moments longer and close the gap.

The lighter breeze stretches around 70 miles from North Cape to Cape Brett at the entrance to the Bay of Islands before moderate north-easterlies will fill in providing fast reaching conditions into the finish line.

In essence that gives Scallywag and Turn the Tide on Plastic just 70 miles to make any kind of passing move on Akzonobel.

With a tricky 24 hours left at sea, the Leg 6 podium is far from decided.

“We’ve got a little bit of a buffer but getting from North Cape to Cape Brett is looking light and shifty,” AkzoNobel’s Brad Farrand said. “The next 12 hours are going to be crucial.”

With the top three teams so close, Farrand said nothing was being taken for granted.

“Winning the leg isn’t something we’re talking about,” he said. “We’ll wait for it to happen, and then we can talk about it.”

On board second-placed Scallywag, skipper Dave Witt was taking delight in watching the deficit to AkzoNobel reduce with each position report.

“The breeze is going to disappear going round the top of New Zealand,” he said. “Akzo are going to get there first and they will be pushing the tide for a few hours. We won’t. There might be a little bit of a restart here.”

The dilemma facing the top three teams is whether to punch into adverse current closer to the coast on the shorter route to the finish line or head further offshore to pick up favourable current at the cost of more miles.

As Turn the Tide on Plastic chase their first podium finish, skipper Dee Caffari said she was prepared to push her crew to the limit.

“When we get to the light patch we will run a standby watch so we’ve got extra people to move things around and furl things so the drivers and trimmers stay focused,” she said. “Then, when the wind fills in, we’ll have everyone up so we’re ready for anything. We’ll leave nothing left in the tank.”

Early leg leaders Team Brunel slipped to sixth after a gamble to find wind closer to the coast of New Caledonia failed, allowing Dongfeng Race Team and MAPFRE to slip past.

At 1300 UTC Bouwe Bekking’s crew were trailing the two red boats by almost 100 miles, and the leaders by almost double that.

“We’re still fighting so we might still be able to catch up but it’s looking unlikely,” Brunel’s Kyle Langford said.

“We’ll do everything we can to catch those guys, but it’s disappointing that when we’ve been performing much better this leg to see it all slipping away.”

Meanwhile, MAPFRE and Dongfeng continue to engage in their own private match race. On the 1300 UTC report, the two were within less than a mile of each other. This is a battle that appears destined to continue all the way into the Waitemata Harbour finish line.

The latest ETA for the leaders is early afternoon UTC tomorrow (Tuesday 27 February).