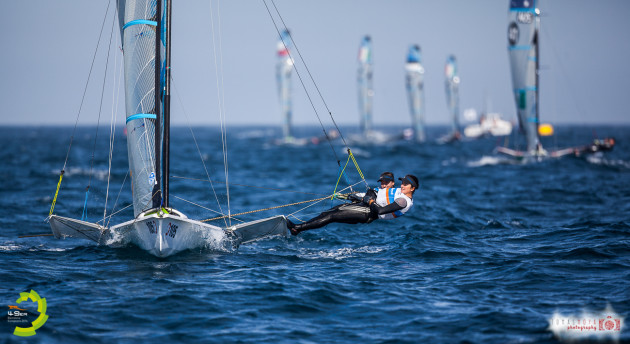 The super competitive 49er fleets lined up and stretched their legs as racing got under way from the world class Barcelona International Sailing center. Just up the Mediterranean beaches from where the 1992 Olympics were held, the 2016 Olympic fleet and the rest of the world chasing skirmished in the opening races.

The 49erFX raced in the afternoon sessions of the day and Netherland’s emerging stars Annemiek Bekkering and Annette Duetz started the championship in the same dominant manner that they took home the Princess Sofia Trophy from Palma de Majorca last week. They Dutch duo took all four races in straight bullets to start the championship, but unlike in the 49er fleet, with only 18 boats per qualifying fleet in the 49erFX the overall lead they were able to build up was only a handful of points with most of the contenders following closely behind. Their slim lead wasn’t enough to dampen their excitement at performing so well.

“It was a really great day, my best ever I think,” said Annemiek. “We won three races in a day in Palma last week. Perhaps when I was a little girl on the lake I might have won four races in a day but I can’t remember. It was a special day for us.”

The Australian pair of Tess Lloyd and Caitlin Elks again had the early advantage over rivals Olivia Price and Liza Stolly but there are just five points and two places separating the pair after four races. Lloyd and Elks are 12th on 15 points after one drop, while Price and Solly are 14th on 20. The other Australian pairing, Haylee Outteridge and Nina Curtis, is also within striking distance in 17th place on 24 points.

The yellow fleet of the 49er got racing under way to start the championship, and all three active class medalists drew the same fleet and engaged with one another. Once again it was the London Silver medalists Peter Burling and Blair Tuke who got the best start of all. The duo, unbeaten in 24 straight 49er regattas, passed 2008 Gold medalist Jonas Warrer with new crew CP Lubeck on a nifty hoist at the top mark in the first race, and then passed them again in the second race on outright downwind boat speed.

In the third race of the day, it was London 2012 Gold medalists Nathan Outteridge and Iain Jensen who took a win, with Burling and Tuke close behind, unable to pass the Australian reigning Olympic champions who covered them as necessary to preserve the win.

The racing was right-side-favored for the most part throughout the day, but there were enough opportunities on the left for teams to rescue beats when they got lucky. In fleets all trying to get to the right, starting skills were at a premium even though the open waters off Barcelona are unbounded. Bekking and Duetz used four different methods to get right, but never varied from their dominant strategy of using their speed to get the favored side. Farther back in the fleets were extremely busy with so much talent on display.

In the Blue 49er fleet, Austrians Nico Delle Karth with Niko Resch, fresh off their Silver medal at the 2016 World Championship got off to a good start with a 1, 7, 2 to sit in second overall after the first night.

In the battle of Britain, neither 49er contenders of Pink/Bithell or Fletcher/Sign could keep pace with the young chasers James Peters and Flynn Sterritt, who scored a 3, 3, 8 to comfortably sit in the top 10. While British trial details remain secret, it’s believe that a medal from Peters/Sterritt would stir up the selectors’ debate even more than the tight fight already requires.

The forecast for the rest of the week in Barcelona is outstanding, with endless sun and wind on offer. It could get really windy for the final day of qualifying, so putting in solid performances on day 2’s qualifying will be vital in case the third day gets blown out.

The schedule for day 2 is for the 49erFX to start with three races followed by the 49er doing four races.