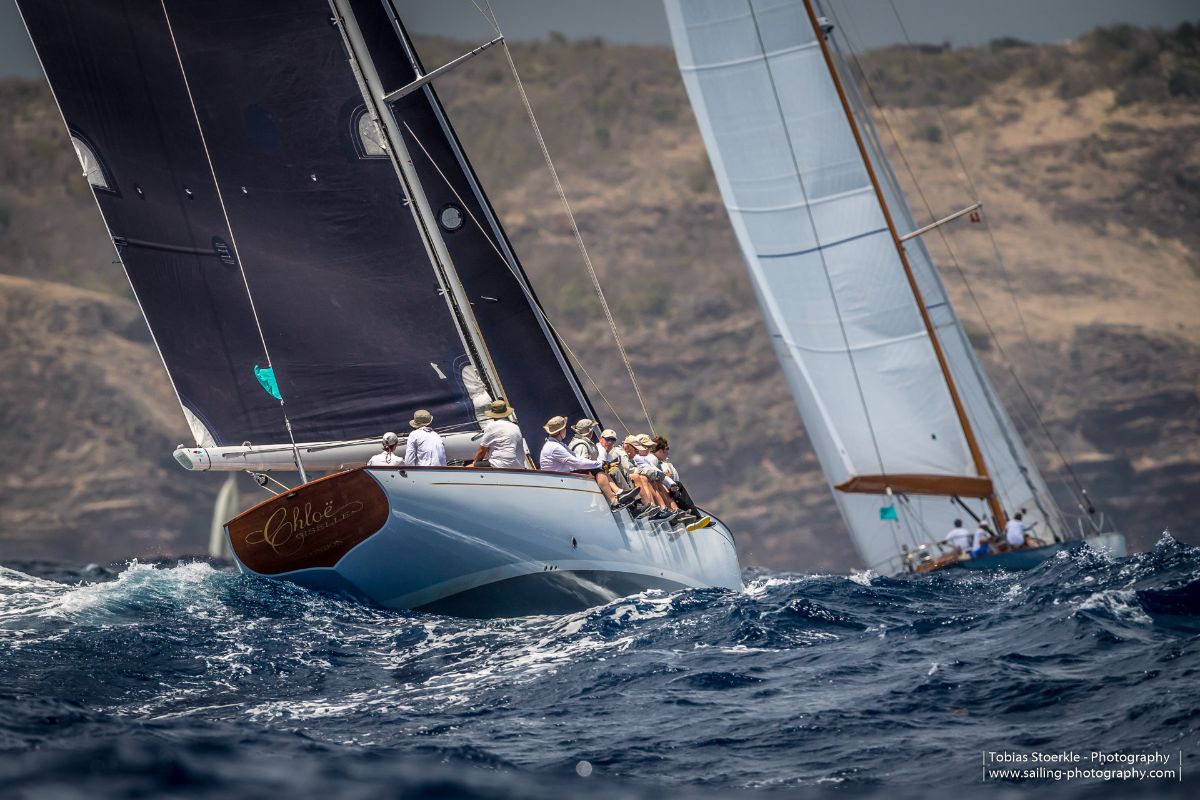 In the Spirit of Tradition Class

Antigua, WI (April 21, 2019) – Race Day Three of Antigua Classic Yacht Regatta, sponsored by LOCMAN, was the Cannon Course, a memorial to the 'father of Classics' Kenny Coombs, who was in the heart and soul of the hundreds of sailors taking part in a great exhibition of classic yachts racing.

Whilst the 23nm race was simplistic in its two long reaching legs, it was an ideal display of the true grandness of classic yachts in their element, flying in the ocean spray, saluting competitors at every opportunity. The 141' racing schooner Colombia, in all her splendour, took fleet line honours in an elapsed time of 2 hours 29 minutes and 30 seconds. After the race, the fleet took part in the Parade of Sail. The UNESCO World Heritage site, Nelson's Dockyard, and Antigua Slipway, was packed with well-wishers, cheering on the spectacular fleet, as they passed the hostelries along the restored Georgian dockyard.

In the Traditional Class, the sloops; Genesis, Sweetheart and New Moon, have been enjoying close racing and fits and giggles ashore, along with Mark Wibberley's ketch Vendia. The jolly crew of Vendia, a 1943 converted Danish fishing boat, threw a dock party after racing today with the Carib Beer flowing for all and sundry. Alexis Andrews' Genesis built by Alwyn Enoe, won today's race by just 43 seconds from Sweetheart, which was built by Zepharin McLaren, and is skippered by Charles Morgan. 'Sloopville' is situated right outside Skulduggery Cafe in Falmouth Yacht Club Marina, where the apres-racing banter is loud and cheerful, especially so today, as Genesis and Sweetheart go into the last race dead-level on points.

“It's really tight, there was no relaxing today,” commented Alexis Andrews. “Racing on a sloop is the best; it's fast, it's wet, and these boats are just made to climb the waves, drop in the troughs, accelerate, and take off! The feeling you get from all of this organic wood and canvas working in harmony with a really good crew – there is nothing better in life. Tomorrow is the decider between Sweetheart and us, it is really intense, so we have got to get our game on. The first thing we are going to do is to get the Sweetheart crew really messed up tonight!”

“I'm racing with friends and sailors we know from other boats plus my Rastafarian gardener who races every year,” smiled Paul Deeth. “It's really great sailing, and with the big flag, we got a heroes welcome coming into Nelson's Dockyard, so it was a really special moment. It was nice to hear lots of cheering from the proud Antiguans on the dock – a big buzz.”

Petrana is one of three yachts undefeated at Antigua Classic Yacht Regatta; Jonty & Vicki Layfield's 1972 S&S Swan 48 Sleeper, and the Frary family, racing their 58' ketch Arrluuk, make up the trio. A special mention should go to the 1936 41' Rasmussen sloop Seefalke II, skippered by Oliver Greensmith, which showed great seamanship in yesterday's race by standing by Paloma VI after a collision. Antigua and Barbuda Search and Rescue (ABSAR) also attended the scene, and whilst Paloma VI was damaged, the team returned to Falmouth with no reported injuries on board. After receiving redress, put forward by the Race Committee, Seefalke II won class in Race Two. Carlo Falcone's 1938 79' Alfred Mylne yawl Mariella won the race today, setting up a winner takes all last race.

In the Spirit of Tradition Class, the Spirit 64.5' Chloe Giselle, owned by Chloe and Mike Hough, won their second race, to lead the class going into the final encounter. The couple come from Lymington, UK, and are members of several renowned yacht clubs including; the Royal Lymington and Lymington Town SC, the Royal Yacht Squadron, Royal Cornwall YC, and the Royal Armoured Corps YC. Alexis Lepesteur's 80' sloop Volterra, designed by German Frers and John Alden is second in class, just a single point ahead of the 49' Jim Taylor sloop Blackfish, owned by Carolyn and Commodore Ron Zarrella, from the Great Harbor Yacht Club, Nantucket, USA.

Chloe Giselle is named after four members of the Hough family; Chloe, Georgia, Isabelle and Ellie. Mike and Chloe share the helm racing at 'Classics. “It was tough racing today with high waves and confused seas, but we have a very experienced crew which comes from Lymington, Suffolk, Cornwall and Lancashire,” commented Chloe Hough. “This our third 'Classics and we absolutely love it. It is challenging, we have good competition, but as the week goes on we get more confident. We have a really good team and it is just awesome to sail the boat so well. Today we had some nice waves, I love to helm, but on the last reaching leg, Mike and I kept swapping over to keep the performance up. In a really nice way, we had a speed competition, and saw 14 knots down some of the bigger waves.”

Tomorrow, Monday 22 April, will be the final race of the 32nd edition of Antigua Classic Regatta on the Windward Course. Eight classes remain undecided going into the last race, which will be followed by the Prize Giving on the lawn of the Antigua Yacht Club.