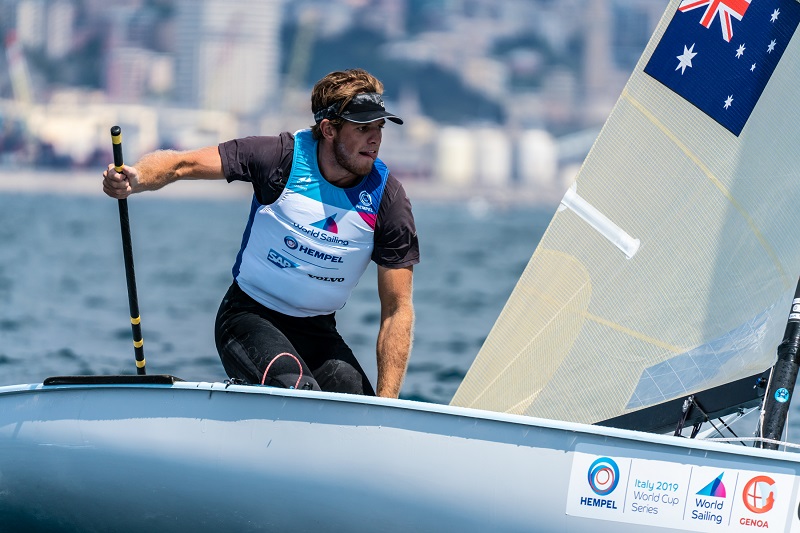 Racing with the stunning city of Genoa as a backdrop, Calvert told how a few others match raced around the course, giving him the freedom to sail cleanly.

“It was good day. It was a nice way to wrap up a good week. It was a bit of a break-out week for me; a good performance. It’s nice to be at the top,” said the 21 year-old who has sailed two seasons in the Finn now.

Calvert, whose family name is well known in Australian sailing circles, sailed the full European circuit last year and recently competed at Palma and Genoa, the first two events of the European season. “This is 100 percent my best result away from Australia,” he said.

“Even though a lot of the top guys are missing, I raced guys who are often in front of me. Now I’ve beat them, so it is a definite move forward in terms of confidence. Next is the big one; the Europeans in Athens in three weeks. My goal is to get closer and closer to the big names.”

One of those big names is veteran campaigner, Jorge Zarif (BRA), who finished fourth at the Rio Olympics and won the Finn gold medal at this event.

There is little time for celebrating, as Calvert will be on a ferry to Athens tomorrow, “To start the process of preparing for the Europeans,” he commented. “There are areas where I need to make some improvements, so I’ll meet Rafa (coach Rafa Trujillo) there and get everything set up for a good event,” he ended.

Before the Laser Radial Medal Race, 20 year-old Mara Stransky’s scorecard included a pair of seconds and a third, with only one finish outside the top eight. Most of the big names were missing from this event, but Rio 2016 Olympic bronze medallist, Anne-Marie Rindom (DEN), competed and came from behind to win the gold medal.

The only Australian to make the Laser Radial Medal Race, Stransky said: “I was too nervous to really know what was going on around me. I am pleased with the way I sailed here, but a little disappointed with my Medal Race.

“Being my first time, I was a bit flabbergasted that I got to be there at all, so I wasn’t prepared. But I’m pleased how I came through without a coach and did quite well.”

Incredibly, the Queenslander only started racing a dinghy five years ago, “At a Southport Yacht Club race – and I came last! Nur Shazrin Mohamad Latif (a Malaysian sailor) saw me in one of those early races. I was hopeless; had no idea. I don’t have a coach, so her coach boat towed me to the course today. She (Mohamad Latif) said it was ironic to think we were here in the Medal Race together.”

Stransky has lived on a boat her entire life. “I currently live with my parents on a 50 foot catamaran my dad designed, so boats have always been part of my life.”

On her meteoric rise to the ranks of Olympic class sailing, she says: “I think I'm lucky to get to work with good people. Tom Needham (raced a 49er in Genoa) was one of my main training partners going back, and the other Australian girls, I wouldn’t be where I am if not for them. I feel lucky for being in the right place at right time in terms of coaching and racing.”

Stransky says she had a terrible year of racing in 2018. “I missed re-qualifying. I had big expectations after a good previous year. That was a bad mistake,” ended Stransky, who leaves for the French Olympic classes regatta in Hyeres on Tuesday ahead of the Laser Radial Europeans in Portugal at the end of May.

The Australian Sailing Team’s Mat Belcher and Will Ryan had a disappointing Medal Race in the 470 Men’s. After making a quantum leap up the leaderboard to seventh place yesterday, the pair was called OCS today. Their race was over before it started and resulted in 10th overall.

Australian Sailing’s Performance Director, Iain Murray, commented on the Australians’ performances: “The Gilmours have a new boat and are sailing it well. It’s amazing for them to beat Peter Burling and Blair Tuke and others. It’s a big step in the right direction.

“Conditions have defied even the best; it’s been difficult for the athletes and race officials all week. They have all sailed in extremely difficult conditions in Genoa. Most have had high scores and are up and down,” he said.

“It’s nice to see the Gilmours, Mara, Jock and others stepping up to the plate, but it’s hard to draw conclusions after such a topsy-turvy week weatherwise. Some of the squad haven’t quite got there, but other very good sailors around them haven’t got there either.

“It’s hard to draw any long-term conclusions right now, as some have had barely any racing and the conditions have been very difficult for all sailors, as can be seen from the results in general.”

As an example, Murray said, “The guys who won the 470 Men’s in Palma (Sweden’s Anton Dahlberg and Fredrik Bergstrom) finished 18th. These have not been typical conditions,” Murray said.