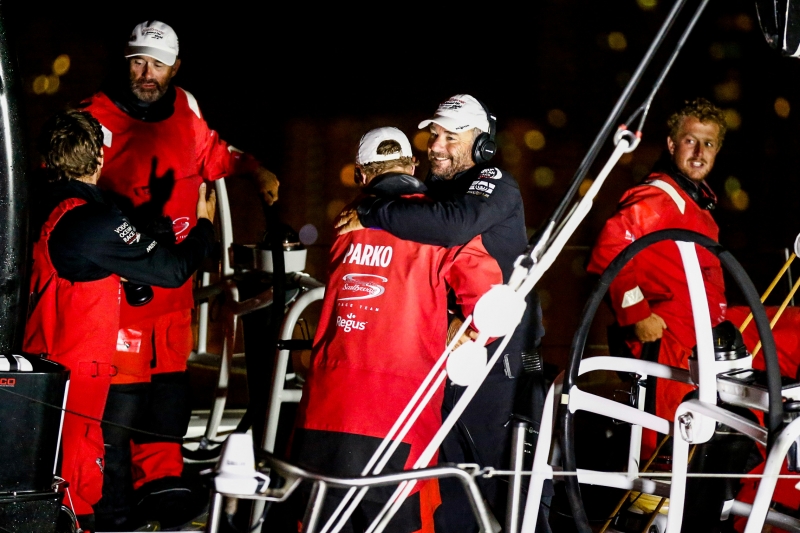 The David Witt skippered Sun Hung Kai/Scallywag has won Leg 4 of the Volvo Ocean Race, from Melbourne, Australia to her home port of Hong Kong.

It’s an historic win for Australian David Witt and his team who had to overcome significant setbacks on the leg before grabbing the lead with a bold tactical call out of the Doldrums last weekend.

“We had a bit of a plan and we stuck to it. Sometimes it works, sometimes it doesn’t and this time it worked for us,” Witt said.

It was an extended Doldrums crossing, and Scallywag had moments where she appeared to be in a strong position.

But late in the crossing, after falling behind the fleet again, Witt and navigator Libby Greenhalgh, made the decision to cut the corner and turn to the west earlier than the opposition who kept pressing north in search of stronger winds.

The move paid dividends nearly immediately on the leaderboard as Scallywag had fewer miles to sail to the finish line, but pundits cautioned that the teams in the north would almost certainly overhaul them as the tradewinds filled in from the north-east.

Even when the team dropped miles after executing the flawless recovery of Alex Gough after he was swept off the boat by a wave, Scallywag returned to racing and extended to nearly a 100-mile lead.

But then, the chasing boats began chipping away at the lead. Two days out from the finish, the margin had been cut significantly and the pressure mounted.

“I was really impressed by the way we operated over the past couple of days,” Witt said. “We had a pretty big lead and then through no fault of our own, about two-thirds of it got taken away. But we stuck to our guns, did what we thought was right and it’s worked out.”

With the Leg 4 win, Scallywag picks up 8 points (7 points for first place plus a one point win bonus). It will vault the team up to mid-fleet on the overall leaderboard, in a very respectable fourth place.

“It was always going to take us longer than the others to get up to speed as we were the last to enter,” Witt said.

“All teams need a bit of confidence and I think one thing that is underrated in sport is momentum and this will certainly give the Scallywags plenty of that… We’re all still learning and we’re going to keep getting better as we go on.”

Witt has acknowledged the significance of the win as the local team leading the fleet into the first ever Volvo Ocean Race stopover in Hong Kong. For the team owner, Seng Huang Lee, who has supported Scallywag sailing over the years, it’s a big moment.

“We’re a privately owned team and our owner, Mr. Lee, has poured his passion and enthusiasm and vision into this project and this win will be very special for him… Winning this leg will be a massive platform for Scallywag going forward.”

Behind Scallywag, Vestas 11th Hour Racing and Dongfeng Race Team are battling for second place and expected to finish approximately two and three hours behind the winner. The rest of the fleet is forecast to finish at intervals over the following 12 hours.