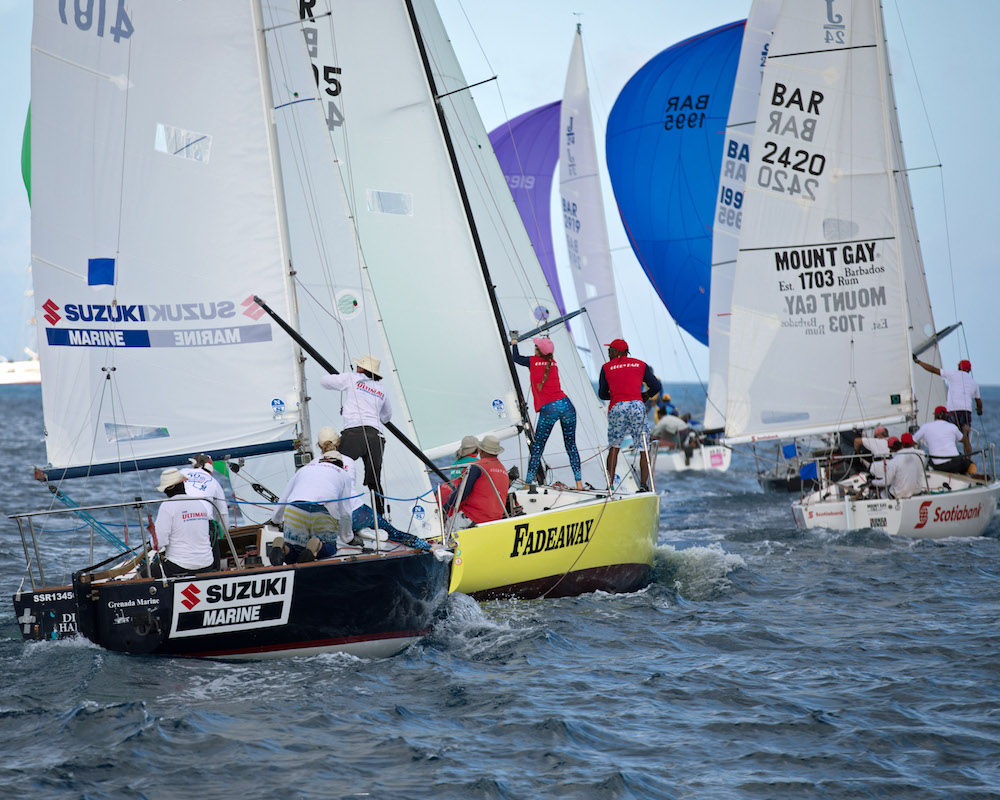 Bridgetown, Barbados: The launch of the J/24 race series at Barbados Sailing Week attracted quality competition and with four races on short windward/leeward-style courses in Carlisle Bay, there was barely time to draw breath.

Variable and shifty winds up to 17 knots also kept the racing exciting and close, which resulted in different winners in each race.

Gregory Webster and team on the 1981-built Phoenix started the day on a good note with an impressive bit of sailing off the line with a port tack start. Risky it may have been but this well-tuned local team sailed fast, high and, by playing the shifts and taking the favoured right-hand side of the course, they led and went on to win the first race of the day. They then finished second to Robbie Yearwood’s Die Hard in race two.

Neil Burke and team on Impulse claimed the win in race three, while Cyril Lecrenay and team on Bunga Bunga took the final win of the day in race four after an intense covering match with Die Hard on the approach to the finish line.

Commenting on closer than close final win, Lecrenay commented: “It was a tough one and, at one point, I thought we’d lost it but it was just a matter of keeping cover on Die Hard and finally finding a good line to the finish.

“I think it was tip top crew work that really counted today and, because we have sailed together for three years constantly we barely have to say anything to each other because everything on the boat runs smoothly.”

As well as good team work it was also consistency that paid, which means that with a win and two second places to count, Yearwood and team from Grenada on Die Hard lead the series by two points from Bunga Bunga with four races to go. Yearwood chatting after the race said today’s racing was all about risk management.

“Putting our lack of preparation, and confusion in the first race to one side we put our heads down, focused on our strengths with the aim to live up to our name – Die Hard. Thankfully it worked and we made a comeback. A two-point lead however, is not a comfortable margin at all so anything can happen tomorrow. Thankfully we have good speed so we plan to continue what we are doing” Yearwood said.

Elsewhere the final day of Coastal Racing was reaching its crescendo with fleets battling it out for all-important overall points. Although the well-sailed J/105 Whistler with Peter Lewis and his seasoned team had already secured the overall win going into the final race, the challenge was on to make it a hat-trick.

Their smart pin-end start, and good first beat helped keep Conviction – David Staples’ TP52 – at bay on corrected time and, after a 16nm race that took the fleet along the south coast to Oistins, Conviction once again had to settle for second, and second place overall in the series.

Having missed a day of racing to carry out sail repairs, Andreas Berg’s team on Luna (German Dufour 44) was on form again today and took a well-deserved third. However, a final fourth place for Spirit of Juno (UK Farr 65) was enough to secure third place overall.

Bill Tempro’s Hunter 36 Sail La Vie was today finally able to break Mandy’s (Hunter 29.5) total class domination with a final race win in the Non CSA division. After winning the first two races and securing the overall series win, Bruce Robinson and team on Mandy were unable to match Sail La Vie for speed. She led the fleet round the first mark pulled out enough to take first place, which left her in second place overall by just one point.

With the all-comers Coastal Racing now concluded, competitors are looking forward to the next rum-fuelled party just along the beach from the host club at Copacabana Beach Club. Tomorrow’s lay day not only provides an opportunity for competitors to prepare for the Mount Gay Round Barbados Race on Sunday, but also gives teams a chance to enjoy the specially laid on Regatta Surf & Turf Polo Match, which is taking place in the afternoon at Holders Polo Field.