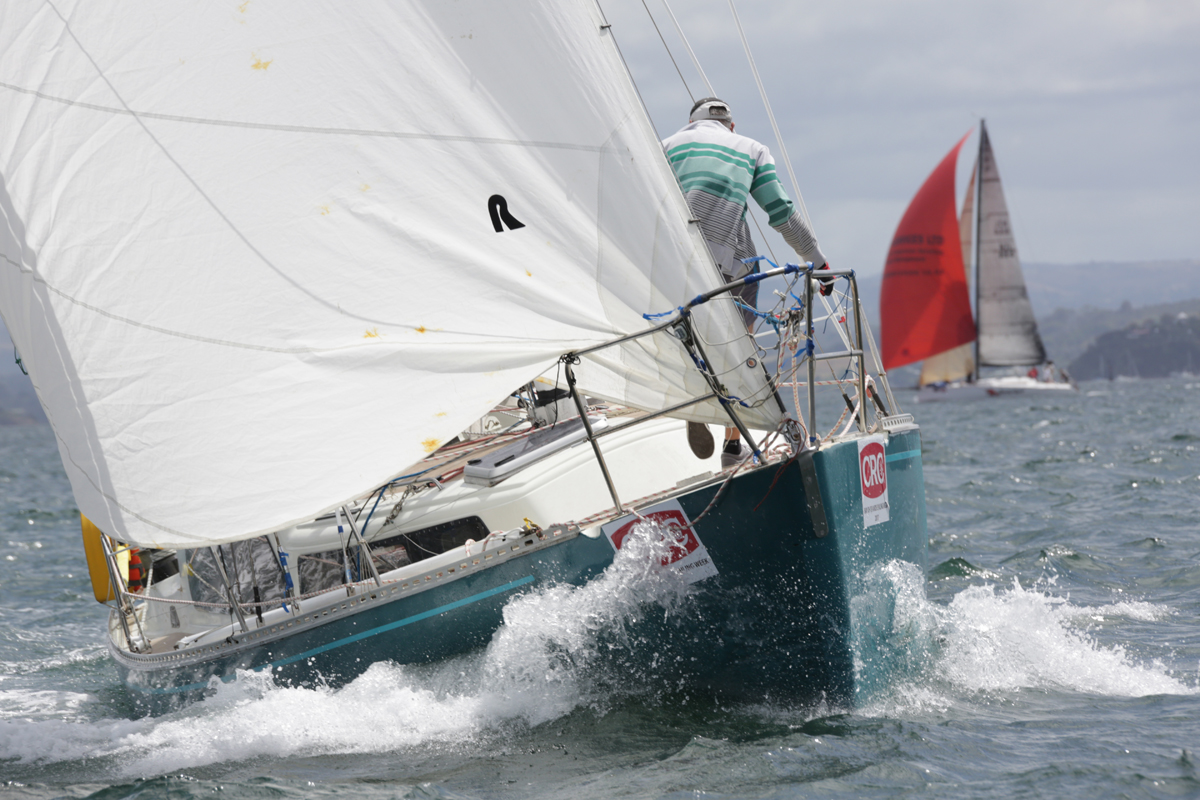 An absolutely stunning day. That was the consensus of those on the water today for the final day of the 15th annual Bay of Islands Sailing Week regatta.

Prior to racing this morning, regatta weather advisor Mike Quilter had predicted a slight delay in racing, with conditions he said looked: “glassy until around midday, with a late sea breeze filling in from the Ninepin about 1 o’clock”.

Fortunately competitors didn’t have to wait quite that long, with a consistent 8-10 knot sea breeze filling in from 11.30am, allowing racing to get underway in picture perfect Bay of Islands weather.

David Howarth, who is visiting the Bay of Islands from Scotland, said: “It was fantastic. Loved it. I’d love to come back next year, but it’s a bit of a long haul from Scotland. It’s the first regatta I’ve ever done, and only the third or fourth time I’ve been out on a boat, but I loved it.”

Australian entry Wasabi, owned by Bruce Mackay, was surprised by the standard of racing he was up against in the regatta, saying: “the boats up here, there are some genuinely fast boats. We didn’t realise – the first day we were like ‘where did everybody go?!’”

He was impressed with the experience of racing in the Bay of Islands though, saying: “We’ve been blown away by how nice the sailing is here. The Bay of Islands is such a great place, I would rate it better than the Whitsundays. The courses that you’ve got to choose are just brilliant, you’ve got such a variation. All the courses have been brilliant. I’d come back at the drop of a hat.”

This year’s regatta was marked by a big change in the number of boats competing in the Island Racing divisions, with many boats that would normally have competed in windward-leeward races opting for the longer passage racing courses instead.

First time entrant in the regatta Bruce Herbert, owner of Young Guns, put this down to the appeal of passage racing in such a scenic destination. He described the regatta as “amazing”, and went on to say: “The nice thing with the Bay Week is that you can come up here and cruise around the islands and take in the scenery. For us it seemed crazy to come all this way and do windward-leewards when you’ve got all the beautiful scenery. It’s a no brainer – it’s all about having some fun, and it’s been an absolutely fantastic experience to be honest.”

Auckland boat Anarchy would also normally sail windward-leewards, but this year it was more of a family occasion. Crew Will Reid explained why they opted to sail in Island Racing this year by saying: “It’s a holiday regatta. This is my eighth time doing it, but the first time I’ve done passage, and it’s pretty mean! If you look around, we’re in a pretty epic location, so we do one race a day, get a tour of the bay in the sun, go for a sail, but it’s still competitive.”

While over half the regatta fleet opted for longer passage races, the six TP52s in A Division saw more close racing in the third and final day. And while Viento dominated days one and two, today was Mayhem’s day, and she took the gun in all three races.

Owner of Mayhem, Harry Dodson, said: “We had a good day today. I think we’re still second overall, but everything went our way today. We had beautiful conditions today, really good, in fact there’s always good sailing. We’ll be back next year.”

Regatta organisers were also pleased with how the regatta went, and the feedback they received from competitors, on-water race officials and volunteers on a well organised and well run event. The regatta is run almost entirely by a committed crew of volunteers, who dedicate their time and energy to make it all run smoothly.

With over 100 boats taking part from as far afield as Taupo, Christchurch, Australia and New Caledonia, and over 1,000 sailors on the water each day, the Bay of Islands Sailing Week remains the biggest event of its kind in New Zealand, and according to many, the best as well.

Full results from the three days of racing, plus overall series winners, are available here.