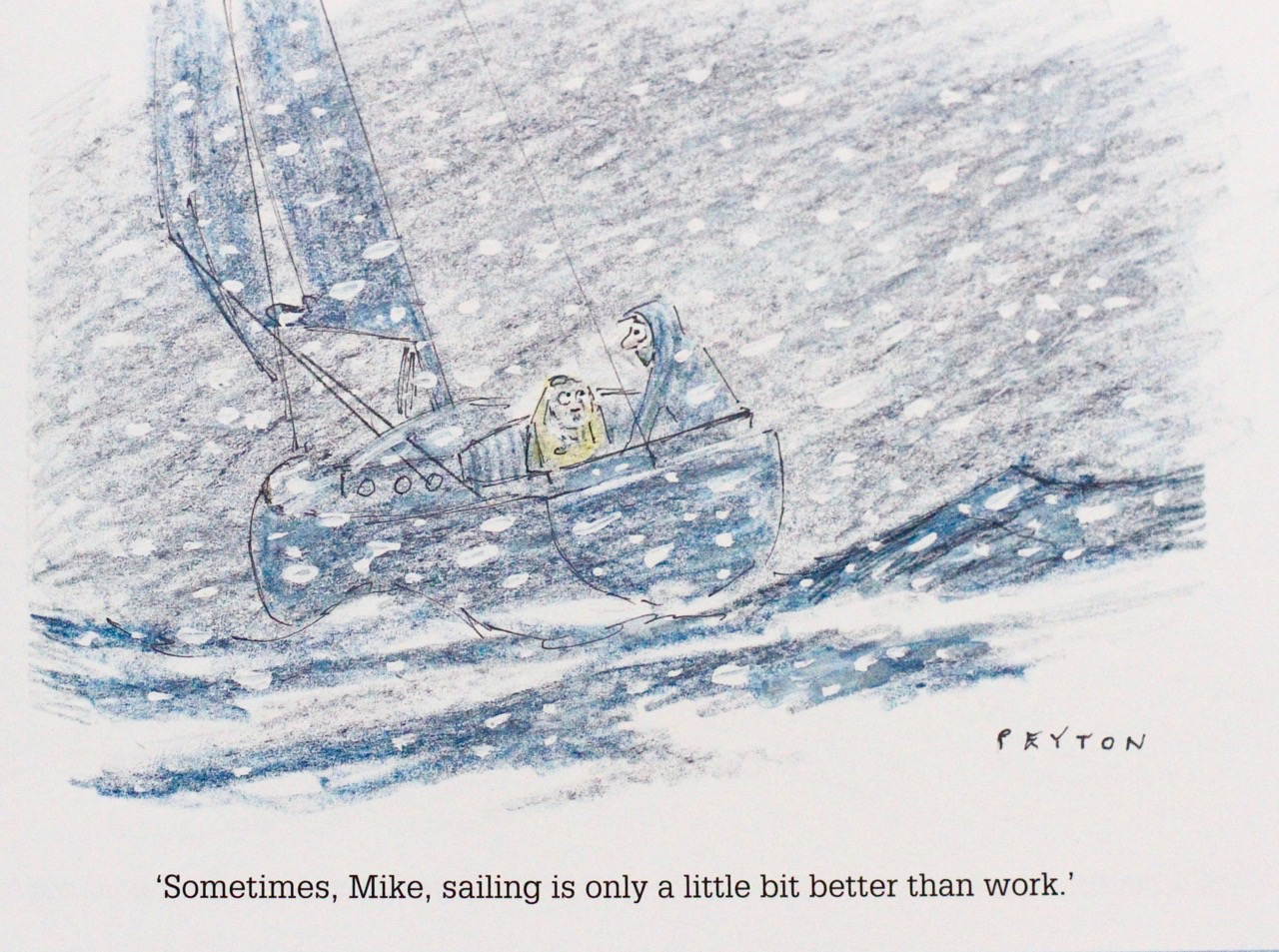 One of Mike's favourite cartoons from his Winter saiing collection.

Mike Peyton, dubbed “The World’s Greatest Yachting Cartoonist”, died yesterday (January 25) just five days after his 96th birthday. A modest, shy man, he eschewed the spotlight and seemed unaware of the esteem which in sailors all around the world held him.

Born into a mining family in County Durham in 1921, he lied about his age to join the Army and was seconded to draw maps of the North African desert by the Intelligence Corps during the Second World War. Despite escaping twice, he spent most of the war in a prisoner of war camp.

Mike began sketching as a boy, inspired by the graphics in 1930s British comics. After the war he went to Manchester Art School. He also discovered boating. He bought a 12ft canvas sailing canoe from a man in a pub and worked his way down the River Thames, sleeping on moored barges. He even persuaded his girl friend to elope for a honeymoon in a canoe. Kathleen, his widow, recalls her ‘essential’ wedding presents included a sleeping bag and walking boots.

Soon sailing became a passion as he learned about tides and how to reef sails. His first proper boat was called Vagrant  ‘because she had no visible means of support'.  In those days sailors wore peaked caps and ensigns were lowered at sunset. Naturally, Mike felt impelled to stick a pin in the balloon of pomposity of snooty sailors. He worked as a freelance cartoonist for New Scientist magazine for 35 years, as well as contributing cartoons to a wide range of magazines, from Yachting Monthly and Practical Boat Owner to the Church of England Times and Corsetry & Underwear. His cartoons, which often needed no translation, were published worldwide in yachting magazines from Japan to America.

With a few squiggly lines from his pen he took people to the heart and soul of sailing and sailing’s cock-ups.  He was a unique commentator on the sailing scene for more than 60 years. There was no other sailing cartoonist in the world to match his elegant, economical wit and wisdom. He said he got his best ideas sitting in the bath.

His humour was gentle, rather than vulgar, brash or cruel. As well as a superb draughtsman, he had a winning way with words, whether it was a clever punch line, a headline or a caption. He was a great storyteller – as anyone who sat beside the glowing coal stove on his boats can testify.

At the age of 90, failing eyesight meant Mike had to sell his last boat and stop drawing cartoons.  He had owned 13 boats and it became a standing joke that following his ferro-cement boats called Loadstone, Brimstone and Touchstone his next would be named be Tombstone!

He suffered macular degeneration, in which central vision is lost. For more than 30 years he drew the illustrations for Yachting Monthly’s famous ‘Confessional’ in which readers’ confessed their sailing sins and received an original Peyton cartoon for the best story.

Peyton had eighteen books of yachting cartoons published. He also published 'An Average War: Eighth Army to Red Army' about his in Second World War experiences, reviewed in the Spectator as 'a brilliant memoir'.

Last year, the Yachting Journalists’ Association presented him with a Lifetime Achievement award and dubbed him ‘the Picasso of sailing'. In 2011 The Royal Cruising Club awarded him a Medal for Services to Cruising in 2011 for ‘encouraging others to pick themselves up from near disaster and learn from their mistakes’.

Round the world sailor Sir Robin Knox-Johnston said: ‘Mike Peyton has been my favourite yachting cartoonist for decades. He has the knack of catching a situation we dread and then poking fun at the reaction.”

Mike Peyton, who lived near North Fambridge in Essex, is survived by his wife Kathleen and daughters Hilary and Veronica.