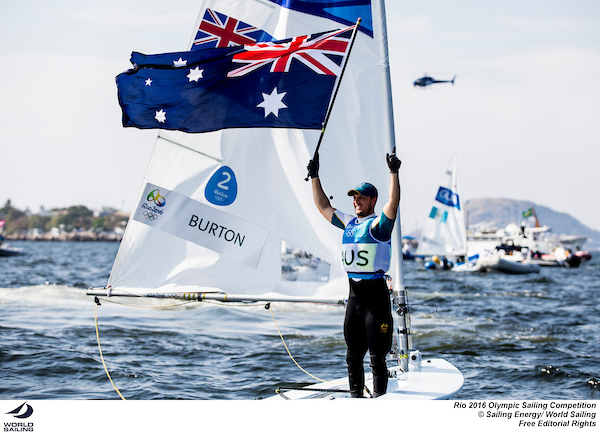 The annual Australia Day Honours have recognised members of the sailing community for their contribution and achievements and Australian Sailing organisation congratulates them on their Awards.

Rio 2016 Sailing Gold Medallist, Tom Burton has been recognised with a Medal of the Order of Australia (OAM) in this year’s Australia Day Honours List.  Burton, who won Gold in the Laser Class in Rio, sailed the race of his life to pull off a stunning victory on the final day of racing.  Since his Olympic victory, which inspired a host of aspiring would-be young Olympians, Burton has dedicated a great deal of time to visiting schools, sailing clubs and community groups to share the stories of his success. Perhaps one of his most humbling experiences was a day spent with young cancer sufferers and their families at Camp Quality in October.

“The experiences I’ve had since winning Gold have been quite incredible,” said Burton.  “I love being able to share my story, especially with kids, and it’s great to see how excited and inspired they become.  I’m very honoured and proud to be recognised with an OAM.”

Also honoured with an OAM were our Paralympic Gold Medallists in the Sonar class. Colin Harrison, Jonathan Harris and Russell Boaden following their stunning Gold Medal winning result in Rio, which saw them secure the Gold with a race to spare.  The inspirational sailors join SKUD 18 Gold Medallists, Daniel Fitzgibbon OAM and Liesl Tesch AM who were recognised with Australia Day Honours in 2014.

Campbell Rose has been recognised as a Member (AM) in the General Division of the Order of Australia for significant services to sports administration, to infrastructure and transport development and to the community of Victoria.

On-water, Campbell was a member of the Australian Yachting Team at the Seoul Olympics in 1988 and at the Goodwill Games in 1986. He was a Board Member of the Australian Yachting Federation from 1995-2005 and Victorian State Boating Council from 1991-1999; Executive Director of the Victorian Yachting Council from 1990-1994 and Member of the Marine Board of Victoria from 1991-1999. Campbell has also been involved with the Victorian Olympic Council, Western Bulldogs Football Club, Goodwill Games, Melbourne 2006 Commonwealth Games bid and Melbourne Major Events Company, as well as many other business and charitable organisations.

John Ferguson has been honoured with a Medal (OAM) in the Order of Australia in the General Division for service to sailing, and to the community.

John has had a long association with Royal Queensland Yacht Squadron as a member since 1957 and holding a number of positions including Commodore from 1992-1994 and Yachtsman of the Year in 1985.  He was a member of the Australian Olympic Team in 1968, 1976 and 1980 and the Team Manager for Yachting at the 1984 and 1988 Olympics.

John has also had a long connection with the community and business with University of Queensland Press and Fergie’s Print and Mail.

Lindsay May has been honoured with a Medal (OAM) in the Order of Australia in the General Division for service to sailing and to health and social welfare groups.

Lindsay is a skipper and navigator who has sailed in national and international ocean races including 44 consecutive Sydney to Hobart Yacht races, since 1973; represented NSW in the Southern Cross Cup in 1979, 1985 and 1993; represented Australia at the Admirals Cup 1983 and member of the Cruising Yacht Club of Australia since 1984.

Lindsay has also contributed to many organisations including Rotary, Salvation Army and the Prostate Cancer Foundation for many years.

Ralph Stilgoe has been recognised with a Medal (OAM) in the Order of Australia in the General Division for service to sailing and to the community.

We also congratulate Office Bearers and members of our Clubs who have been recognised including;

Noel Cornish has been recognised as a Member (AM) in the General Division of the Order of Australia for significant service to business as an advocate for industry policy and development to tertiary education administration and to the community.

Noel has been a Director of the Cruising Yacht Club of Australia since 2013 and current Chairman of the Sailing Committee, as well as a member since 2002.

Rear Admiral Stuart Mayer CSC and Bar RAN, NSW has been recognised as an Officer (AO) in the Military Division of the Order of Australia for distinguished service to the Royal Australian Navy principally in key command roles.

Rear Admiral Mayer has distinguished himself through his selfless devotion to duty and outstanding achievement in promoting operational professionalism within the Royal Australian Navy.  He also enjoys sailing and is involved with the Australian National Maritime Museum and Australia Day Regatta.