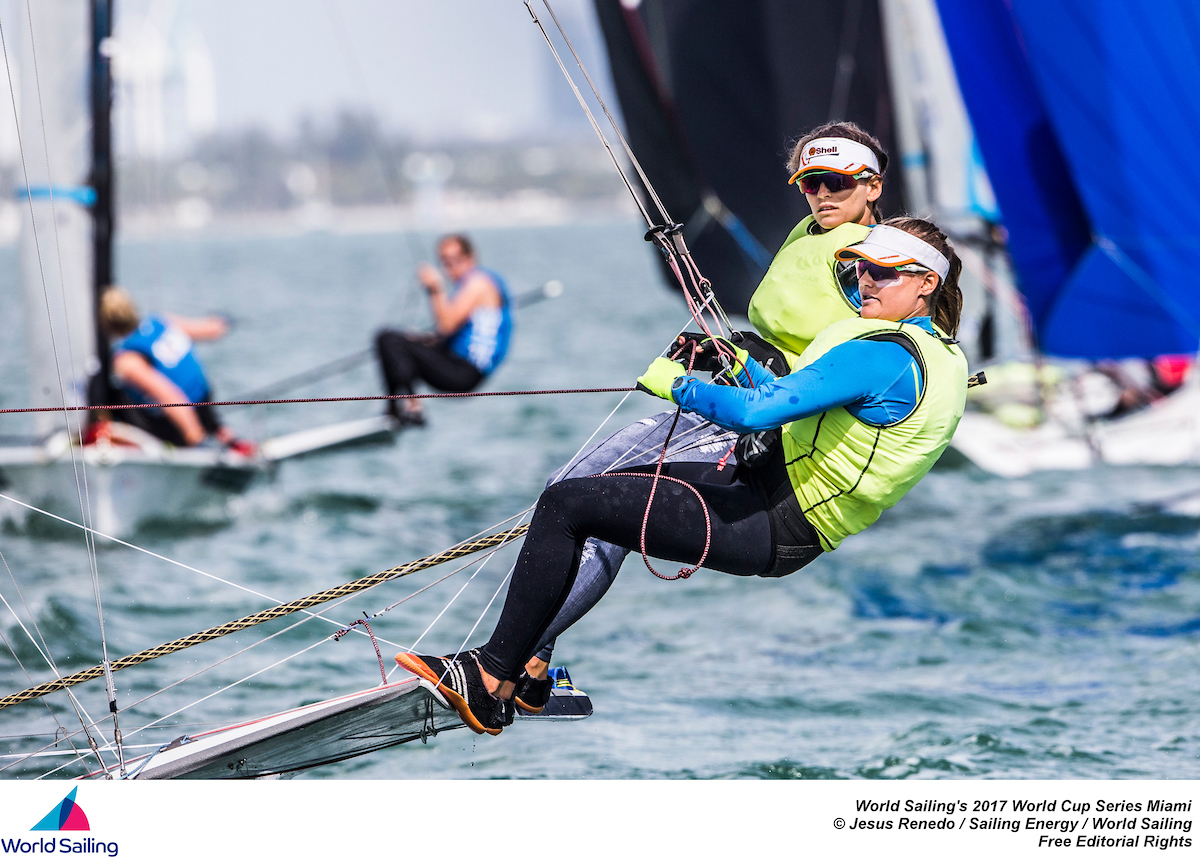 For Brazil's Martine Soffiati Grael and Kahena Kunze, the fourth day of the 2017 World Cup Series Miami presented by Sunbrella started on a sour note, with a 14th in a 16-boat 49erFX fleet.

“It was crazy,” said Kunze when asked about the wind in the first race. “It was going to the left and to the right, changing all the time.”

But even that result wasn't enough to dampen either the spirits of the resilient Brazilian duo or their chances of winning the 49erFX division in this regatta for the first time since 2013, when the class was so new that just nine teams competed.

A slight change of venue and the filling of a southeasterly sea breeze before the second race were welcome changes for Grael and Kunze. They finished fourth and second in the day's final two races. They will start Saturday's Medal Race with a nearly insurmountable 17-point lead over second place.

The only way that the second place team in the 49erFX, Norway's Ragna and Maia Agerup, could take over the lead in the double-points Medal Race would be if Grael and Kunze finished last and the Norwegian pair finished first.

The most interesting battle during the Medal Race is likely to be for the lesser podium places. Victoria Travascio and Maria Branz (ARG) are in third, just five points behind second with another Norwegian pair, Helen Naess and Marie Ronningen, three points further back in fourth.

Travascio and Branz had their best day of the regatta to move into contention. They finished seventh in the first race and won the next two.

“The racecourse was really [strong] on the left, so it was crucial to have a good start and have a good lane to go to the left,” said Branz.

Like his countrywomen, Brazilian Finn sailor Jorge Zarif struggled in the first race of the day. “It was really hard because we had a very light breeze,” said Zarif, who won this regatta last year and then experienced the heartbreak of a fourth in his home-country Rio 2016 Olympic Games. “The wind was shifting a lot, a lot of differences in pressure. I had a good start and I didn't find a good gap. I tried the left of the racecourse and it didn't work and it was really hard to pass someone in the downwind. I had a yellow flag [for a kinetics violation] and if I got a second I had to retire from the race so I was really calm trying to not get a second yellow flag.”

But just like Grael and Kunze, he too was able to rebound, recording his fifth win in eight races in the day's second contest and building a 12-point lead over Ben Cornish (GBR), who sits second. The Finns, along with the 470s, Lasers and Radials, will continue full-fleet racing on day five and have their Medal Races on Sunday.

The Nacra 17 fleet made the most of an early breeze and cranked through four races to complete its opening series. Ben Saxton and Nicola Groves (GBR) left no doubt who is the class act of this fleet recording three firsts and a second. They start the Medal Race with a nine-point lead over Tom Phipps and Nicola Boniface (GBR). Nico Delle-Karth and Laura Schöfegger (AUT) are third, eight points further back. The Italian team of Lorenzo Bressani and Caterina Marianna Banti are fourth and in contention for bronze, though it will take a lot of help. Riley Gibbs and Louise Chafee (USA) and John Gimson and Anna Burnet (GBR) are tied on points for fifth, but out of medal contention, provided the Austrian team finishes the race.

Consistency was a struggle across the 51-boat Laser Radial fleet. Just one sailor, Mathilde de Karangat (FRA) strung together two top-10 finishes. She is now just four points ahead of second, currently held by Belgium's Evi Van Acker. Vasileia Karachaliou (GRE) had a fifth and a 14th from the day and with 23 points through 8 races, holds a 16-point lead over Van Acker.

Dylan Fletcher-Scott and Stuart Bithell's lead in the 49er took a significant hit in the last two races of the opening series with a 16th and 20th. But nonetheless, their 21-point margin over second means the British pair will start the Medal Race guaranteed a regatta win. The battle for silver and bronze comes down to Carl Sylvan and Marcus Anjemark (SWE), with 71 points, Benjamin Bildstein and David Hussl (AUT), with 72 points and Diego Botin and Iago Lòpez Marra (ESP), with 77 points. Yago and Klaus Lange (ARG) and Lucas Rual and Emile Amoros (FRA) have outside chances at a medal.

Jean Baptiste Bernaz's streak of race wins in the Laser came to an end earlier in the day. He finished sixth and 17th in the two races. But with everyone else in the top 10 struggling mightily, the French sailor's lead is now 32 points over Pavlos Kontides (CYP) in second.

France's Louis Giard closed the full-fleet portion of the Men's RS:X regatta with a remarkable run of five straight top-two finishes. His reward is an unassailable 33-point lead over Kiran Badloe (NED) in second heading into the final race. Badloe, with 66 points, will go into the Medal Race looking to defend his silver position against Pierre Le Coq (FRA) and Mateo Sanz Lanz (SUI), who are one and eight points back respectively.

With a fifth, first and second, Marina Alabau Neira (ESP) did everything she could to put herself into position to challenge for first place in the Women's RS:X Medal Race. She'll need to make up 14 points to take the gold from Yunxiu Lu (CHN). Isobel Hamilton (GBR), Manjia Zheng (CHN) and Jiao Ma (CHN) are separated by just four points in what is likely to be the battle for bronze.

The 470s fell victim to the dying breeze, getting just one race in very light conditions. In the Women's 470, a win by Afrodite Zegers and Anneloes van Veen (NED) pushed them into the overall lead with Sophie Weguelin and Eilidh McIntyre (GBR) in second, three points back.

Stu McNay and David Hughes' steady march to the top peaked today as a fifth place in a very light-air race lifted the American team to the top of the Men's 470 fleet. With 25 points, they are four points ahead of Panagiotis Mantis and Pavlos Kagialis (GRE) and nine points clear of Tetsuya Isozaki and Akira Takayanagi (JPN).

The Medal Races for the 2017 World Cup Series will be broadcast live via World Sailing's YouTube channel starting at 12:00 local time and shown on a big screen at Regatta Park in Coconut Grove. Admission to the park is free and food trucks will be on hand to ensure sailing fans don't go hungry.