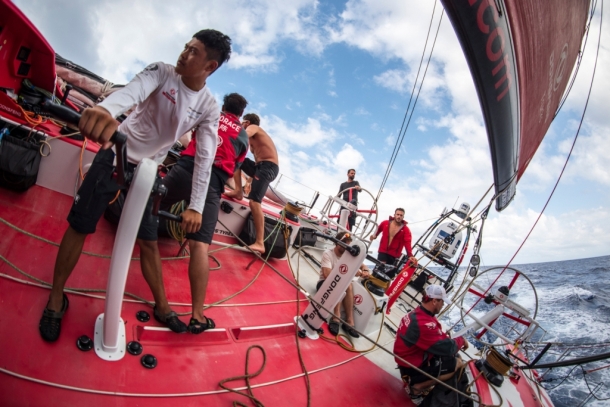 There are 268 days until the Volvo Ocean Race fleet departs Alicante ahead of a 45,000 nautical mile marathon through the most challenging oceans on the planet, and Dongfeng Race Team are set to make the most of that preparation time after becoming the first to take delivery of their newly-refitted Volvo Ocean 65 at The Boatyard in Lisbon today.

The handover marks the formal beginning of the Chinese team’s second consecutive campaign, and holds extra special significance as it is exactly two years to the day since Charles Caudrelier and Dongfeng Race Team won their 2014-15 homecoming leg into Sanya.

Having been through a re-fit process worth around one million euros, the boat now features an eye-catching new colour scheme and branding, alongside a range of upgraded kit consisting of over 500 items across sails, deck gear, electronics and a new media and navigation station.

“For us, today is the largest milestone we’ve had so far in there-fit period. It’s 15 weeks since Dongfeng gave the boat to us, and the deadline for returning it is today,” explains Neil Cox, Paint and Commissioning Manager at the Boatyard.

“We’ve had two days of sea trials which have gone well, and that’s the culmination of an enormous amount of work by 25 to 35 people, who have worked the last three and a half months putting in close to 3,500 man hours into the boat, covering everything from boatbuilding, rigging, to electronics, and sails, to get it stripped and put it back together.”

He continues: “In addition to that, we’ve put an additional 2,500 man hours into painting and branding, which has pretty much seen every area of the boat – from the hull, deck, masts, keel, rudders and daggerboards – stripped, re-primed and brought back into new paint, so we’re giving back a product which looks like a brand new boat.”

And Dongfeng technical specialists were full of praise for the Boatyard team, who have given the boat a complete overhaul whilst under huge time pressure.

“We have our boat back and she is still the same one that we got to know last time,” said boat captain, Graham Tourell. “But really she is almost new with some innovative upgrades – everything has been either replaced or renewed and she looks stunning in her new livery.’

Dongfeng skipper Charles has been working for months to build his crew for a campaign which he hopes will see the team better their third place of 2014-15, and the handover of the boat is a landmark occasion, he says.

“Getting our hands on the boat today is another huge step for us. It marks the beginning of another adventure for our team and the moment that we start our training programme in earnest. In the next few weeks we will also be able to finalise our crew selection.”

Who will sail onboard Dongfeng is not yet confirmed, but the Frenchman revealed that his squad will once again feature a mixed Chinese and western crew and will take advantage of new rules designed to encourage female sailors to take part.

“We’re looking for people who are competitive, determined to succeed and committed to our cause,” said Caudrelier. “Competition for each slot on the boat is exceptionally tough but we are determined to take our time and make sure we have the right mix.”

With the main phase of boat preparation now completed the focus switches to Dongfeng Race Team’s on-the-water training and racing programme in the lead-up to the Volvo Ocean Race start from Alicante in Spain on 22 October.

The 2017-18 route will see the Volvo Ocean 65 fleet race more than three times as many Southern Ocean miles as in recent editions, visiting 12 landmark cities across approximately 45,000 nautical miles – including a first return to Melbourne, Australia in over a decade, as announced on Thursday – and Caudrelier can’t wait to test the boat against the toughest conditions on the planet.

“As a team, we’re relishing the new emphasis in the 2017-18 Volvo Ocean Race on racing in the Southern Ocean and leg three is going to be one of the biggest challenges we will face,” he added.