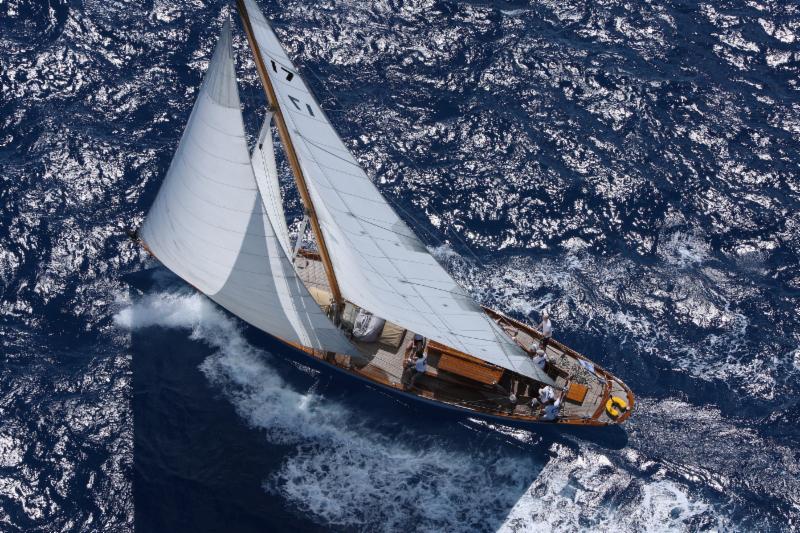 Bridgetown, Barbados (17 January, 2016): The Mount Gay Round Barbados Series organised by Barbados Cruising Club in association with Barbados Tourism Marketing Inc, and Mount Gay got off to a spectacular start today with the first race of the three-day Coastal Series blessed with glorious sailing conditions.

A good 17-20kts of north-easterly breeze and relatively flat seas resulted in exciting close racing for the five fleets, which ranged from Windsurfers and Foiling International Moths, Cruising classes, to the CSA Racing class.

Today’s courses, which all started in Carlisle Bay took the fleets generally out to the south-east, round South Point to Tapas, a mark just off the beach up the east coast. The relatively short opening blast was just the right length, although those on the most physically demanding boats such as Andy Budgen on his foiling Moth Nano Project, and Charles Trevor Hunte on his windsurfer did confess to feeling somewhat fatigued.

Commenting as he stepped ashore after his first race win, Budgen said: “The second half was actually quite bumpy, which meant it was extremely demanding. I started to feel tired half an hour in, and consequently had a few splashes. It has however, made me realise I definitely need a support boat for the Round Barbados Race on Saturday because it is going to be tough.”

Charles Trevor Hunt on his Phantom Batwing Windsurfer, who broke the Round Barbados record last year was beaten by Budgen today. He said it was a great opportunity to iron out all the kinks: “I bust two foot straps… I know it sounds a bit like ‘the dog eat my homework’ and I hate to blame the dogs but I think they have chewed through my foot straps. Apart from the foot strap issue, the board is working well, but I am a little rusty so I am guessing by Saturday I’ll be either dead or ready.”

Having corrected their navigational error when they missed out a mark, Peter Steinkogler and his Austrian team on Godspeed (X41), worked well in the second half of the race to make up enough time to finish third overall.

The Non CSA class was noted today, for its impressive performance particularly aboard Jonathan Gittens’ yacht Shangri La (Morgan 41). This team was first off the start line and led by over a minute at the first mark of the course. They continued to sail smart throughout the race, but Mark Hioens and team on the USA registered boat Tropic Bird (Hunter 35) also sailed a good course and clinched the win on corrected time by six minutes.

Today’s opening race in the Multihull class lived up to its close race expectations with Bryn Palmer on Silver Bullet battling it out with Jack Trigger, Oliver Mellor, John Hunter-Hamilton, and Victoria Akhurst on  Concise 12 (Diam 24). The pair was neck and neck for the majority of the race but Team Concise suffered with poor boatspeed in the closing stages of the race, which gave Palmer (Barbados Cruising Club Commodore) and team on Silver Bullet the opportunity to take the first win of the series.

Commenting on their issue with boatspeed, Trigger from Concise 12, explained: “We actually didn’t realise the problem until we pulled the boat ashore and discovered there was about half a tank full of water, which didn’t help our race result, but at least we knew what the problem was. We think it is the seal on the aft hatch, which is a bit annoying. We did, however, really enjoy the close racing with Silver Bullet and I think we are well matched in today’s conditions, so we’re looking forward to getting out there again tomorrow.”

Although The Blue Peter suffered gear problems when the tack of her jib blew out on the third leg, she recovered well and her team – Barker, Kate Moore (first mate), and a bunch of lads, mainly from Derby – clinched the overall win. Barker commented:  “The gear failure slowed us down a bit because we put a jury rig in place to get us back on track. It was however, glorious with a lot of north in the wind, which will be nice for the round Barbados race.

Barker a regular at this regatta, commenting on what attracts him to the regatta concluded: “The conditions here in Barbados are fantastic for racing with flat water and usually a pretty good breeze, which makes for exciting yet manageable racing. As well as being a wonderful island, the people who run the Cruising Club and the organisers in general always make us feel very welcome.”

Looking ahead to the second race in the three-race Coastal Series (17-19 January), the forecast is for similar conditions as today, possibly a bit lighter from the east-north-east.

As the racing progresses in the Coastal Series, more and more yachts are making their way to Bridgetown in preparation for Saturday’s Mount Gay Round Barbados Race, including Adix, the stunning Arthur Holgate 65m classic, which is currently en-route from St Martin.