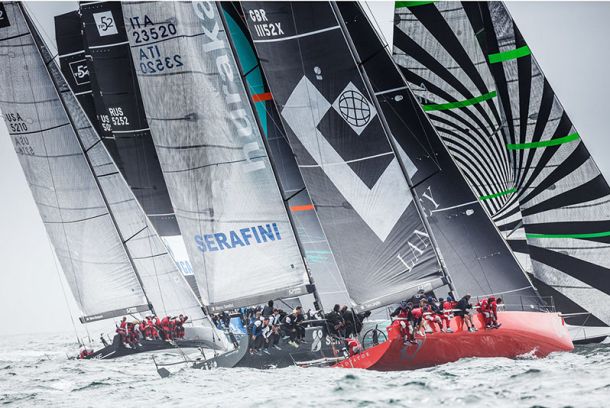 An unsettled, breezy start to the Cascais Cup, the finale of the 2015 52 SUPER SERIES seems to be on the cards. There was something of a foretaste today when the fleet warmed up in sizeable waves and a moderately fresh wind for the official practice race. Strong winds are forecast to pass over the race area overnight but most teams are still anticipating racing in over 20kts for the first windward-leeward contests on the Atlantic on Tuesday.

Azzurra, 52 SUPER SERIES leaders, proved they are on track when they raced around the course in second place. But like practice race leaders Platoon they had been closed out on the start line and so did not finish across the line, leaving Takashi Okura’s Sled to claim the winning gun.

Although most of the top pro sailors have been to Cascais many times the no-stone-unturned approach means many of the top Portuguese Olympians have been called into service. Star Olympian, Bacardi Cup winner and former Bigamist TP52 skipper Afonso Domingos is supporting Platoon, Hugo Rocha and Paulo Manso are with the Italian Hurakan team. But as Platoon’s German tactician Markus Wieser of Platoon warned again, starting well and sailing cleanly are much more fundamental to success than any local specifics. And in the big winds big wins are quite probable:

“The race winner is always good at the start. If we have a good start we can hold our lane and if you hold your lane you can decide which side you want to go with. Like today we were leading on the upwind marker and got clear. But if you are locked with other boats you end up losing your angles anyway. If you can sail your angles downwind in the breeze and the waves you can open distance. If you are in front it looks easy but if you are behind you don’t know what is going on. When it’s windy the margins will be quite big.” Said Wieser on the dock in the Marina de Cascais

Behind the scenes final preparations and testing was under way for the 52 SUPER SERIES moving to full live coverage broadcast from the water during racing on Friday, Saturday and Sunday. Integrated with the 52 SUPER SERIES new mobile application – developed by Virtual Eye – subscribers will be able to follow all the racing move by move, mark by mark, via the application which is available from Google Play store for Android users and for Apple users from the iTunes site.