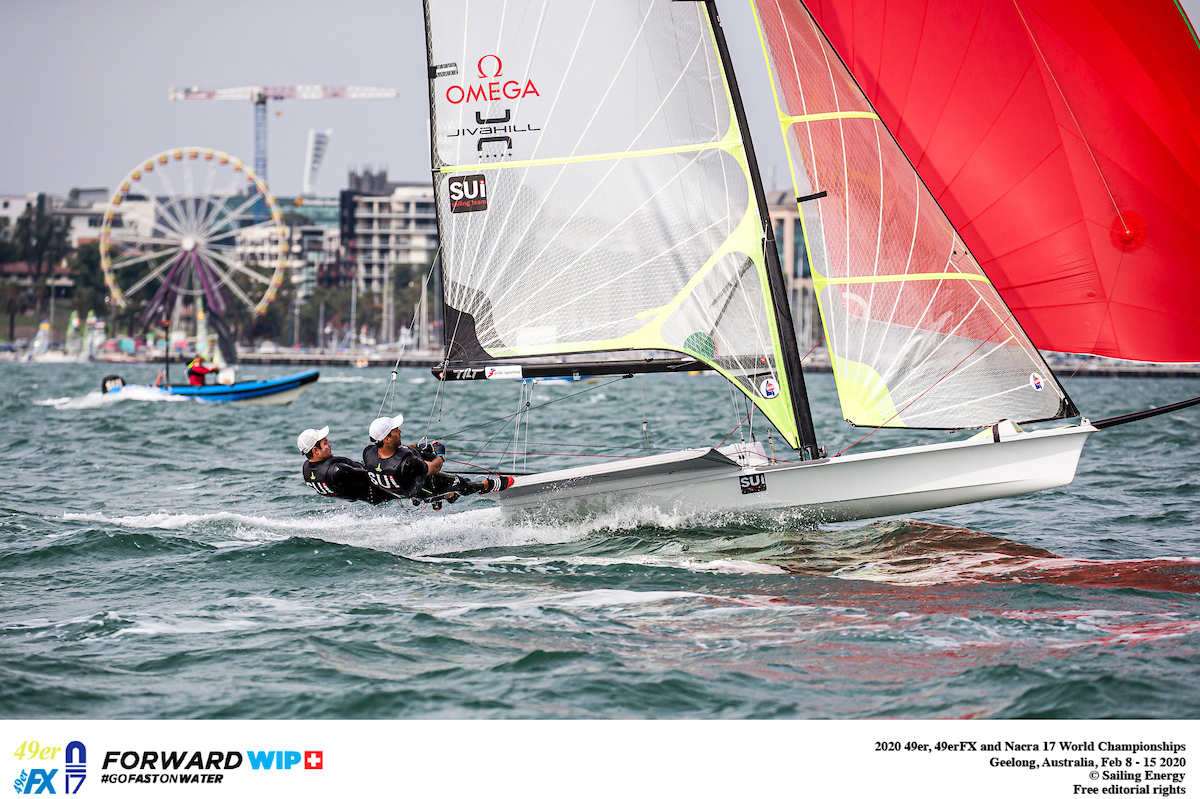 49ers preparing for the World Championships at Geelong.

Half the contenders vying for an Olympic spot know they’ve made the cut and the other half are still aiming for selection, adding extra strain to the make-or-break 49er, 49erFX and Nacra 17 World Championship, the last major class title before Tokyo 2020.

Big news on the eve of racing is that New Zealand’s Rio 2016 silver medalists Alexandra Maloney and Molly Meech have withdrawn from the 49erFX fleet due to Maloney fracturing her foot when she fell awkwardly during training on Saturday February 9. The pair qualified New Zealand for the Olympic Games 49erFX spot and finished the top-ranked Kiwi team at the last world championship in Auckland. New Zealand is yet to name its Olympic sailing team.

“We didn't think it was too bad at first,” coach Nathan Handley said. “She came in and iced it and we thought it was just bruised but later on as it was still hurting we got some x-rays and found out there's a fracture in the foot.

“The girls are devastated, obviously, being so close to the world championships and having this sort of injury. They were in really good shape. Everything was going well. They were sailing well, the boat was going well and we definitely thought we had a good shot at the podium here in Geelong.”
.
Fresh winds are set to continue for at least the first of three qualifying race days beginning off Victoria’s Royal Geelong Yacht Club on Monday February 10. The second three days for the skiffs constitute their final series while the Nacra 17s will race a single series. All up 160 teams will represent 32 nations.

Host nation Australia is fielding the biggest contingent of 25 teams across the three classes and neighbour New Zealand is second, with 14 teams. The largest team outside the locals is France, a sign of the country gearing up to stage Paris 2024.

Spaniards Diego Botin and Iago Lopez Marra need to shore-up 49er country qualification for Tokyo at this summer world championship. Their dominant win at the warm-up Oceania Championship sailed in breezy conditions January 30 – February 3 is a terrific boost to their chances.

On the flipside Great Britain’s three Olympic representatives – Nacra 17 team of John Gimson and Anna Burnett, 49er team of Dylan Fletcher and Stuart Bithell and 49erFX team of Charlotte Dobson and Saskia Tidey – can enjoy the best of Geelong’s Corio Bay and the competition, minus the pressure of trials. A chance to further hone against the strongest fleet in the world five months out from the Games.

Worlds host nation Australia has named two Tokyo 2020 selections, Mat Belcher and Will Ryan in the 470 class and Matt Wearn in the Laser. In the Nacra 17, cousins Jason Waterhouse and Lisa Darmanin, bronze medallists at the 2019 World Championship in Auckland two months ago, and siblings Nathan and Haylee Outteridge are front-runners for the prized country place.

Waterhouse said, “The breeze has been very shifty of late, so this will make it ‘game on’ the whole way. Consistency will reign supreme, even if it is hard to find. The boat is all sorted and tested, and we have been working with different sails for flat water.”

Mixed results at recent Australia’s 49er men’s titles makes guessing which way the selectors will go impossible. Best performance at the last world championship came from Will and Sam Phillips in 15th then at the recent 2020 Oceania Championship Thomas Needham and Joel Turner beat the pair, showing there’s no single standout.

Bekkering/Duetz have the runs on the board to record a triple world crown at this second and final event of the ‘Down Under’ series that included last December’s 2019 Hyundai World Championship in Auckland.
Giulia Conti gives us a Worlds preview

First warning on Monday February 10 is at 1055hrs and the forecast for Western Port Phillip is easterly 15-25 knots reaching up to 30 knots early in the morning then winds turning south-easterly 15-20 knots in the evening. Tuesday’s forecast indicates a winding back, variable 10 knot breezes becoming south-westerly 10 to 15 knots during the afternoon then decreasing to about 10 knots during the evening.

Royal Geelong Yacht Club is host of the 49er, 49erFX and Nacra 17 2020 World Championship along with six other major events that fall under the club’s ‘Summer of Sailing’ calendar rolling out between January and March.

Results:
Results will be posted race by race, as they happen.

Live Tracking will be available for all fleets each day via https://49er.org/event/2020-world-championship/