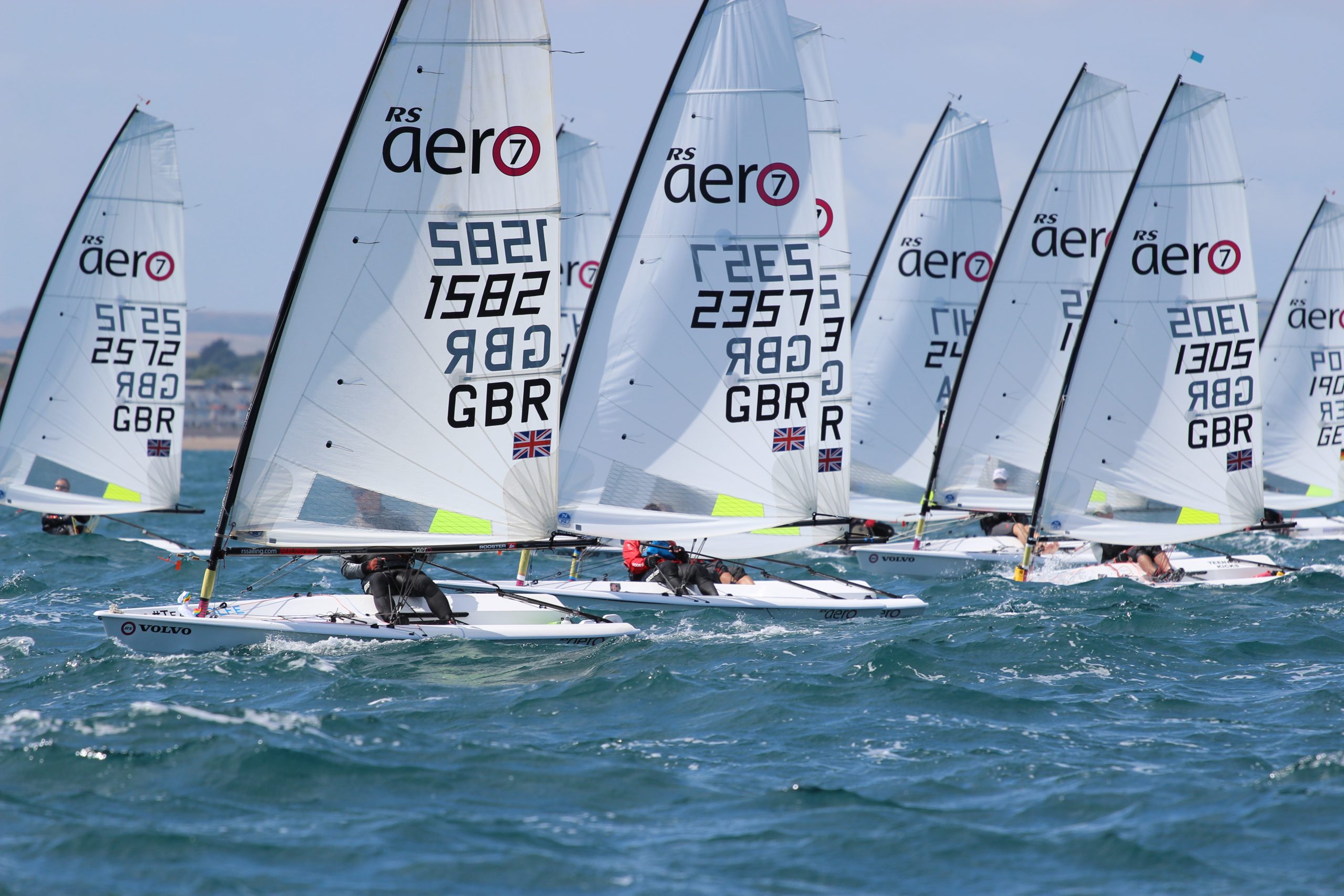 Wow, another big day out on the Bay! Yesterday was a long day and today was very physical with another 3 races out on Weymouth Bay. Strong winds kicked up some exciting waves to power through upwind and surf on back downwind rewarding the bold. 205 RS Aeros returned to shore exhausted and beaming from an exciting day on the water!

Another long day of strong winds and the RS Aero 9s had plenty excitement with a recalled U flag followed by a recalled black flag (three unlucky sailors scoring BFD). However, nothing fazed Marc Jacobi who is laying down an impressive number of first places. Sadly your correspondent was too far back to see what was happening at the front. Just keeping the pointy bit above the hull was a real challenge with some really strong gusts and a confused building sea. Downwind it was all to easy to capsize or to bury the bow whilst the bold were rewarded by making large gains weaving down the waves. The brown bits in the boat were chocolate crumbs but some of those runs were down right scary. On the reach the speed and fun was amazing, bouncing from wave to wave.

After race three tiredness was taking its toll and sailors returned ashore to claim the welcome beer (courtesy of Charlie’s 18th today!) and pasta for handing in their tally.

After 2 days of building breeze we were fully put to the test today with a little more wind than we bargained for.  This created a real test to those new or unfamiliar with the RS Aero but also provided some fast and exhilarating sailing.

Sam Whaley won races 6, 7 and 8 in the yellow fleet and described the day as a “great one for cruising around the course”. Most other sailors commented on the downwind being more cheek clenching with the increasing wind and the challenge of large waves coming from the south west.

In the blue fleet the love was shared with 3 separate winners in each of the races; Jack Hopkins, Steve Cockerill & Alastair Goodwin.  One of the amusing places on the course was at the final gybe mark before the finish where there was a collection of upturned hulls representing the various nations, along with collection of Selden sponsored floating water bottles.  Fortunately the safety teams were all environmentalists and were able to pick these up and bring them back to shore for sailors to collect.

It was great see smiling faces back on shore after 3 gruelling races.  However it seems apres sailing may well be a more muted affair this evening.  Hopefully the aching bodies will be recovered for tomorrow’s races.

And relax…..what a day for the 60 odd RS Aero 5 sailors! We knew it was going to be a big day when the trip out to the course that took 1hr 20 yesterday, took 20 minutes today! Big wind and big waves were to be the story of the day.

The first race was dominated by Will Caiger who took another bullet to add to his collection. Second was held by Kate Sargent. Jack Hardie pushed a long way left on the second beat which helped him gain a solid third place.

Race two and the breeze kicked in and the bigger sailors began to dominate. Steve Stewart was heard saying “I was suddenly in front and realised I needed to get my bum over the edge for any lurking photographers!” Andrew Frost started at the pin end of the start and held the race from there taking a low and fast approach with Liina Kolk of Estonia taking second and Toby scoring his best result of the day in 3rd.

The third race was even breezier. Will Caiger was very unlucky with an exploded kicker so had to retire and take his discard race. Liina Kolk dominated the last race in the big wind bashing out a first.

After the long grind home the combination of hot pasta and doughnuts re energised the sailors! Looking forward to pizza and cider social this evening to carb stack before another breezy day tomorrow!

Tomorrow we are set for another three races out on Weymouth Bay and it is the first day of Gold & Silver fleet racing for the RS Aero 7s.

In the evening the Australian RS Aero Class will present the 3rd RS Aero World Championship to be held at stunning Port Stephens, NSW in December 2019. A Karaoke sing-off between the RS Aero and RS Tera fleets will follow!