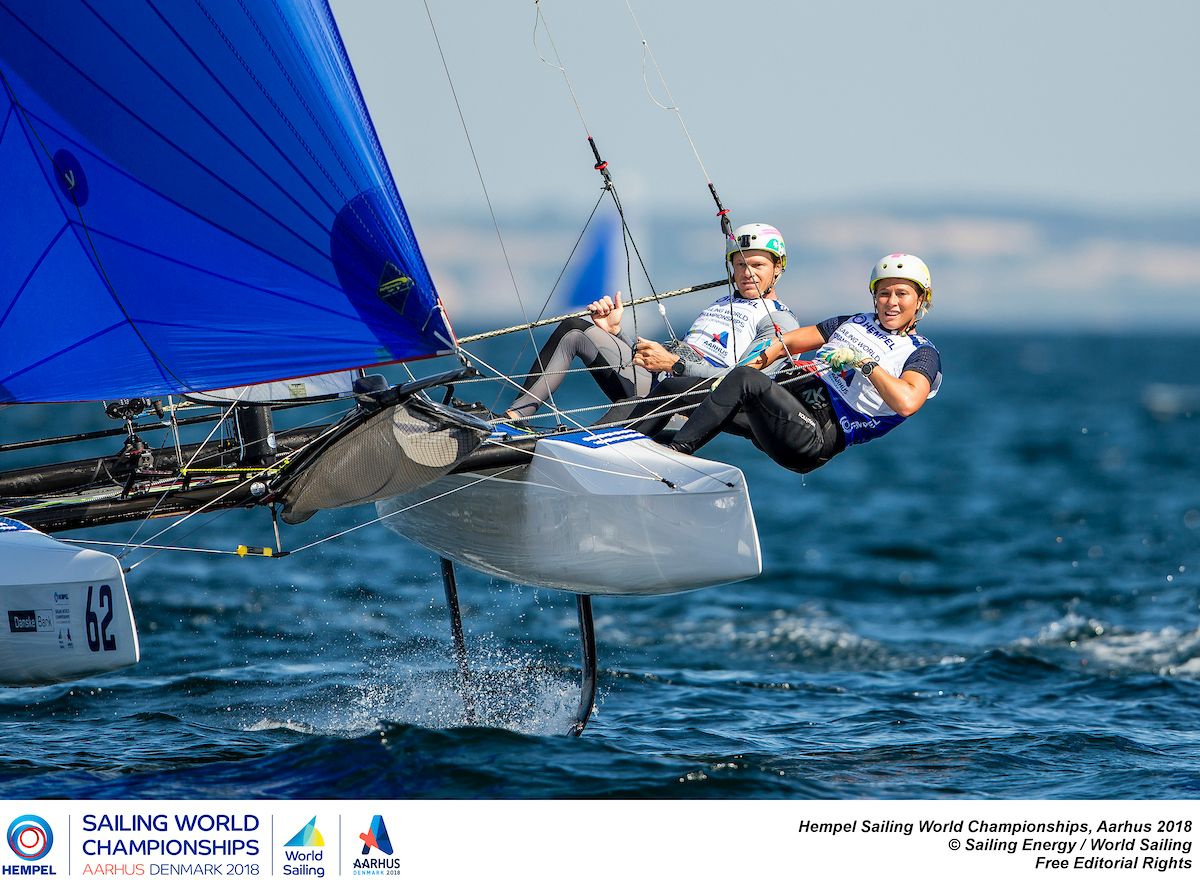 How does the youngest child reassure their worried mother? Tell her that she's with her big brother. It is a domestic scene played out around the world and elite sailing is no different, even when you are talking about the most famous family partnership in the Hempel Sailing World Championships Aarhus 2018 boat park – Australia's Team Outteridge.

Of course, it helps when big brother is Nathan Outteridge, Olympic gold medallist and America's Cup sailor and little sister, is Haylee Outteridge, an Olympic-class sailor on the rise. But their chosen boat to unite in – the Nacra 17 – a 17th foiling cat, is a new and evolving Olympic class boat that is widely recognised as the toughest in the fleet.

“It's really cool because we haven't sailed together since I was five,” Haylee, 27, says of her arrival in the Nacra with her brother Nathan, 32, the London 2012 gold medallist and Rio 2016 Olympic silver medallist, who skippered Artemis's challenge in the last two America's Cup campaigns. Sailing has always been a family affair – this World Championships is full of siblings racing together or in different classes and the Outteridges are the newest addition to the firm.

“It's nice to be working the boat out together. We get along very well – he's always been my mentor. I feel very lucky to be out there with him. He's got such experience in those conditions. Mum worries a bit because it's dangerous, so, if there's an event and the wind is up I send her text saying I'm on the safest boat.”

Safety is relative though and for Haylee, normally a helm, it has involved getting to grips with being crew.

“In fact this is the first time she's been crew in any event,” Nathan says. “But it became evident quite quickly that I'm really terrible at crewing and my skills lie in driving. Being the crew is a much more physically demanding and it makes sense to let the bigger person do it. (Laughing) You know what they say: never do a bad job well.

“We considered me driving downwind – because I've got the foiling experience -and Haylee driving upwind, when you're not foiling. As far as we could see there's nothing in the rules to stop that.

“But the bigger person is inevitably better as crew. For Haylee that literally means more bumps and bruises because the boats don't foil very well when the water isn't flat. When it has crashed, they (the crew) get thrown around a bit.”

And have there been any crashes?

“We've had a few,” Haylee says. “As crew you can get thrown around, he's just happy at the back in his footstrap. At the Europeans (in Gdynia, Poland in July) I went in (the water) and got hit by the rudder as I went under the boat. We were lucky, it could have been a lot worse.

“I wouldn't say I relished it (being crew) on my first go. But we're not silly, Nathan has these skills and we need to take advantage of them.”

Haylee has not sailed with Nathan since she was five and it is strange seeing him and his partner for almost a decade, Iain “Goobs” Jensen at the same regatta but not in the same boat.

“It is quite strange,” Nathan says. “He and I have sailed together every time since 2009. He got a great opportunity and good for him. I don't want to speak for him but I think he's sailing here because Sam Phillips broke his foot in March and Goobs and Will get on very well.”

There are seven Australia Nacra crews in Aarhus and for now they are pooling all of their considerable experience.

“It's so cool to be working with everyone from such different backgrounds who have done so many amazing things,” Haylee says. “You come away with your head spinning in the most productive way. It's more of a collaboration. Obviously, everyone wants to go to the Olympics and win a medal. So things will shift. But right now everyone is working together.

“Everyone has different strengths and weaknesses. I mean Nathan has heaps of big foiling boat experience but he wouldn't call himself a cat sailor. Jason (Waterhouse) and Lisa (Darmanin) – (the Rio 2016 Olympic silver medallists) – have spent so much time in the Moths. But Nathan has obviously been exposed to such innovative people at the America's Cup.”

With Artemis deciding not to challenge for the America's Cup this time Outteridge was looking at what projects to do next. At the same time Jensen got an offer from the British America's Cup team. So, although it is early days – this is just their third event together – are they going to try and qualify for the Tokyo (Enoshima) 2020 Olympics?

“If an opportunity came up in Auckland then it could happen,” Nathan admits.

“Alternatively, if we're going pretty well in the Nacra it would be difficult to walk away from. It's not 100% that we'll try for Tokyo but if results go well we could be competing next year.”

And calling mum and dad to let them know all is well.