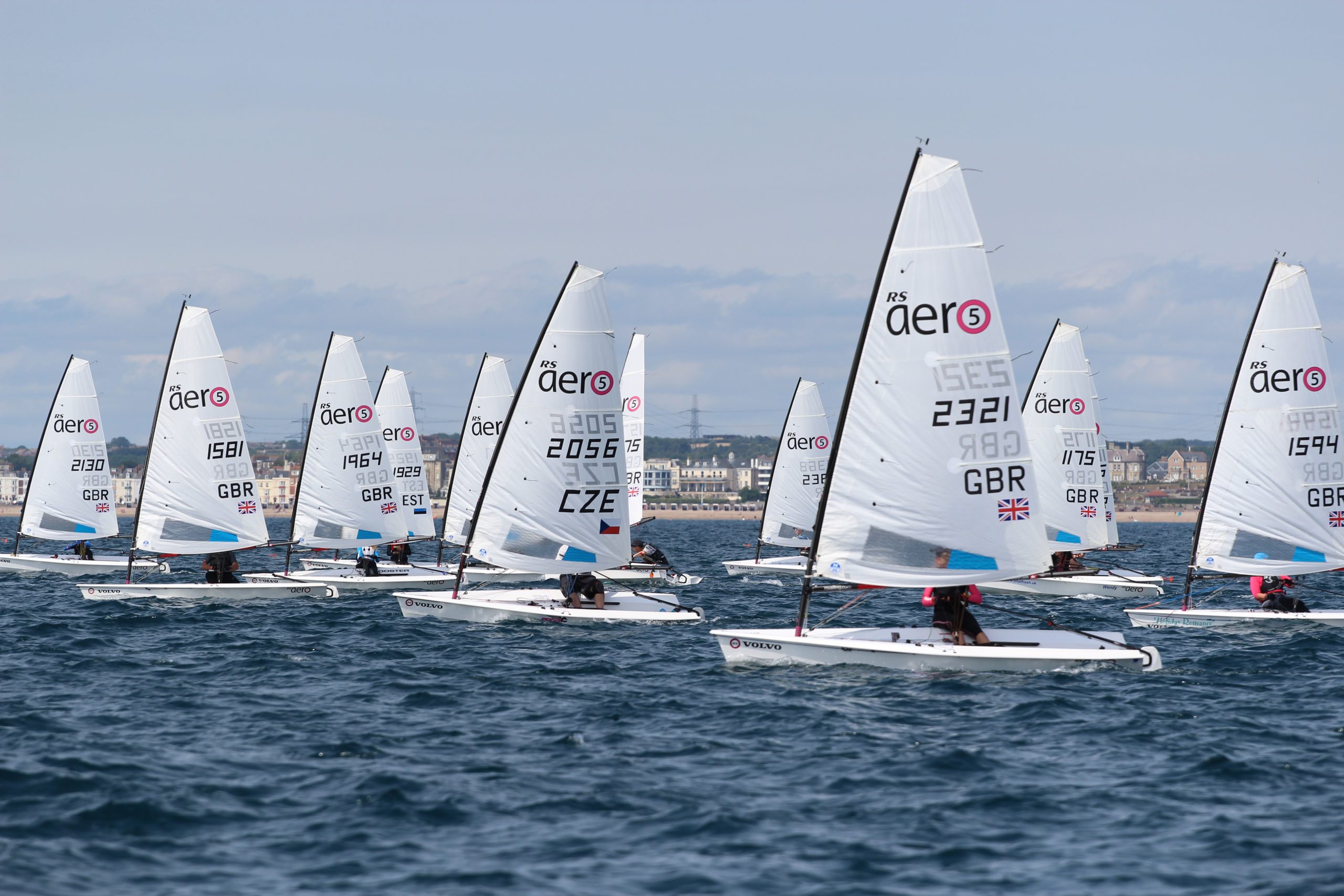 Under blue skies and light winds the 205 RS Aeros launched for their Worlds for Day 2 with 3 races set on Weymouth Bay. However, as the fleet reached the race course a shifty 12-18 knots buffeted the race course for the rest of the day providing some challenging and rewarding racing for the three RS Aero Classes.

Fair dinkum, 8 hours on the water and 3 races, pommie beer and cold pasta never tasted so good, after a fair dose of anti inflammatories and magnesium supplements this little black duck is going to sleep well tonight.

Madhavan Thirumalai USA wanted me to mention that today was the first time he led a worlds fleet around the first mark, well done Madhavan, pity about the 70 degree wind shift which abandoned the race.

The massive 103 boat entry in the RS Aero 7s has required the fleet to be split into two separate qualifying flights before progressing to gold and silver flights later in the week.

Race wins went to Alistair Goodwin, Sam Whaley, and Steve Cockerill with scores still tight at the top of the score sheet before the last day of the qualifying series tomorrow.

The sun dawned on day two and although winds were predicted to increase throughout the day, the morning sunshine and light winds belied what was to come. 60 RS Aero 5s left the slips in good humour with X Y Z hoping to maintain their standings. They were being actively chased by. A B C and in the wings one or two heavy weights were praying to the wind gods that it would increase before the end of the day.

Race 1 gave the opportunity for people to get into the rhythm with relatively light winds. After a general recall, with the warm sunshine, the wind was fairly stable and 1st was William Caiger, 2nd Liina Kolk, 3rd Kate Sergeant. For those that having been following the ongoing contest between Julie Archer and Jackie Craven; Julie lead for most of this race and then on the final beat and error of judgment cost the her the race from Jackie…. she tacked off to ensure she made the mark with room to bear away, seeing this Jackie took to the opportunity to keep her boat flat, pinch a little and she snuck in a the last windward mark and with her down wind speed always good Archer could not come back from that although they were bow to transom at the finish . That made the tally 2 races to Jackie, 1 to Julie and 1 point between them in the series.

Race 2 delivered an unexpected wind shift on the second beat, along with an increase in wind that saw some significant gains and losses through the fleet. As Kate Sargent said “It was good to see new and varied faces at the front- It gives people a real opportunity to see what it’s like without most of that traffic in front of you”. Julie & Jackie missed their usual battle as they went different ways and Julie gained the advantage beating Jackie to the finish by several boats and instead battled it out with Steve Stewart from the YDSC. Julie would like to thank him for the coaching on Sunday as only half a boat separated them at the finish….Cheers Steve. First William Caiger, second Ben Poe, third Ben Hutton-Penman

Race 3 was delayed as the 9 fleet second race was abandoned due to the wind shifting significantly early on their first beat. The PRO was challenged by the shift; local knowledge says if it gets warm it will shift back and true to form it did for the 9rigs to get off leaving the 5’s ready to start. The wind increased for most of the race which again resulted in different faces at the front. Sammy Issac Johnson said “ It was shifty…. so don’t follow me and James Dowrick as we got it wrong again….. Alice Lucy was in complete agreement with that last statement. Andrew Frost was unable to comment as he had gone to prepare for the evenings entertainment by donning his penguin costume.

On the girl fight front Julie got her best result of 17th which, importantly, should see her in front of Jackie on the overall stakes. Sylvia 1162 CZE summed the day up with “too much wind shifts in the end race… in Central Europe the water is much flatter” 1st Andrew Frost, 2nd Lina Kolk, 3rd Ben Hutton Penman.

Game on tomorrow when the bigger winds arrive… will the leaders hang on or will the heavyweights make their mark?

Tomorrow after racing we have RS Aero International Mixed Pairs Stadium Racing starting and finishing in the marina. Pairs of male and females sailors will race in a small fleet race and have their scores combined to progress to the finals and then the medals.

In the evening we have another sold out restaurant when 60 RS Aero sailors will convene at The Stable Pizza on Weymouth quay. Anyone who could not book can catch up with the fleet at the bar afterwards.