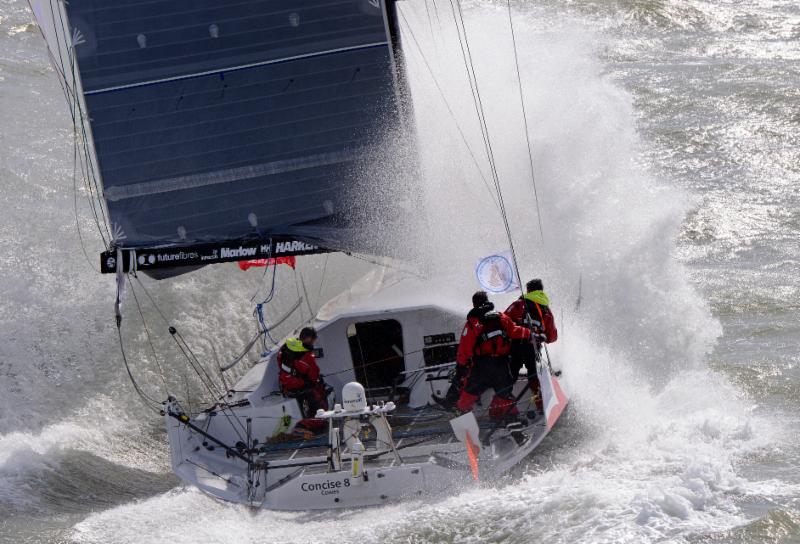 A record number of Class40s will be competing in the Sevenstar Round Britain and Ireland Race starting from the RYS line on Sunday at noon and includes Concise 8 © Rick Tomlinson.

The 2018 Sevenstar Round Britain and Ireland Race has a record entry of Two Handed and Class40 teams. Twenty-nine teams in total will line up for the start on the Royal Yacht Squadron line in Cowes at noon on Sunday 12th August. 10-15 knots from the south is forecast, giving fast reaching conditions as the fleet head east out of the Solent. Later in the day, the wind is due to shift to the southwest and freshen to 20 knots, pressing the teams into upwind mode as they head along the southern headlands of Great Britain.

Well over 100 intrepid sailors from all over the world will race non-stop around the notorious 1,805 nautical mile route. Just finishing the race is a massive achievement; winning class will be monumental. The yacht with the best corrected time under the IRC rating rule will be awarded the John Illingworth Trophy. The organising authority, the Royal Ocean Racing Club are all set for the race and a hero's welcome for the multi-national teams at the finish back in Cowes.

Eleven pocket-rocket Class40s will be racing; the 40ft Monohull World Record for the race was set in 2014 by Roderick Knowles' Swish (8 days 19:06:49). In the right conditions, all of the Class40 teams competing this year are capable of breaking that milestone. The Class40 Line Honours winner will receive the Lekeitio Cup.

Paralympic sailor Hannah Stodel is hoping to becoming the first disabled sailor to take on and complete the Vendee Globe. She has chosen Region Normandie, the Class40 as her training for this and the Sevenstar Round Britain and Ireland Race represents an early test on her journey.

Briton Phil Sharp racing Imerys Clean Energy is amongst the favourites, ranked third in the world for 2018, the skipper is aiming to become the first Class40 sailor to win the Route du Rhum for a second time. However he is not the only Class40 sailor with big ambitions. Hannah Stodel has won three paralympic sailing world titles and this race represents an early test on her long term ambition to race in the Vendee Globe. Sam Goodchild is also in preparations for an assault on the Route du Rhum and will be skipper on Peter Harding's Phor-ty, alongside two-time Vendee Globe sailor, Mike Golding.

The most experienced team will be Halvard Mabire and Miranda Merron's Campagne de France, this will be Miranda's sixth race, including setting a world record with Sam Davies in 2006. Oman Sail will also be racing and French skipper Sandrine Pelletier will lead an Omani crew. The husband and wife team of Chris Frost and Elin Haf Davis will be racing Aparito with Pip Hare. Chris says the most challenging part of the race will be managing Elin's unrealistic expectations!

A record 10 teams will be racing with just two crew in the Sevenstar Round Britain and Ireland Race; finishing the race will be a memorable achievement. Only three Two Handed teams have successfully completed the race in previous editions, including Briton, Ian Hoddle who is back with Virgin Media Business, racing with Ollie Wyatt. Irish Sailor of the Year, Conor Fogerty will be racing Bam with Simon Knowles. Briton Gavin Howe, who has raced the course in both a sail and powerboat, is racing Tigris with Sam Cooper. All three teams will race Sun Fast 3600, which should prove to be a monumental battle.

Two sailors from the winning team of 2017-18 Volvo Ocean Race will also be taking on the race Two Handed; El Velosolex Sl Energies Group's Benjamin Schwartz and Chen Jin Hao both raced with Dongfeng for their epic win in July. For Chen Jin Hao (aka Horace), this will be his second Sevenstar Round Britain and Ireland Race, having come third in the VO65 class in 2014. RORC member Charles Emmett will be racing his classic Sigma 36 British Beagle Two Handed with Tim Winsey and the team are likely to take at least 10 days to complete the race.

Two well campaigned British yachts will have a private duel in IRC 1, Mark Emerson's A13 Phosphorus II will be taking part in their eighth RORC race for the season. Giles Redpath's Lombard 46 Pata Negra has raced over 7,000 miles in the last six months, including two Transatlantic Races.

The British Army has a long tradition in offshore racing and nine serving men and women will race the Army Sailing Association's entry X-41 British Soldier. The crew are Private Soldiers, Sergeants and Captains, right up to Colonels. However, military rank is subordinate to position on the team for the race. The Oxford University Sailing team will also be taking part in their first race on board Prima 38 Talisman.