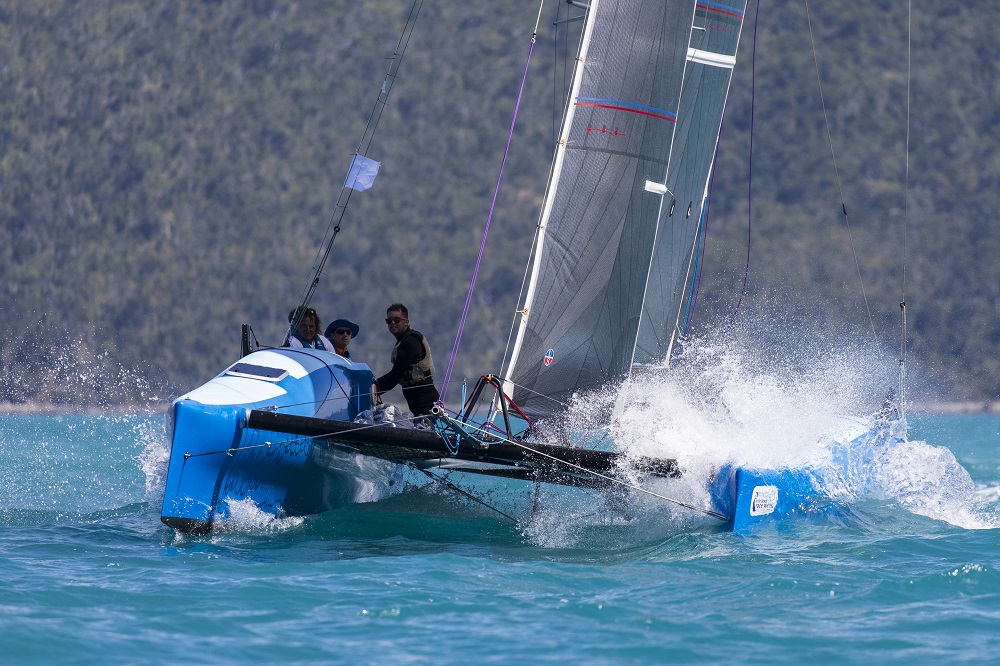 It is morning on Day 2 of the 30th anniversary Airlie Beach Race Week and Race Director, Denis Thompson, says to expect another fine sunny day with south-easterly winds in the 10-13 knot range, dying down in the afternoon and moving into the east.

Thompson has planned the day around a very low tide this afternoon, with racing to get underway early at 10am. The big boats will sail a course around the Molle Islands and White Rock, while the smaller boats will do a shorter course taking in the Molles.

Among competitors taking part in the Whitsunday’s annual Airlie Beach Race Week Festival of Sailing are five generations of skiff sailors – some still going strong, others in retirement mode.

At the more mature end is 1968 (Kaiser Bill) and 1972 (on Nock and Kirby) JJ Giltinan (world championship) title holder, Dennis Lehany, from Tin Can Bay in Queensland. Lehany is sailing his 6 metre trimaran with his 1972 World’s crew, John ‘Steamer’ Stanley, who admitted to have entered his 70’s.

The two have not lost it – sailing Billy the Kid to a win in the Multihull Passage division. Look out you young bucks.

Following the race, Steamer, from Sydney, said: “We had fun out there and it’s great to be here sailing with Dennis again,” adding, “It’s great to see so many mates from the skiffs sailing here.”

Tonight’s prize giving will be held at the Reef Gateway Hotel, with entertainment from Breeze Duo.