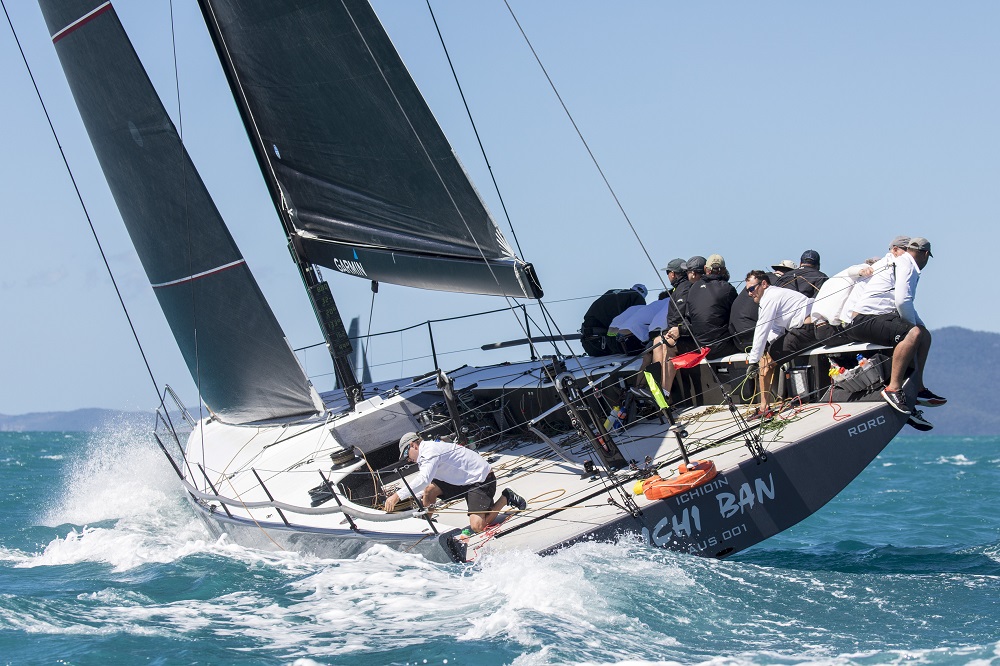 Geoff Williams cranked up Luke Ratcliff’s Viper 640, Heat, thumbing his nose at the Tasmanian RP66, Alive, the two Sydney TP52s, Ichi Ban and Hooligan, along with others of that calibre, leading the entire fleet until the expected 15-20 knot breeze funnelled through and the bigger boats mowed the little sports boat down.

On board Heat from NSW were three Ratcliff siblings, Luke, Paul and Kristen – the combination obviously worked well, as they took out the Sports Boat division from Situation Normal, a Shaw 650 from Queensland which finished just shy of two minutes adrift.

Williams, who has been honing his steering in the Laser Masters class, said: “We really enjoyed the day – how could you not? There was lots of chaos at the start, having big and little boats, with some trimarans thrown in for good measure.”

The friendly rivalry between the two TP52’s goes further than their two owners – as there is a Merrington brother aboard each one. Peter is aboard Hooligan while Anthony is racing on Ichi Ban. Their mother Rosemary is on the finish boat, and dad, Steve, is on the jury!

Blackmore, of course, enjoyed his win. “Interesting day – it’ll be an interesting week between Matt’s boat and mine. There was little in it today. I think we’re a bit faster off the wind and we got a better start – they got boxed in a bit,” he said.

“The breeze died off towards the end of the race, so we took a bit of time out of Ray’s boat (Team Hollywood, a Botin 40 which finished third). I think they’ll give us a bit of curry this week though,” said Blackmore, whose crew includes Spanish sailing star Juan Vila navigating and Joe Turner on tactics, along with all-round man Richie Allanson.

Blackmore, with his usual candour, admitted, “Sailing on my boat is quite intense. I’m half deaf and have a few people yelling instructions at me, but we get there in the end. We debrief at dinner and discuss what we could have done better – we’re a close knit crew.”

Second place went to the equally famous Condor (Sydney Hobart line honours in 1983 and 1986), which does charter duty in the Whitsundays these days, so her crew will be over the moon with their ex-skiffie skipper, Dave Molloy.

As forecast, Brett Whitbread’s Fareast 28R, Pipeline Drillers is the hotshot in the Performance Racing division and also for the Fareast Australian Championship title. The Queensland crew picked the winnings from both –their nearest rivals were Bill Trueman and crew on Goggo Chikara, a Murray30 Sports Boat from the host club by nearly 10 minutes.

Multihull fans were taking bets on their favourites in the Multihull Racing Division. Would it be a Kiwi or Aussie victory? That question was answered when the top three spots went to the Aussies. Last year’s winner, Ullman Sails skippered by local Paul Mitchell, won they day from NSW entry Morticia (Shaun Carroll) and Queensland’s MCJAK (Shaun Jackson). All in all it was a good day for Queensland competitors.

Race Director Denis Thompson was pleased with this new innovation: “It was a perfect breeze and everyone behaved – nobody was over the start early. A good first race – competitors will have had a good day out and will all be buzzing when they finish later this afternoon.”

Weather models are predicting more of the same for tomorrow, which will, without a doubt, make everyone happy.