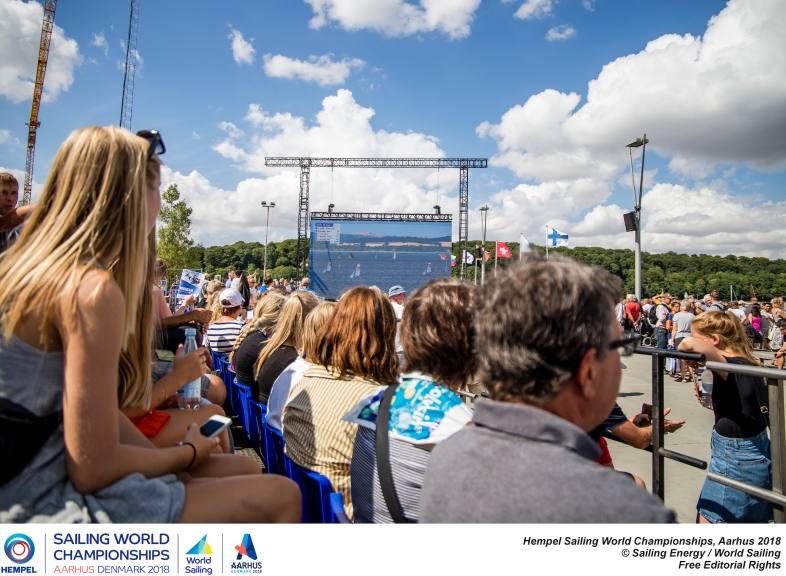 6 August 2018 (Aarhus, Denmark) – Global TV sports producer and distributor Sunset+Vine has confirmed that the Aarhus 2018 Hempel Sailing World Championships is the most successful to date in terms of potential audience reach. This year’s event, which is taking place in Aarhus, Denmark, until the 12th August, has already eclipsed previous Sailing World Championship events in Perth (2011) and Santander (2014) in respect to the number of broadcasters confirmed to take live or highlights programming from the event.

To date, fifty-nine broadcasters will be taking a mix of live or highlights programming from the championship. This compares to four in Perth 2011 and twenty-four in Santander 2014. Potential reach is expected to dwarf the previous record of 182 million households and almost 8 million subscribers when this is assessed post-event.

In addition to DR, the Danish host broadcaster, the line-up of international broadcasters on board include, amongst others, Fox Sports (Asia, Australia and Latin America), ESPN USA, BBC (Red Button), CNBC (Emea, Apac and Latin America), OSN, TVE Spain and SuperSport. As well as being able to follow the Hempel Sailing World Championships on TV channels around the world, sailing fans will be able to watch online, free of charge via World Sailing’s YouTube channel/Facebook pages and the Olympic Channel on the Medal Race days.

Sunset+Vine has a team of 60 in Aarhus producing and distributing eight days of live Internet coverage of the qualification series [2nd-8th August] plus four days of live television coverage of each of the 10 Medal Races [9th-12th August]. In addition, the company is producing, and internationally distributing, four medal race day highlights programmes to television and digital broadcasters worldwide. Furthermore, it’s Media Partnerships division is creating and distributing all news, digital and broadcast coverage from the championships.

Andrew Preece, Executive Director at Sunset+Vine, commented: “We are delighted with the impact we are having both on and off-screen, to make this edition of the Sailing World Championships the most successful ever for viewers and broadcasters. We have dedicated our largest team to date to bring live coverage, of up to nine races a day, to a truly global audience. The field of play is around 80 square km, so we’re deploying drones, helicopters and on-board cameras to ensure we capture all the action.

“These Olympic classes world championships have given our media partnerships team the opportunity to take the coverage to the full spectrum of media outlets from broadcasters to their .coms, digital channels, news desks and social communities. The foundation of 59+ broadcast networks is reinforced by the multi-platform distribution that our digital, news and social distribution teams are able to leverage.”

Andy Hunt, CEO of World Sailing added: “We are delighted that Sunset+Vine is our host broadcast and distribution partner for one of our most significant Sailing World Championships. Their expertise in delivering high quality, robust and innovative sailing coverage is complimented by their ability to deliver that content to the broadcaster, news and social networks of the world and to help us take our sport to the mainstream sports and sports fans right across the globe.”

The Hempel Sailing World Championships Aarhus 2018 is the largest world championships in history. This collective world championship happens just once every Olympic cycle and with two years to run until Tokyo 2020 it is of huge significance to everyone with an Olympic aspiration – whether that is to win a medal or simply to represent an emerging sailing nation. It features all ten Olympic sailing classes plus Kiteboarding. Some 1500 participants from over 100 nations are competing in 1100 sailboats over two weeks in a bid to win World Championship medals and, for many, to seek qualification for the Tokyo 2020 Olympic Games.