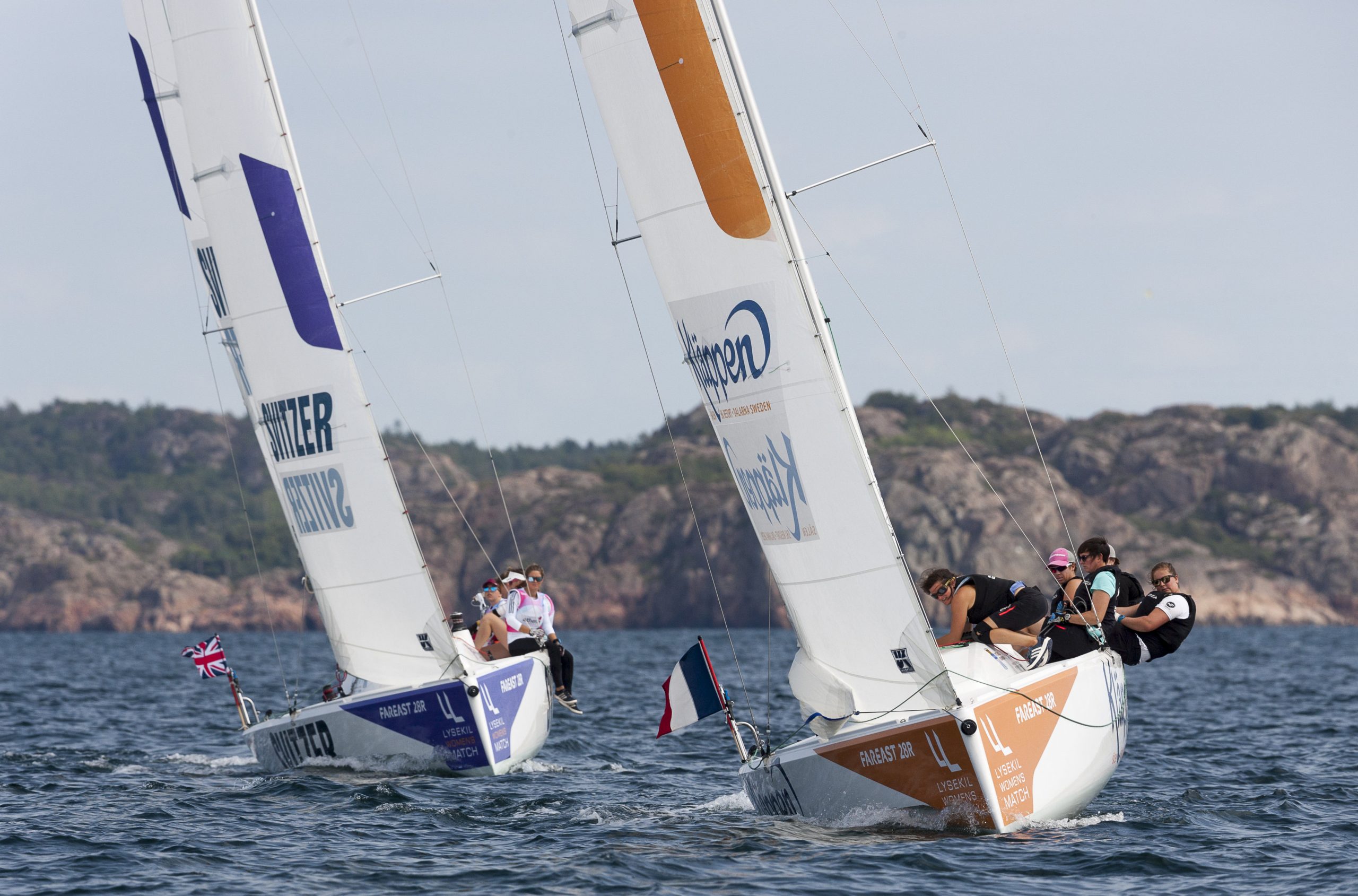 Match in Pink by Normandy Elite Team in the lead after day one in Lysekil. Photo: Dan Ljungsvik.

Last year’s WIM Series winner Pauline Courtois and her crew maintained a perfect track record, having won all of her matches during the first day here in Lysekil and is at the top of the score board. But it is a close race behind her with four teams tied for second place behind the French team.

Today was the 1st day of Lysekil Women’s Match 2018 and the sailing arena has treated us to spectacular conditions with sunshine and light but stable south westerly winds, near perfect weather conditions for match racing. All crews will initially face off against each other in a round-robin to determine who will proceed to the quarter finals. During the day we managed to get through half of the racing in this initial stage and in the lead we find the French team Match in Pink by Normandiy Elite Team, skippered by Pauline Courtois, the only team that remains undefeated in the competition.

”All matches are difficult and every situation is different, this is only the first day, but of course we are happy to be in the lead. We won all our pre-starts and managed to maintain our speed, which made it easy for us to stick to our strategy out on the course. We also didn’t get any penalties, but tomorrow we are facing of against the higher ranked teams and we will have to focus and take it match for match,” says Pauline Courtois.

But the French team aren’t leading by much, as four teams behind them are tied for second with four wins each. Out of them are two Swedish teams; Johanna Bergqvist (Bergqvist Matchracing) who took second place in the last WIM Series event that took place in Helsinki earlier this summer and really impressed with her cool during today’s racing, but lost her final race of the day to Anna Östling (Team Anna) currently the number one ranked women’s team in the world, also with four wins.

“The girls have done a fantastic job today, and everything felt very solid until that last match really, where we probably did every mistake possible, but perhaps it is good to gather all in one race,” says Johanna Bergqvist and continues, “Of course there is some prestige in winning a Swedish derby, but hopefully we get a chance to face Anna later in the week.”

The other two teams also sitting on four out of five wins are Danish Henriette Koch, with her experienced Women On Water/Team Kattnakken, who secured two of her victories in spectacular fashion, winning despite taking penalties on the finish line. And finally Claire Leroy stepping in as skipper of New Sweden Match Race Team making a grand comeback on the matchracing scene.

On Wednesday, the round-robin continues with good weather conditions and good winds. The competition starts at 9.30am.